My friend Jeff just went away on a one-year world tour. Unfortunately, he's got my important research on his computer. Of course, it is locked by password. I tried to get a hold of him, but I can't reach him on his phone. He might already be on the top of Himalaya...

So I went to his house, searched his office for any Post-it note or other clue he might have left and finally stumbled on a piece of paper with his writing. Can you help me decipher it and find his password?

I'm known throughout the world
Even though I'm no more the tallest
I'm starting to get old
But one day per year, I'm still on my brightest

My half-sister lives in a far away country
Near the ocean, while I'm stuck in the city
I could be called an iron lady
But please don't, this one's historically my enemy

"The answer is the key, in more sense than one?"

The answer to the riddle (not the cipher):

I'm known throughout the world

Even though I'm no more the tallest

I'm starting to get old

But one day per year, I'm still on my brightest 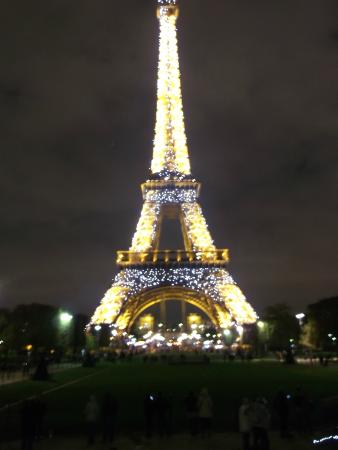 My half-sister lives in a far away country

Near the ocean, while I'm stuck in the city

is placed pretty near the ocean (on an island).

I could be called an iron lady

That's how the Eiffel Tower is called

But please don't, this one's historically my enemy

"The answer is the key, in more sense than one?"
As Rubio pointed out:

the numeric strings are geo coordinates:

So the first sense of the answer being a key is

all the locations present some kind of Eiffel Tower.

The second sense is the key to the cipher below as @Ivanhoe commented:

which is Vigenere's cipher with key "EIFFELTOWER"

I am sorry for wrong deciphering - I had some letters mixed up (switched 'p' and 'q' don't ask me why) - now it should be correct (thanks to @Ivanhoe again).

It is from Vegas, so the language is english.
iamtheeighteenthchildofmendeleiev (in english he is spelled Mendeleev, right?)
Riddle:
I am the eighteenth child of Mendeleiev
Answer:
Argon (Ar) (18th element in Mendeleiev's periodic table)

This is from Paris, so the language is french
jesuiscequivientavantcequejepossede
Je suis ce quivient avant ce que je possede
Riddle:
I am what comes before what I have.
Answer:
my, as it comes before i.e. "my car". In french that would be ma, mon or mes.

This is from Tokyo, so the language is japanese
ichinoatowatashiwakimasu
Ichi no ato watashi wa kimasu
Riddle:
I come after one
Answer:
two which in japanese spells ni

The deciphered parts together make

Armani, Armonni or Armesni
So the password is likely to be: Armani as it is the only proper word from the three (Giorgio Armani is the founder of a famous Italian fashion house).

the numeric strings are geo coordinates:

an Eiffel Code (Caesar cipher with shift of 6)

but it seems not to be. So now I am at a loss on how to proceed.

Not the answer you're looking for? Browse other questions tagged riddle cipher rhyme or ask your own question.

23
The Hunting of the Snark: Given ciphertext and plaintext, what cipher is used?
6
Mathematicians Death Bed Password
8
8-bit Lock and Key
12
Sheerluck Helms and the STRIKE Assassin
12
Finding Detective Jack!
11
Password Strength
8
The Boy of Fire: The Final Battle
15
You may not be eligible to be in this community
2
Keep calm and riddle me this