Based on a puzzle given to us by Jamal Senjaya I created a bigger one. Hope it is not too easy. 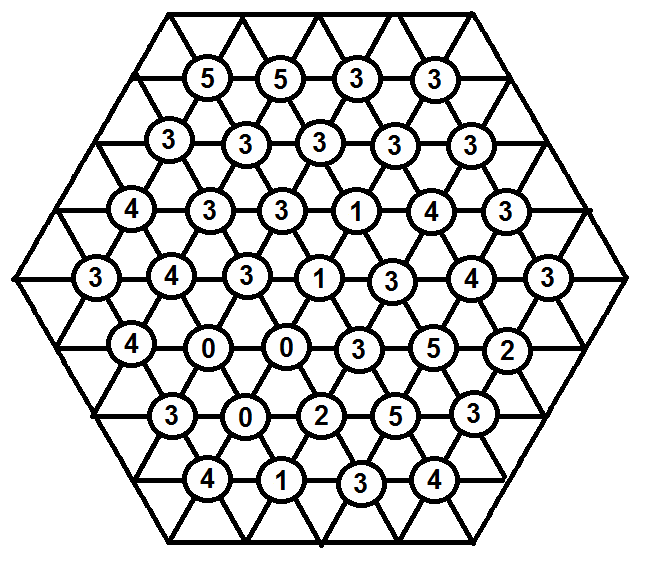 The number in circle means how many of adjacent triangles should be painted blue.

EDIT
I did not mention (I was not aware) that the puzzle has many (I hope not too many) possible solutions. There is one however that "makes more sense" - if you see it you will know that this is it. All valid solutions will earn an upvote (hopefully not only from me), but only "the one" will be accepted. The desired solution can be distinguished by the fact that the resulting image is a 4-letter word.

This displays the missing verbal ingredient, which certainly does add a nice dimension to the puzzle. 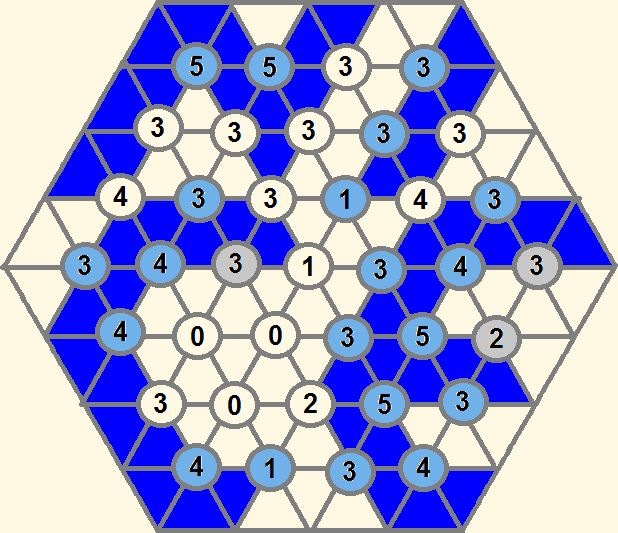 Began with Jonathan Allan’s report of which triangles had certain values, then considered the four-letter hint, noticed what the third letter must be, and defocused for the rest.

Arrows point where the goal of forming letters suggested filled-in triangles in the top half. Each suggestion led to a few more forced values, until three fairly-certain letters were apparent. 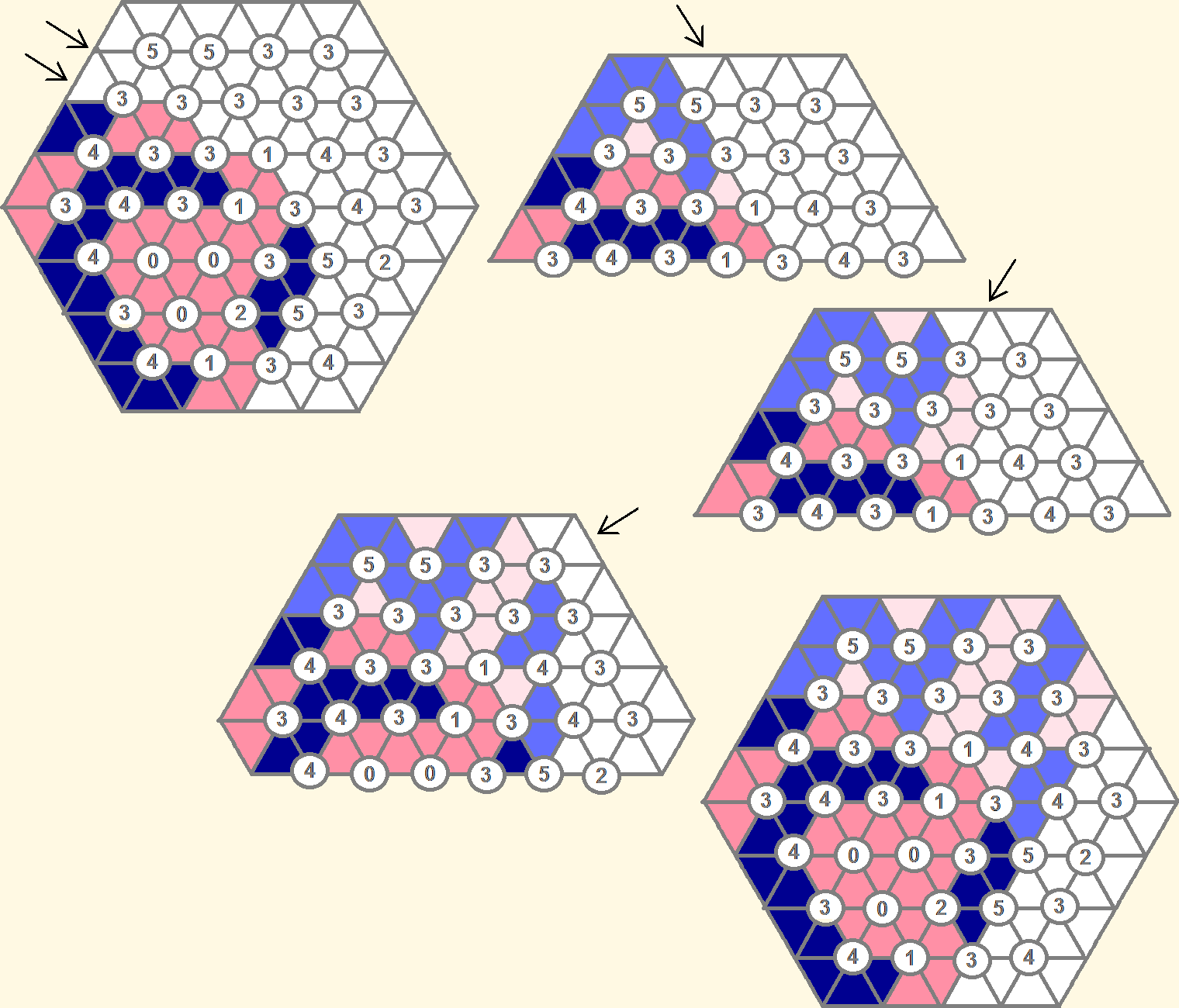 Here is another possible solution, with a first stage that is necessary:

Red means can't be blue in the top image and blue means must be blue, the second image is then one way to fill in the rest. 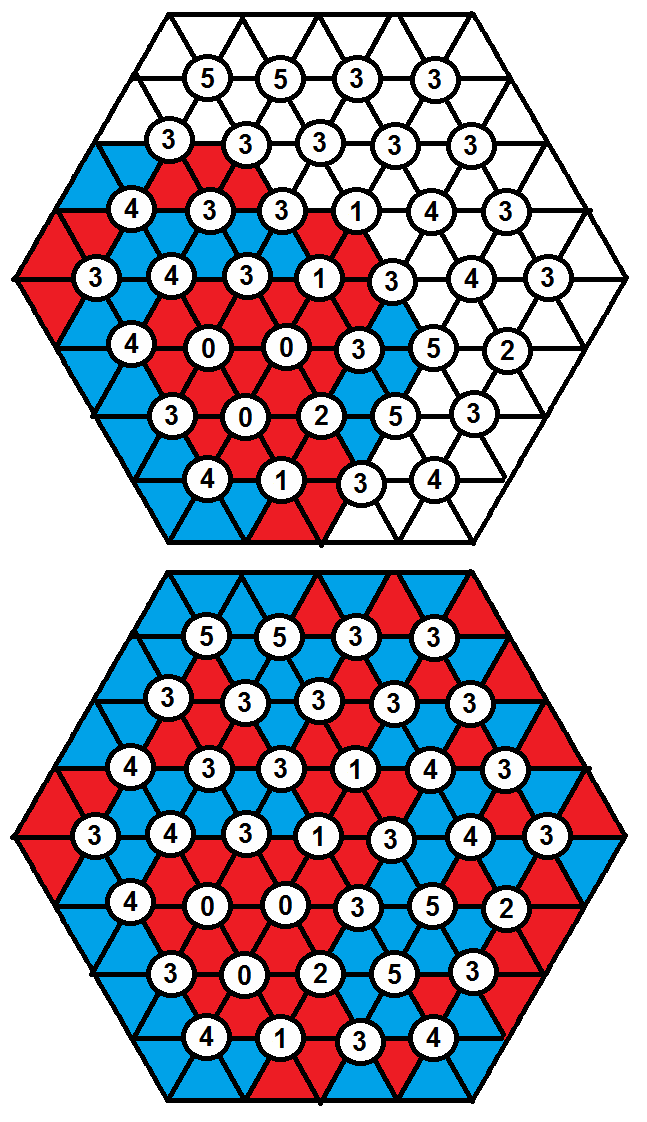 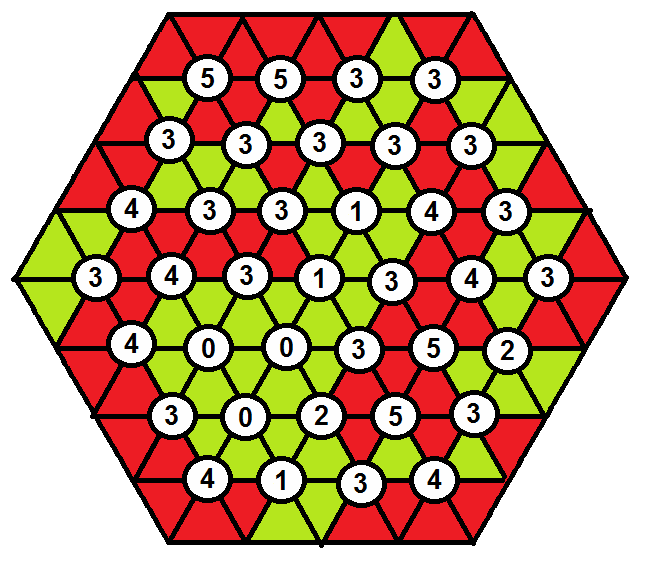 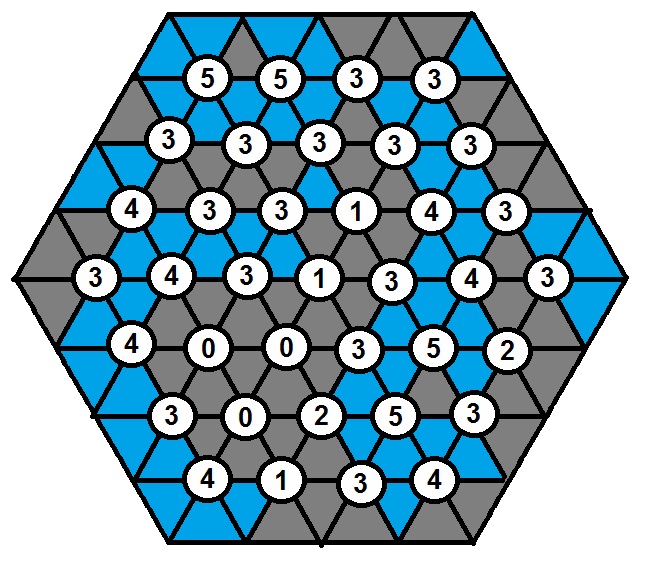 I actually started at the top with the two 5 nodes and just worked my way around. I did the 0 nodes before messing with the surrounding nodes, then did the 1 nodes, then the other 5 nodes. Everything else was kind of random, but I didn't have to re-do anything.

Blue are "blue" nodes. I used gray to say "this can't be a node" as I went along, then left it that way when I finished.

I made a little program to demonstrate this puzzle. It is an interactive thing that you can click on and off to select "mines". I made blue the color of the safe spots, and red the color of mines. White is simply unselected: 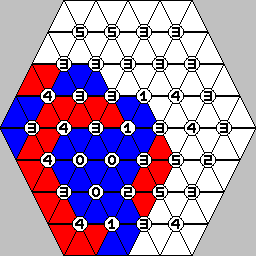 It is the only spots I can prove are filled in that manner.

Not the answer you're looking for? Browse other questions tagged geometry visual or ask your own question.

15
Triangles tiling on a hexagon
5
How many solutions does a hexagonal minesweeper have?

25
Tiling a Hexagon with Diamonds
15
Black and White
13
Professor Halfbrain and the right-angled triangles
4
How many boxes do you see?
12
Unlucky tiling: Arrange thirteen right isosceles triangles into a square
8
Geometry haberdasher problem - square to equilateral triangle variation
12
Density-type puzzle: Is This Too Difficult?
22
Density in Den Sitting
20
Sudoku in Technicolor!
3
Infinite beauty