Wish I’d had a camera at the time but a cartoon will have to suffice, representing two actual incomplete rainbows that stop in midair where they meet, lit only by a setting sun.

This seemed so paradoxical, I honestly wondered if it was a dream. After all, on a normal rainbow with two arches, the arcs do not touch and the larger one is very much fainter with a reversed spectrum. The arches schematized here were indeed accompanied by typically-faint concentric larger arcs that also stopped abruptly where they, too, met, exactly above the main meeting point.

Being awake, as it turned out, I discovered the simple explanation for this, related to an often-subtle and less dramatic everyday phenomenon that is readily understandable in nonscientific terms. I had enough information at the time to solve this like a puzzle, though, and now you do too.

What was that simple explanation for this odd pair of rainbows?

Notes. Only air was between the point of view and these rainbows. The less complete rainbow, to the right, is slightly brighter and both arches brighten the air directly below them. The picture has been revised to more clearly represent how the rainbows end at slightly different places, muddled by their overlap.   The larger arch ends a little to left (and slightly up) from where the smaller arch ends.   The rainbows were not as thick as depicted (none are) and had further characteristic features that scientific photography would reveal to extend a vertical pattern of similar meeting points.   Safe to guess that this effect was not observed by humans more than a century or two ago, although tiny animals may have experienced it over the course of eons.   Some details of the real-life story have been altered in an attempt to stymie internet searches.

Here is an added diagram meant to emphasize that the position of a rainbow depends on the direction of incoming sunlight and that the size and distance of any rainbow are intrinsically ambiguous because the mist that creates a rainbow is rarely at a single distance and the resulting image occupies the same portion of the visual field regardless of actual distances to individual mist droplets. More information can be found all over the internet, such as Wikipedia and (less laboriously) earthsky.org. 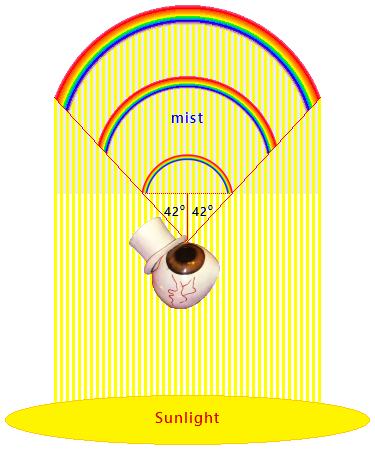 This isn't an answer to the exact question, but the following link is to an image that I thought was worth looking at anyway: 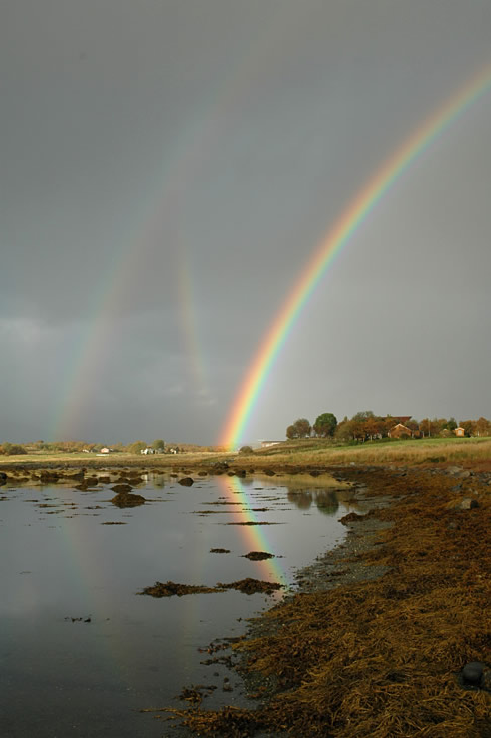 And @justhalf found another image which looks even more like the one in the question, except rotated 90 degrees: 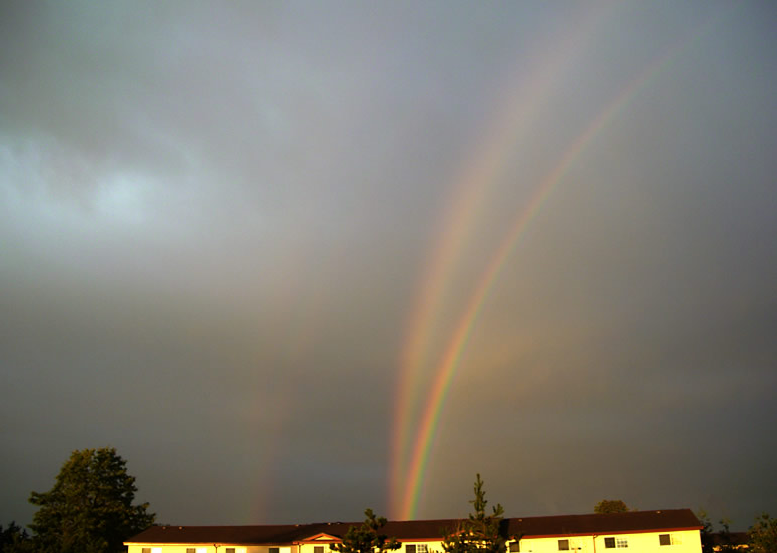 I'm thinking that the actual answer is something to do with

light reflecting off the windows of a high-rise building

The rightmost diagram represents what can happen when the sun sets in a direction almost parallel to the wall of a high-rise building (whose corner is the gray rectangular area with writing) and reflects off its windows. A second rainbow is created by the sun’s reflection, as if there were a second sun, but neither rainbow’s right half is illuminated for different reasons.
• A portion of sunlight for the directly-lit rainbow is blocked by the building.
• Reflected sunlight that would complete the second rainbow (dimmer and left shifted) is not present due to the viewpoint’s position and the sun’s angle.
The building’s vertical wall plays the same reflective role as horizontal bodies of water in the photographs above, which is why the doubling is oriented 90° differently. 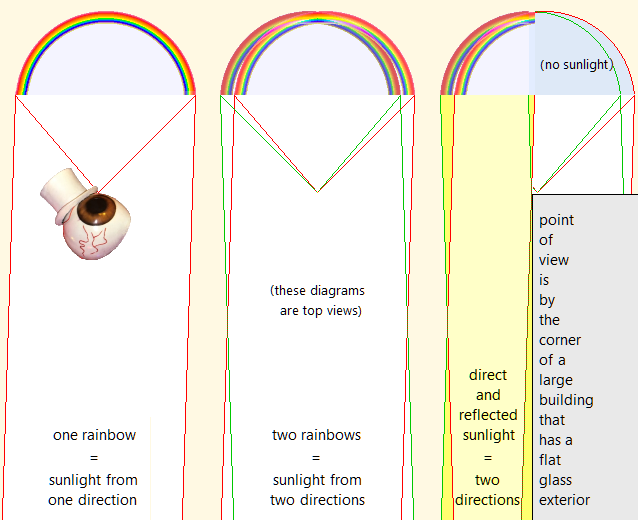 For comparison, shadows are often doubled in a related manner: 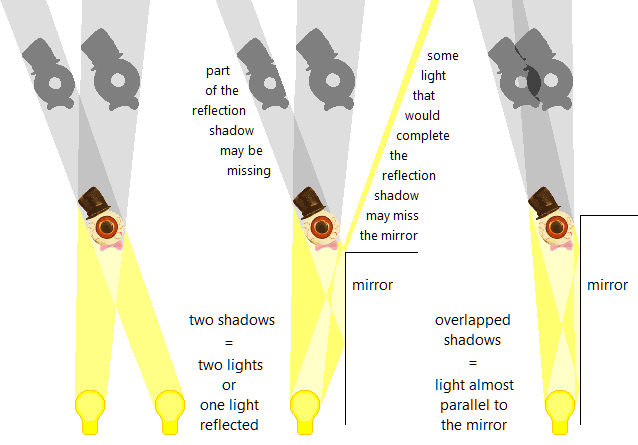 I can't see images now, but from the optics laws ang geometry it follows that the center point of the rainbow's arc is opposite to the light source with respect to your eye. In other words, if the rainbow is directly in front of you, the Sun is directly behind you. If you see two rainbows intersecting, you must have two suns behind you, relatively close to one another.

If one rainbow arc was above the other, its respective light source must have been below the other one. If the arcs were side-by-side, the two suns were at the same height.

Probably one of them was a reflection of the original one in quite a big, almost flat surface. Did you have a lake, or a glass-covered sky-scraper behind you or in front of you when seeing the two rainbows?

If it is only lit by the setting sun

I would guess that the second one came from the sun's reflection from the moon.
Since the sun was setting, odds are the moon was starting to show up already. And since it's only the reflection of the sun, it would explain the different intensity of the colors.
Since the light's point of origin is different, it would explain the different angle of the rainbow. For the 2 rainbows which came from 2 completely opposite source of lights to be generated in a cross arc like this must be very rare indeed.

Probably this answer might be stupid but thought to give a try. Is it

on a normal rainbow with two arches, the arcs do not touch and the larger one is very much fainter with a reversed spectrum. These lines some how tells that it's not a normal/natural rainbow which you tried producing using two prisms. One created a normal looking rainbow while the other created the brighter one. Reason being, there is a little pink color in the rainbow which can be produced due to red and violet combination. Phenomenon may be called "Dispersion of light" Also with small animals and insects the phenomenon called "Visible spectrum" comes naturally.

It may be a

Not sure about the science of it, but here's a shot.

The moon blocks out let's say half of the sun, so only half of the rainbow from the sun is seen. Then there is a secondary but dimmer rainbow coming from the reflected light from the moon, which due to the moon being closer has a wider arc. The only source of light is still the sun, but some is being reflected by the moon. And as to the history of them, maybe people only figured out how to view them without being blinded within the past couple centuries.

You woke up on a boat. This explains why you thought it was a dream. The image is sideways of what it would be from the perspective of someone standing upright. The sea was calm so it reflected the second, dimmer part. As to the recent (last couple hundred years) aspect, this phenomenon may occur at extreme latitudes. All the pictures I've come across were from places very north. It was mentioned in comments that there is a human made component, which I think is climate change. There is now more (calm) sea up north so it is plausible to wake up to a reflected rainbow.

The earth's last warm period before some old ice age? This is still confusing. Were creatures smaller back then? Did they write poetry?

Sorry for answering twice but it's a completely separate thought.

They don't line up because the actual reflection is happening past the horizon.

We know from the other answers, that ...

The first thing that came to my mind were the headlamps of a car, but the question states, that the sun was the only light source. However, the OP confirmed that he was sitting in a car when he saw the rainbows for the first time. One possible explanation would be, that the low standing sun was reflected by two things on the car. This could be either the headlamps (not sure if this would work) or the side mirrors. In the latter case the OP could see the rainbows in the inner mirror while sitting in the car. The rainbows would stop in mid air, because the light is reflected in the form of cones.

At Niagara Falls (or at a place with multiple waterfalls) 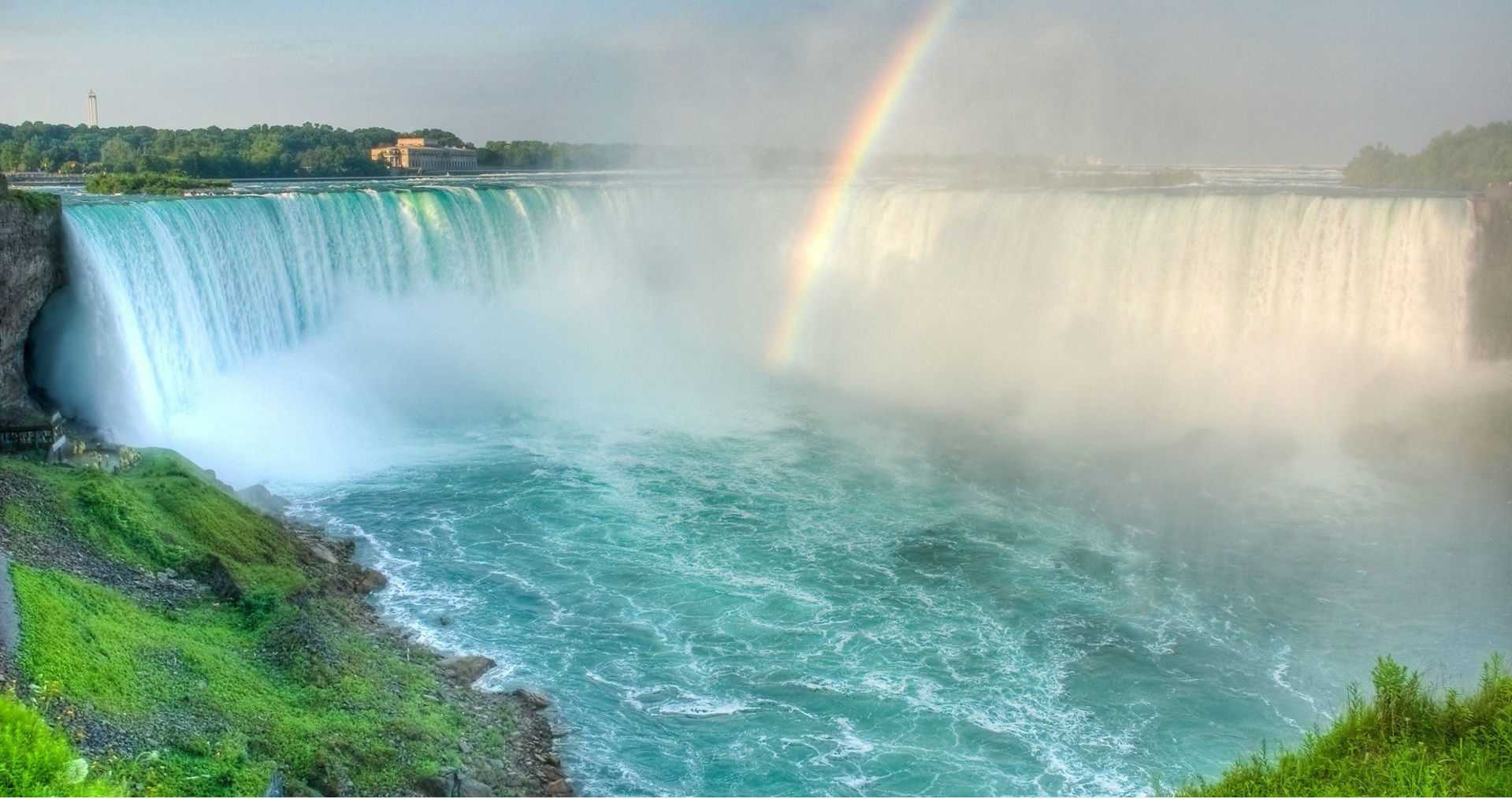 But where there are multiple waterfalls, two rainbows could be created, one behind the other, so if you positioned yourself just right then they would appear to touch. One rainbow is slightly brighter because it is closer.

They are cut off as they go into the waterfall 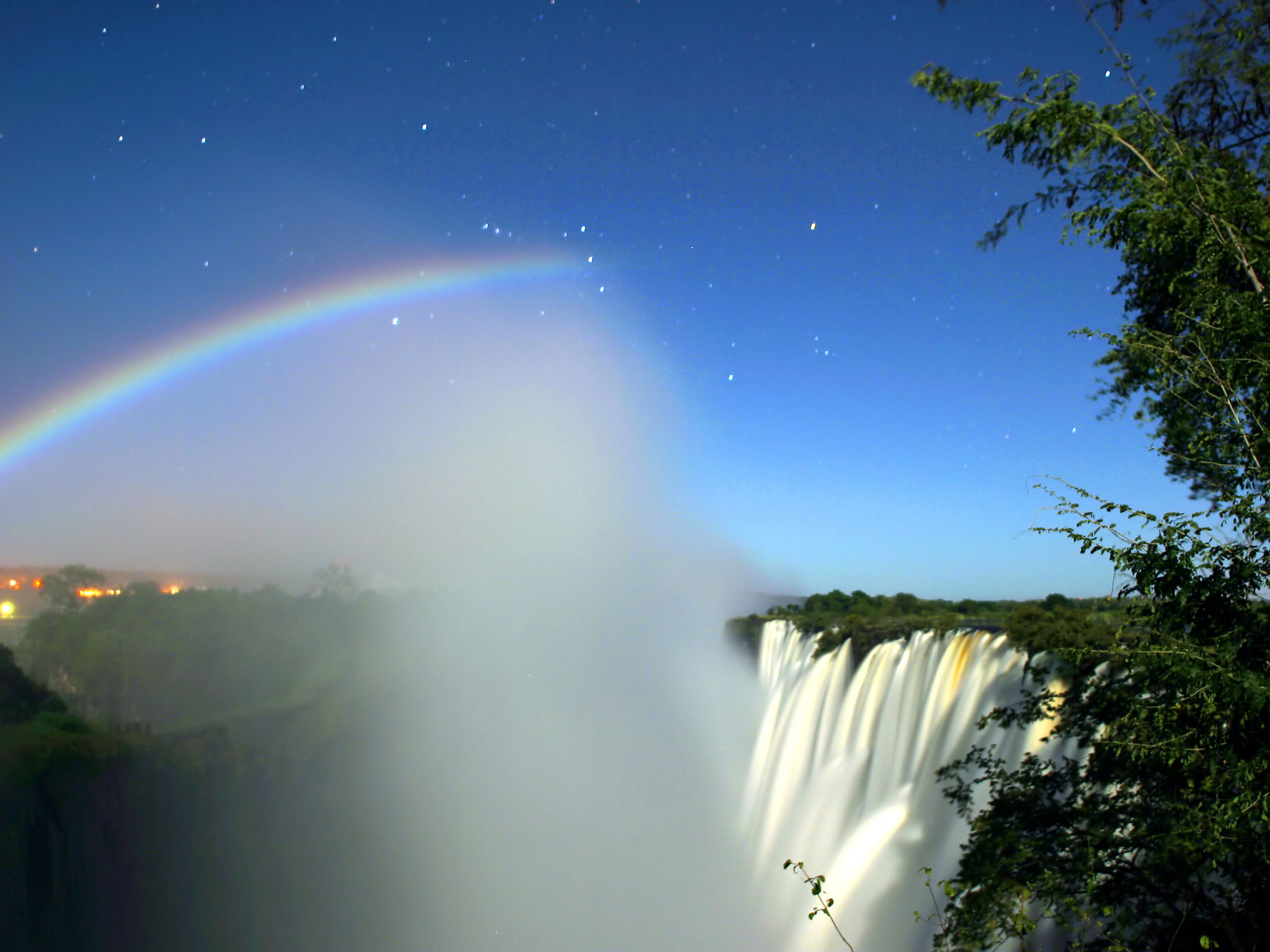 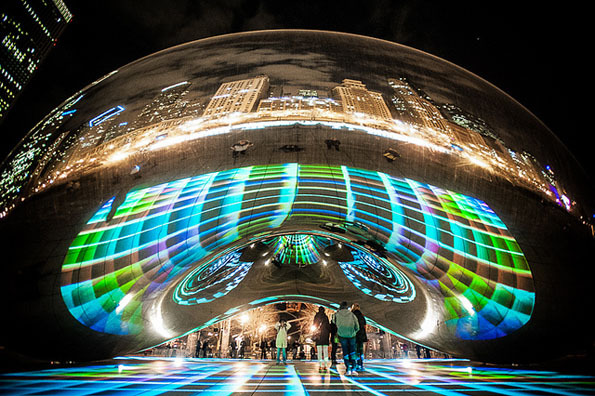 Who cares about double rainbows? 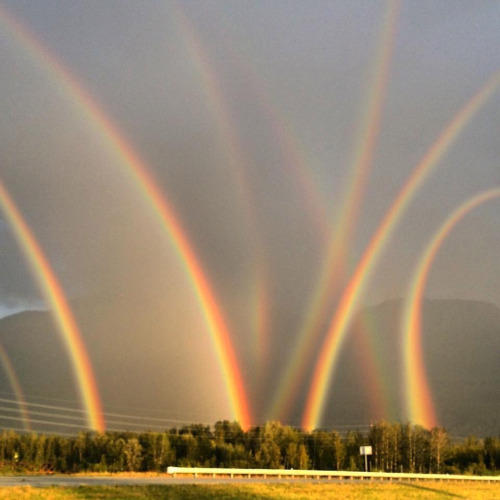 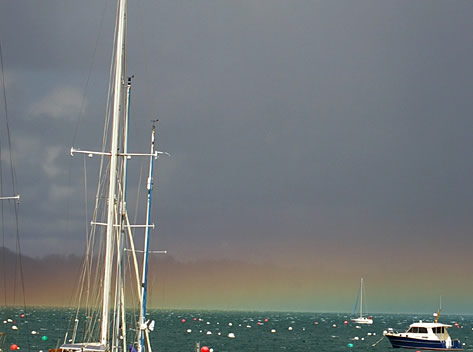 Not the answer you're looking for? Browse other questions tagged geometry visual science real paradox or ask your own question.