A stack of 12 coins that looks identical are to be tested for the unusual one which become slightly lighter on one face and slightly heavier on the other face. If it is weighed standing on its side, it is one gram like other normal coins. A certain weighing scale is available for use.

How many weighings will it take to find the odd coin?

If I've understood correctly, the tool we have is not a balance scale as in the traditional 12-coins puzzle but a weighing scale that tells you (say) how many grammes the coins you put on it weigh in total. The question doesn't make clear whether we're supposed to know the "standard" weight of the coins. I'll address both the version of the question where we do know this, and the version where we don't.

If we do know the nominal weight of the coins

Given that only one coin is odd, and that we know how many coins we're weighing on any given occasion, what the scale tells us is exactly the following: Is the odd coin on the scale or not, and if so is it heavy or light?

each such weighing gives us at most three different results, and after the first (if any) whose result isn't "odd coin not on scale" the heavy-or-light information tells us nothing new. I think a counting argument then indicates that we must take at least four weighings.

if the odd coin is one of ABCDEF then we can do to them what we did above to GHIJKL (we don't even need to use our knowledge of whether the odd coin is heavy or light). Done, again, in four weighings.

If we don't know the nominal weight of the coins

Still keeping all coins a consistent way up unless stated otherwise, first weigh ABCD and EFGH (two weighings). If they come out the same then the odd coin is one of IJKL and we now know the nominal weight of a coin. Weigh IJK. If it comes out right then L is the odd coin and one more weighing will tell us which way it's wrong. If not then we know, say, that one of IJK is too heavy. Now weigh I plus J-upside-down. If this is heavy then I is odd; if light then J; if neither then K. Done in four weighings.

if ABCD and EFGH gave different results then call them $x$ and $y$ where, let's say, $x>y$. Then write $\delta=x-y$; we know that either normal coins weigh $y/4$ and one of ABCD weighs $y/4+\delta$, or else normal coins weigh $x/4$ and one of EFGH weighs $x/4-delta$. Turn EFGH the other way up, so now the odd coin definitely weighs $\delta$ "too much", and weigh ABCEFG. If the odd coin is in ABC, this will weigh $6y/4+\delta$; if in EFG, it will weigh $6x/4+\delta$; in either case we can now weigh A plus B-upside-down or E plus F-upside-down as in the solution to the nominal-weight-known problem given above. Done, again, in four weighings.

if the odd coin is D or H, then ABCEFG will have weighed either $6x/4$ or $6y/4$ depending on which, so now we're actually done after only three weighings.

even if we don't know the nominal weight of the coins, we can identify the odd coin and which way up it goes with at most four weighings.

[What follows was written when I thought the question was about a two-arm balance scale of the traditional sort, rather than a weighing machine that weighs one set of things and tells you the total weight. If I've understood OP's clarifications right, this was not the intended question.]

any solution to the "standard" 12 coins puzzle (e.g., MA DO LIKE ME TO FIND FAKE COIN) will find the odd coin here in three weighings (just keep them all showing, say, heads throughout) and since that also tells you whether the different coin is heavy or light, it will tell you in this case whether the different coin is heavy-when-heads or light-when-heads.

If the offending coin is on the scale, you know the reading will be either heavier or lighter than 12x grams. So, you can do it it in:

In each of the first three cases, if the answer is yes, then

instead of weighing the remaining, you weigh that number of the set you just measured.

Illustration of the measuring process. 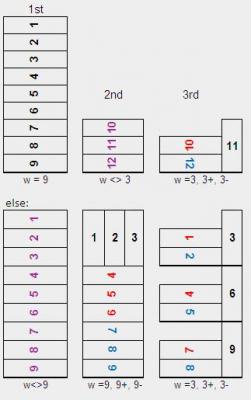 It can be found in:

Three readings. The essence of this solution is to: first, find the set of coins that has the anomalous coin, second, find if being face up results in the set being heavier or lighter, and third, narrow to a final measurement involving 1 coin up, 1 coin down, and 1 coin vertical (or off the scale).

If it does not equal

9, follow the same process, but do so in larger batches, namely in 3 for this example. The vertical coin is not necessary but set in the weighing to illustrate the weight would be the same.

Here's a way to find the fake with

5 uses of the scale.

Divide the coins into three equal groups, and weigh each of these groups. Whichever group weighs different must contain the fake. You will also now know what the value of $X$ is.

Next, use binary search on the four possible fakes. Weigh two of these four; if the weight is $2X$, the fake is in the other two, if not, it is one of the ones weighed. Either way, you are left with two potential fakes. Weigh one to see if it weighs $X$.

Also, it can't be done in

3 weighings. There are $2^3=8$ ways to weigh a coin with such a procedure (three weighings, on or off scale for each), but 12 coins total, so two coins must have been weighed the same way. If the fake is one of them, then they cannot be distinguished.

ANSWER WAS WRITTEN WHEN TYPE OF SCALE WAS NOT CLARIFIED AND AN EQUAL ARM SCALE WAS ASSUMED.

Here is an answer with

2b) ABCD vs IJKL which will tell you which group has the odd coin and which face is up (1 group will weigh light against both groups, heavy against both groups, or will be omitted the 2nd weighing and you will know if it was heavy or light
3b) AB vs CD Assume ABCD has the odd coin weighing light you now know it is AB with light side up
4b) A vs C if A is light this is your odd coin if it is not B is and you already know its orientation

It is possible only with 3 tests.