As the strange professor leads you to the next room, he says "And think, that was my most functional bot. Take a look at this one. Its right yellow number is jammed to 3 and its red dials don't work at all. If it lands on a red square, it just fails. The kicker being, it still works. There is still a way to get it from the start (upper left, pointing down) to the shutdown panel (in the bottom right) without hitting a wall (black). Can you find it?" 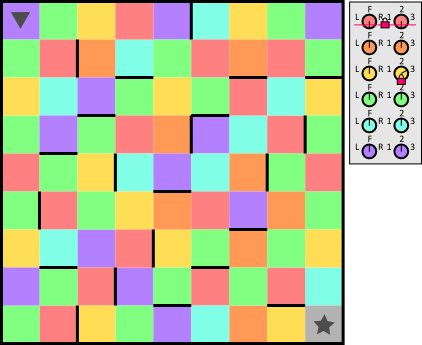 "To remind you, these dials set how he moves. He's got a camera on the bottom. When turned on, he checks the color of the space he's on and moves according to the dials of that color. First he either turns 90 degrees [L]eft, 90 degrees [R]ight, or keeps going [F]orwards, based on the left dial. Then he moves the number of spaces shown on the right dial; so one, two or three spaces. Once he moves, he checks the new space and starts again. The matching dials glitch is in this model too; if two sets of dials match exactly, he won't move at all.

The final path is 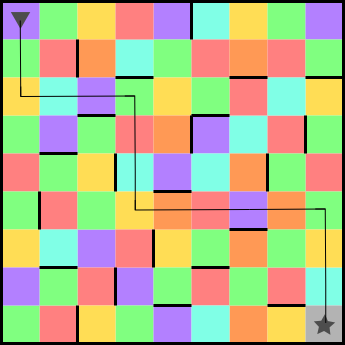