Help Black slide the blocks to solve this chess problem

Here's a chess problem which plays very like a sliding-block puzzle, hence the rather unusual tag combo. 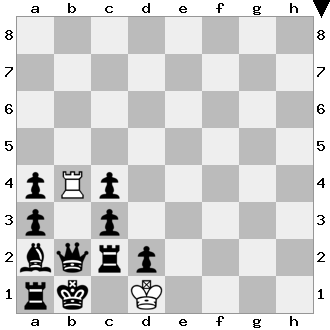 To explain that stipulation "sh#19": This problem is a serieshelpmate in 19. In a serieshelpmate, Black starts, and plays a series of moves, with no White moves in between. Then, at the end, White plays one move, which checkmates Black. Black is not allowed to move so that his king is in check. Black is not allowed to give check on any move except the last move of the series. In this problem, Black plays a series of 19 moves before White plays the final checkmating move.

You, the solver, stipulate all the moves -- that's the help bit. It's not like an orthodox problem where you must specify what White does against any defence from Black.

After looking at the other answers, I think I found something they missed:

By blocking on b1 with the bishop, a tempo is saved, compared to the lines where both pawns are promoted.

As @Sconibulus pointed out, It can be done in 20 moves as well.. (I had independently found this variation, 5 minutes ago)

Not the answer you're looking for? Browse other questions tagged chess board-games sliding-blocks or ask your own question.