A star made of dice

This puzzle is based on another one called Stella di dadi (dice star) from a popular Italian puzzle magazine. However there have been some modifications to make this puzzle a bit a lot harder. 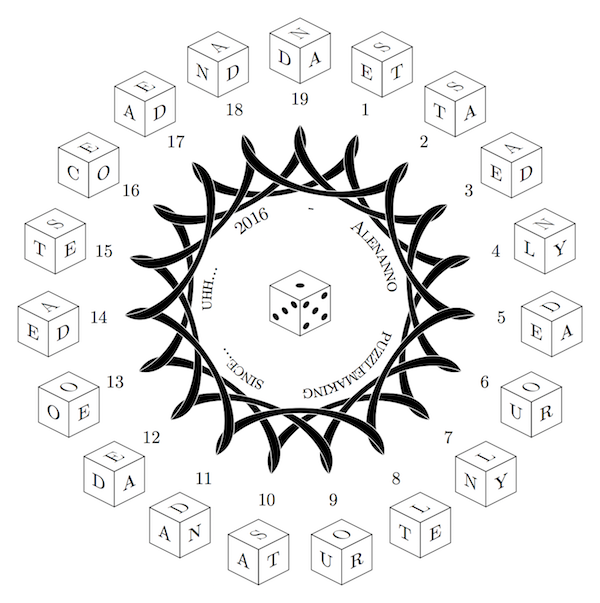 Reciprocal of cosine. — In an eager or enthusiastic manner. — Too emotionally dependent. — Remove a person from power. — Equipped for industrial production. — An ordained minister. — It cannot be used as a minus in programming. — Food reduced to shreds through rubbing. — Conferred as a distinction for achievement. — Just outside of the podium. — Lively dance of Czech origin. — Calm someone by administering a drug. — Food containing oxidized fatty acids. — Food made from gluten... approaching the sunrise. — Be easily removable. — Pillaged, stolen. — Lose one's temper. — Of leafy vegetables. — Inflamed with passion.

Dice letters in text form for the visually impaired, given in order:

Ancient Greek Chthonic God of the Underworld, the Dead, and the Riches.

For which the answer is:

I think the final answer is going to be

First of all, some answers to clues (some of which I'm happier with than others). Some of these were first found by other solvers and you can see them in comments and other answers. Some of them (even ones found elsewhere) I found independently, but feel free to assign credit for all of them to other people :-).

The things I'm least satisfied with there, apart from the outright unsolved ones, are

GRATED (seems like the clue should be referring to the food rather than its property), HONOUR (assumes British rather than American English; I don't know which Alenanno prefers), BREADS (the S is from "sunrise" and seems rather unsatisfactory), DETACH (surely there should be something better). Of these, I think I have good evidence for GRATED, HONOUR and DETACH but BREADS remains dubious.

ERUPTS has been mentioned as possible for "lose one's temper", but it seems wrong in something like the same way as GRATED. (I make another proposal for it below.)

So that leads to the following residuals for our dice:

which rather suggests that

for dice 3-10 we might want .../CHT/HON/IC G/OD O/F TH/E DE/... although if so we had better find something else for die 11 because neither EST nor ERT seems to go well after that; we surely want that last word to be DEAD or DEEP or something. (Aha, no, we can do better; see below.)

Another place worth a look is

die 13 which (unless one of the unsolved clues provides something helpful) seems to have to have a residual of TLD, and be both preceded and succeeded by quite consonant-heavy stuff. The best I can find at present is .../WOR/LD T/... but if so then I think we need something else for die 14. And, aha!, we can join these two blocks together to get CHTHONIC GOD OF THE UNDERWORLD which sounds awfully promising. That would mean that die 11 has a residual of DER so that word is an anagram of ADDENR; perhaps DANDER is the intended answer to the clue about losing one's temper, though I don't think it actually quite works if so. And, aha! again, it surely must be ANCIENT GREEK CHTHONIC GOD OF THE UNDERWORLD (hence my confidence that the final answer is HADES) which means I'm missing a word with an I in it for die 2. Perhaps our leafy-vegetable one is TISANE.

At this point we have just the last part of the final definition to figure out ... and I'm having real trouble finding anything that fits with anything else. I suspect BREADS is wrong; it might be DANISH (going on die 18 or 19) but while that's a more satisfactory answer to the clue it doesn't make it any easier to piece the residuals together.

Remove a person from power.

Calm someone by administering a drug.

Sorry -- no attempt here to match a word with a die, or to find out which letters are shown.

Here's my list, including some not yet mentioned alternatives:

The ones marked with ? are questionable at least.

12
The Dice Star Strikes Back