The security to the murdered president’s “what am I?” riddle party [Part TREE(3)]

François Hollande, famous Cordon Bleu chef that he (like all French presidents) is, has invited a select few guests to his party, where he will be showing off the secret cheese-making process that doubles as a plan of attack against Britain. Your task as a UK spy (who happens to also be an Argentinian agent) is to steal this recipe for disaster. Entrance to the château wherein lies the party, however, is overseen by two guards. One guard always lies, and the other always tells the truth.

You arrive early and hide in some bushes. Guests begin approaching the door, and it becomes clear that there is some kind of password involved.

You think you’ve figured out the pattern, though, and are about to take your turn when another guest arrives, late. The challenge is given – “26” – but before the guest can give an answer, a loud gunshot is heard. Someone shouts out the window that the president is dead! It’s a coup d’état! You must get to the plans before the assassin, but one guard is still performing his duty. You are given the number five as a challenge; what is your response?

If the number that the guard tells you is n, respond with the number of letters in the nth word of The French National Anthem (in French, of course).

Here is the first stanza:

All of the words match, and the incorrect answer (off by one) fits as well! 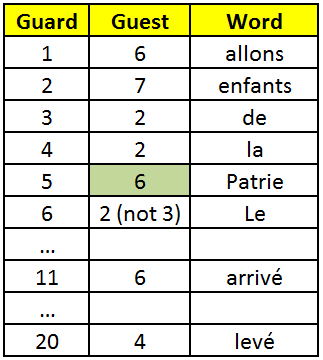 I'm guessing the answer is 0. All the answers are to have an implicit relation with number 5.

This means that what the guard told was a lie.