Pheno Menon and his coloured flags

Professor Pheno Menon has sent for me for helping with some decorations. When I reached his home, he explained:

"I am assuming there's some catch?", I said.

"Indeed, there is." he replied, "I want them to be so arranged that all the possible triangles formed with $3$ differently-coloured vertices are similar to each other. I've trying to properly place them for some hours, but can't quite make it work. I am beginning to think it's not even possible; in that case, I'd like a proof of that. I thought you might be able to help me."

But I am stumped as well. Maybe you can help?

Adapted from a problem by Morteza Saghafian in Iranian Geometry Olympiad 2016.

There is an error in user3445853's impossibility proof:

"either abc are all in the interior of ABC, all in the exterior (which is the same case as previous but reversed)" No, they could both be exterior to each other.

I offer: (DELETED: NOPE, close but not quite) Am I missing something? (EDIT: YES. Yes I was.) 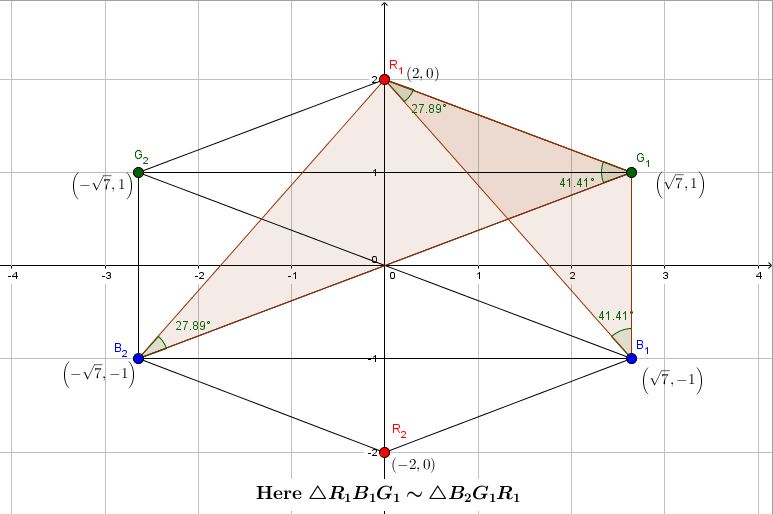 NOW am I missing something?

You can arrange them by forming 2 pyramids with the same square base.
The base will consist of the blue and green flags arranged in such a way that the diagonals have the same colors on the ends.
And the red flags would be the top of the pyramids 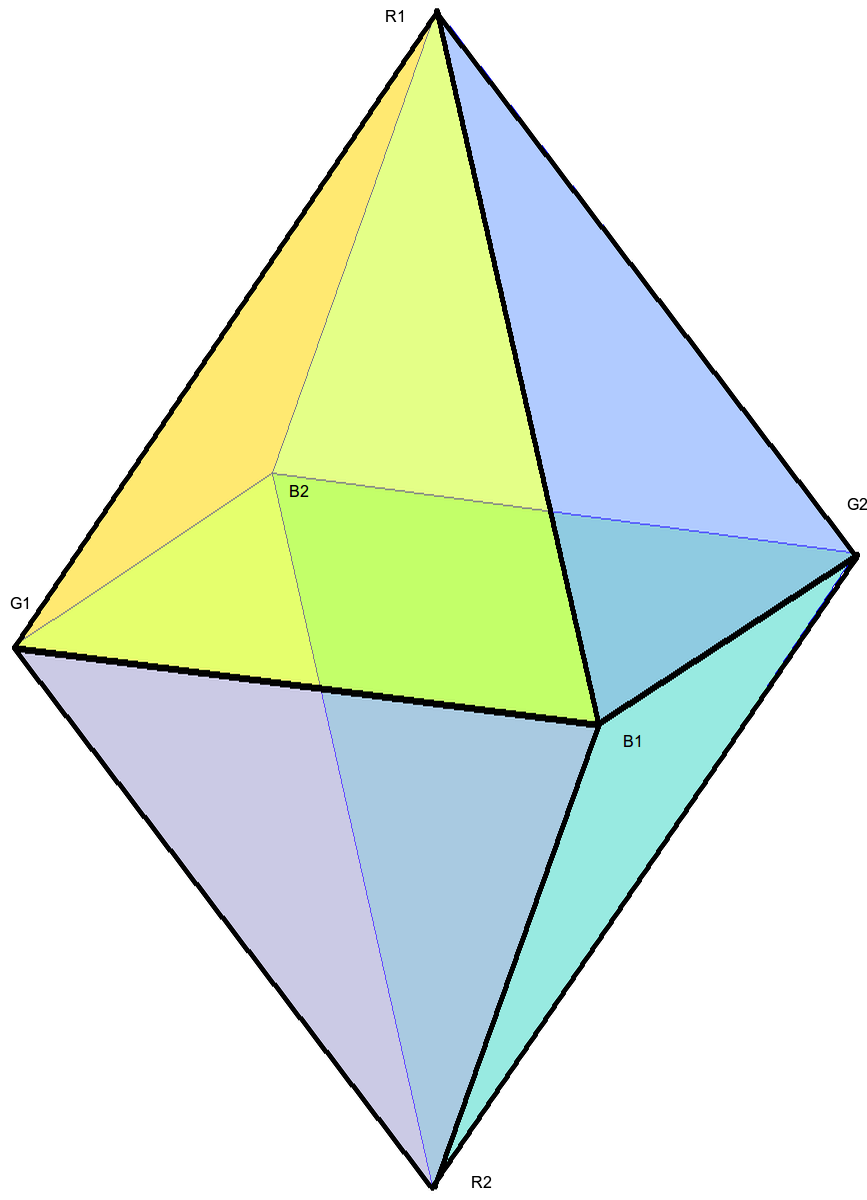 I don't think I understand the question right, because it seems trivial.

Lets mark one set of flags A,B,C the second set a,b,c with A and a one color, B and b the next color, C and c the remaining color (colors respectively red, green, blue, or whatever permutation). Arrange the first set A,B,C into an equilateral triangle. Mark the middle of each side, and put the remaining flag of the opposing corner color there: So the main big triangle A-B-C now has sides with middle points A-c-B, B-a-C, C-b-A.

That solves the situation because

This is provable by contradiction because

ONE or more original/first-set vertices are involved (otherwise it's the inner equilateral triangle abc you deal with), assume A (re-labeling makes it hold for the others, like I relabeled colors anyway to start); and ONE or more second-set vertices must be involved (otherwise it's the original equilateral triangle ABC you deal with), assume this is b (again, b by relabeling if necessary). Now the third vertex must be c or C; it cannot be C as that's collinear/ not a triangle, so we're left with Abc which is equilateral.

Or did you want to allow for "collinear triangles" (which are not triangles)? EDIT: Bof, if you allow for those (which by now, reading http://mathworld.wolfram.com/Triangle.html it satisfies that definition for a limit case where the angles tend to 0,0,180), then any collinear points (A,B,C) with B between A and C form a (degenerate) triangle with the angles at A and C being zero, at C it's 180 (or pi). But according to the definition I'm following here --- http://mathworld.wolfram.com/SimilarTriangles.html --- any three collinear points gives a similar triangle because it's the angles of the vertices NOT the length ratios of the sides. So ABC collinear whether a limit of ABC isosceles (so |AB|=|BC| in the limit) or not, that's all similar because the same angles. So arrange all six in any order on a single line, and Pheno Menon's question is answered by example. [Note that then they're also inversely similar as you can reach the limit from the mirrored triangle.]

If now somebody invokes some further overlooked rule why they would not be similar, and only collinear triplets at the same ratio |AB|:|BC| are similar, then clearly the arrangement with all six collinear is ruled out. Which means

there cannot be any collinear triplets, and no equilateral triangles either; then you start with a (non-degenerate) triangle ABC and see that either abc are all in the interior of ABC, all in the exterior (which is the same case as previous but reversed), or one in the interior two exterior, or the reverse. Here it's quick to see they cannot give you the same triplets of angles.

Here is a partial answer.

I don't think it is possible, and here is a partial proof:

Suppose I get rid of one of the red flags for now. The remaining five flags form four triangles, all involving the one red flag. These four triangles are supposed to be similar, and lets call the three angles of these similar triangles a, b, and c.
At the red flag, four angles come together and must add to 360 degrees. We know that a+b+c=180, so if at least one of each type of angle occurs at the red flag, the fourth angle would be 180 degrees, leading to a degenerate triangle.

If the same angle meets at the red flag 4 times, then it is a right angle. The four triangles then form either a rhombus or a particular type of kite shape. In either case the red flag is at the intersection of the diagonals, and there is no other point where the red flag could be. Therefore the second red flag can only be planted in the same spot as the first red flag.

If only two types of angle meet at the red flag, then we can assume it is either 2a+2b or 3a+b. In the first case we get a+b=180, again leading to a degenerate triangle.

The only remaining case that needs a proof is when three of the same type of angle meet at the red flag. This is the most complex of the cases so far and I don't have time to work it out now, but I will come back to it later.