What Land Grant Would You Select? [closed]

A king has just decided to divide up very large parcel of land and provide land grants to subjects that want to start a farming operation. This particular king and his advisors were into circular thinking and devised a rather unique way to create the land parcels.

The first parcel was to be a circular area with a radius of 1 km. The king would choose this parcel as the center of the kingdom and locate the castle and town there.

Around this another circle of 2 km radius would be laid out and divided into two equal parcels between the first circle and this new circle. Similarly the next circle would be 3 km in radius and its area divided into three equal parts. The figure below shows how these first circles would look on a map. 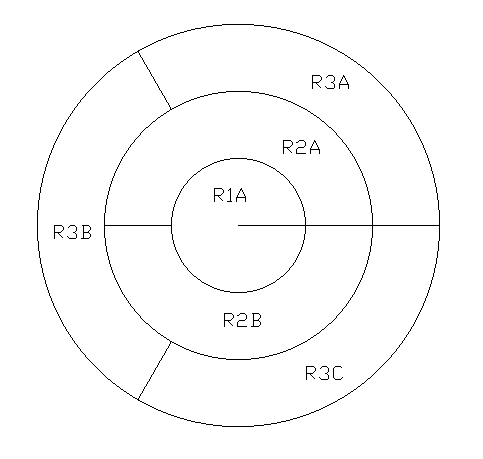 This layout would continue to ever larger and larger circles divided into a larger number of segments until all requests for parcels were satisfied or the outer perimeter reached the sea or mountains at the edge of the kingdom.

Since your livelihood would very definitely depend upon how large of farming parcel you got there was an incentive to carefully select which parcel targeted as yours.

The question here is what parcel would you select (i.e. how far from the center of the kingdom)?

The ring with outer radius $n$ kilometres has area

and therefore each of the parcels within this ring has area

an increasing function of $n$

if all the land is equally valuable you would prefer to be as far out as possible.

Of course in reality

it is likely that the land is not all equally valuable, for all kinds of reasons. And if the parcels are handed out piecemeal, taking a further-out one might mean getting it later (and assets are worth less when you get them later, hence interest). But all that stuff is presumably outside the scope of this puzzle.

Not the answer you're looking for? Browse other questions tagged geometry strategy or ask your own question.