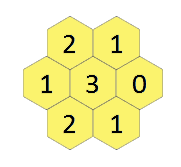 Above honeycomb structure contains numbers.
A number at each cell represent a statement.

x : This cell is surrounded by x True statements.

So if the number is 3 means the cell is surrounded by 3 True statement
Some statements are true and some are not.

there is only 1 solution. Find the solution !

They cant all be False, since 0 would then be True
It can't only be one that is True, since it would have to be the 0, but then the two neighbouring 1s would be True
It can't be exactly 2 that are True, since we'd need two neighbouring 1s
For exactly 3 to be True the middle would be impossible
For exactly 4 to be True the middle would have to be one of them
Now we can see that the three 1s and the 3 could all be True and satisfy the two 2s and the 0 all being False and we are done:

Proof of one solution.

Now assume the "2" in the bottom left corner is "T". Again, you can't do that with both a 1 and 3, so both 1s must be True and the 3 False. The 3 must be false but it's already touching three Trues, the 0 must be False (because the True 1 gets that from the 2), so the Upper Right 1 must be True... but it's not touching anything True so it must also be False.

Assume the leftmost "1" is False, both 2's are already False so the 3 must also be False. There are only three remaining cells, they can't all be False because of the 0, they can't all be True because that would make the 3 True, the 1's can't be True unless the Zero is True which is nonsense, so both 1's have to be False, which again means the Zero is touching nothing True but can't be True itself.

And now find the rest.

There are only two remaining cells so both 1's must be True because of the 3.

Not the answer you're looking for? Browse other questions tagged logical-deduction liars no-computers or ask your own question.