A Letter from the Past

It has been quite a while since your first assignment as a P.U.Z.Z.L.E. agent. Most of your tasks weren't even half that exciting and since your boss is currently on vacation, your most important task right now is to beat the ceiling dart high score.

Just as you prepare your final throw, your boss's boss - Mr. Smith - rushes through your door, looks around and finally walks towards you.

"You! ... This was delivered yesterday by a courier from a law office."

He hands you a letter. 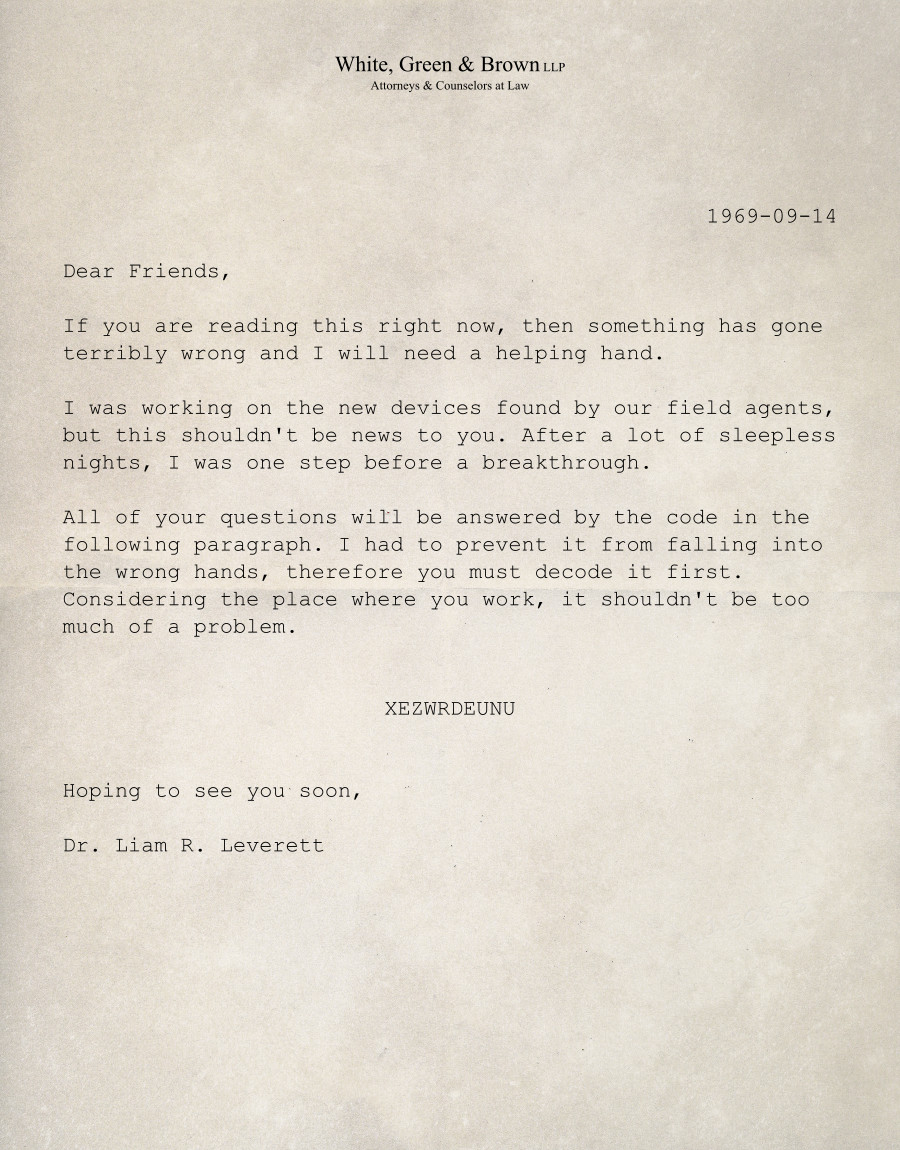 "Find out what this is all about. This has top priority, I need an explanation first thing tomorrow morning. ... Oh, I almost forgot. The envelope with the letter contained this as well."

He hands you a punched card. Well, it might have been state of the art when the letter was written, but what are you supposed to do with it now?

Mr. Smith rushes out of the room almost as fast as he came in, leaving you with a quizzical expression. Luckily you know Charles, probably the oldest man still working here. Maybe he can provide some insights. You find him in one of the labs.

"Ermm, yes, I remember Dr. Leverett. He was only a couple of weeks here before he disappeared without a trace. There was an investigation, but it came to nothing. Wait a second, we should still have one of those devices he was working on."

He walks away and comes back a couple of minutes later, carrying something looking like an oversized PDA. Its display must be one of the first ever produced LCD displays, and it has the most odd keyboard you have ever seen.

"Dr. Leverett attached the display and the keyboard, before he disappeared. We had two more of these devices, one of them heavily damaged, but they disappeared together with him. We only had little time to examine them before the project was cancelled. The only things we could discover were, that the devices had some unknown energy source and an odd clock signal. Examinations after Dr. Leveretts disappearance have shown, that the clock signal of this device was changed, possibly by Dr. Leverett himself."

Charles makes a short break and then continues:

"Well, I have to get back to work. Good luck with your investigation. I hope you can find out what happened to Dr. Leverett."

Using the device requires a 5 character long code consisting of lowercase letters, uppercase letters and digits. Add the code to the following URL to use it:

Images will contain a white on black transcript code. This is provided only for convenience, some puzzles aren't solvable with the transcript only. Add the code to the following URL to use it:

Part 1 (solved by Deusovi and Will)

- There are 3 possible values for "today".
- One of Deusovis comments below his answer contains the right key.

- Remember what you learned in part 1.
- Remember the history tag.

- The number of characters in the first line matches another number of items.
- How many unique digits does "today" have?
- This answer might be helpful.
- A friend has shown me his birth certificate, and his name looked very odd.

- The four yellow "buds" are not always zeros (or ones).

- The arrangement of the cipher at the top is a hint for the puzzle below (as already found out in chat).
- The decrypted message is a hint for the final solution.
- The cipher which is used here has the word "cipher" in its name, but is actually not really a cipher (see tags below).
- What characteristics of a ciphertext can be indicators of a particular cipher?

- If you think, that you don't have enough different dates yet, there is one unused hint in part 2.
- You need a basic understanding, of how the devices work (there is an important restriction).
- The previous sentence contains, apart from the obvious meaning, a second hint.
- Basic arithmetic is all math knowledge you need.
- It looks like you couldn't simply travel to any time you like using these devices. Something narrows down the possible travel targets.

Mr. Smith wants answers to the following questions:
- Why was it necessary to visit the years you visited, why were you involved at all?
- "Where" is Dr. Leverett?

There is also another still undiscovered Easter Egg.

Some day in the year 859, during the Viking expedition in the Mediterranean Sea.

We need this to:

Then, we should remember the punchcard we had to use in Part 1 and align it with the correct square to get the following grid: 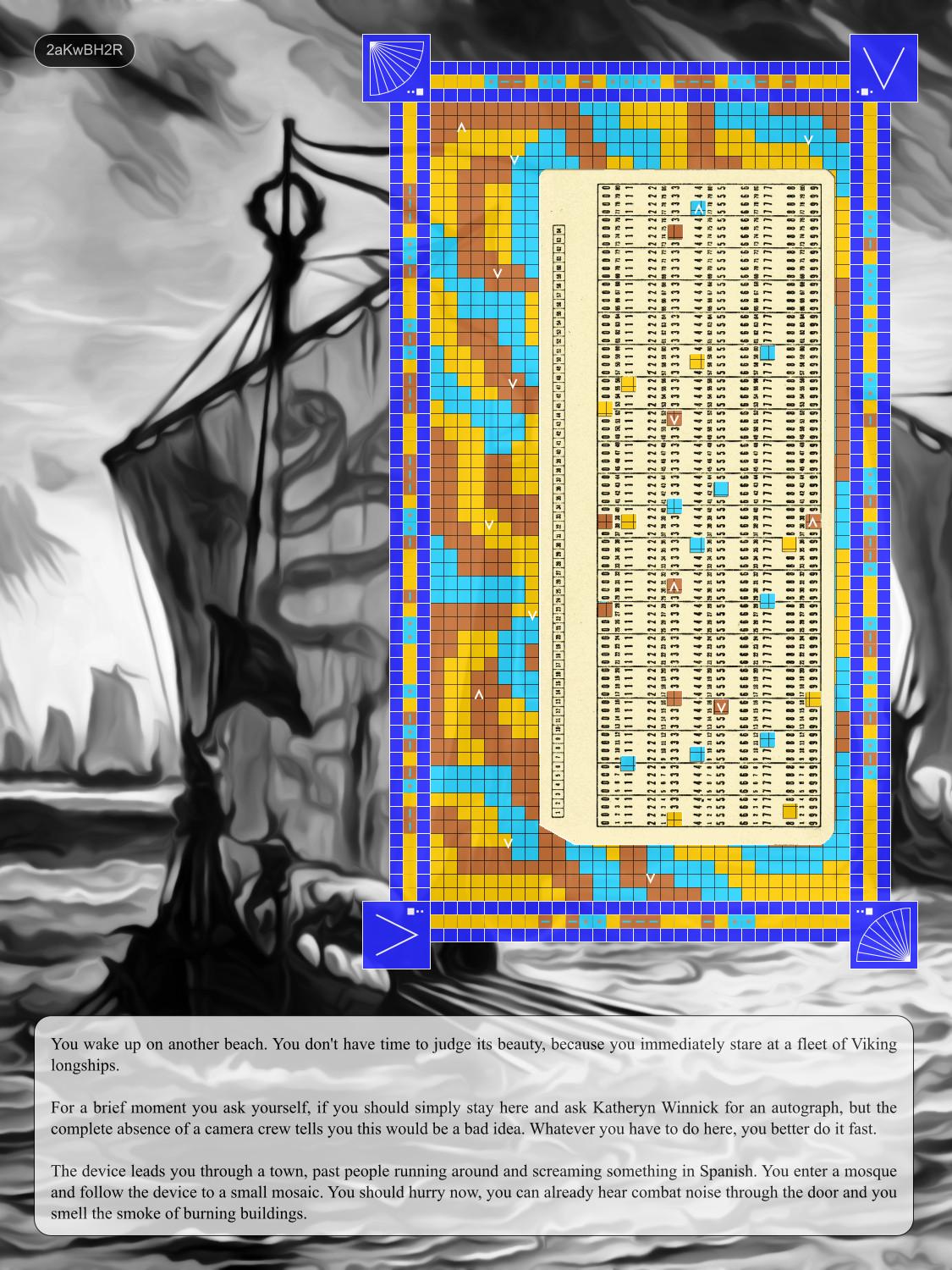 Noticing that in the borders, dashes have a brown background and dots have a light blue background, and spaces have a yellow background, we can translate the spaces in our punch card into Morse code: ".-. -..- -. --.- -...", giving "rxnyb".

For the final step, the punch card also reveals five of the arrows in the mosaic: ^v^^v. Taking ^ to mean uppercase and v to mean lowercase, we get the link to Part 6.

Had we done things in the wrong direction earlier...

And used the card upside down, we would still get valid Morse code and arrows. This time the Morse translates to "lcuov" and the arrows are ^^^v^, leading us to a black hole.

75 BCE, when Caesar was captured by pirates. They demanded 20 units (vigenti talenta) for him, when he said they should ask for at least fifty (quinquaginta).

Presumably, the first part of the tablet was meant to clue us to the following fact, which @Deusovi figured out:

We are dealing with magic squares here.

The obvious choice for the magic constant is 75. Solving the bottom square for the missing numbers:

Taking the numbers indicated by coins in the tablet, we have: 11, 15, 25, 20, 18. Converting this to letters, we get "lpzus". The symbols below the magic square in the tablet tell us how to convert them to upper/lowercase, and by doing the correct conversion we can finally go back home.

However, our puzzle is still not over, as we need to find an explanation for what happened before Mr. Smith comes back from his meeting.

The restriction of the devices

We also know that Dr. Leverett left from 1969, and Part 2 gives us evidence that he also went to 1827 (as the clue was on the Freedom's Journal, published in that year).

After a lot of mathematical fiddling (see the chat if you want details of how this was figured out), we can assert that in fact the two devices used are actually linked: the jump distance depends on the relative locations of both devices. More precisely, if our device is in year X, and Leverett's device is in year Y, then we jump approximately 2.30855 * (X-Y) years into the past. We can verify from Leverett's 1969 to 1827 jump that his device works the same way.

Given this information, we can reconstruct the path the Dr took alongside us, and find out that when we were in 75 BC, his device must have been in 766 BC.

Why was it necessary to visit the years we visited?

We have two hints to answer this question: the first is the previously-unsolved cipher in part 6. It's a Baconian cipher, and thanks to Alconja having the patience to decode it, we know that the plaintext is "I found her. I finally found her."

The second hint is the presence of a third device, other than the two we and Leverett are using, that is broken.

Given those two facts, we can postulate that an unidentified woman tried to use that device, but it broke, leaving her stuck in the past in the year 766 BC. Leverett did the calculations and knew that to reach that year from 1969, someone else had to help by using the other device, and that someone had to start from 2016. Therefore why we received the letter when we did.

Where is Dr. Leverett now?

Given what we know about how the devices function, we still did not explain how we got back to 2016. The only way we could jump forward in time is if the doctor were ahead of us in time, from which we can deduce that Leverett used his device for a second time after finding the woman he was looking for in 766 BC.

From the device formula, a jump from 766 BC with the other device at 75 BC places him somewhere in the year 831.

After we jumped back, the doctor possibly did not want to stay in the far past, and so took another jump to the year 3567.

We can reconstruct the whole craziness of this time travelling trip in this timeline of events (click to enlarge):

Using a Gronsfeld cipher on the ciphertext in the letter with the key 20160919 we get the string VEYQRUDLLU which we split into two halves VEYQR and UDLLU and interpret pairwise:

to give the string V4yqR, which we put in the image URL to get to part two

This image depicts the 1908 New York to Paris race which began on February 12, 1908 (remember this, it's important later!)

Interpreting this as A1Z26 gives us the string EJBMECCEBKCIAFDCENAL

Using Gronsfeld again, this time with the key 19080212 (it's today for us!) we get a string of all letters A through E: DABEEABCABCAADCADEAD

The words "tap and knock" in the advert hint at using a tap code after mapping the letters back to their A1Z26 numeric values and pairing them up:

From the image and the main body of text therein, we can deduce that we are now:

witnessing the first recorded European contact with Easter Island, and that therefore "today's" date is 5 April, 1722 (or 17220405 to format it like previous steps).

Now taking the enciphered parts of the image one at a time...

Next, looking at the block of enciphered text:

We see that there are eight groups, which neatly corresponds with our collection of 8 digits above. So aligning the text into eight columns, we get:
Now we sort the columns based on the order of 8 digits above to get: Or more clearly, "There is no shame in not knowing. The shame lies in not finding out.", which happens to be a Russian proverb.

Having nothing more that "Russian" and 0 p o T H to go on, we can observe that, in the Russian alphabet, the letter p is pronounced as a "rolled r" and H is pronounced as an English "N", leaving us with 0 r o T N, or more importantly for us, Part 4...

13 January 1404, based on the fact that the partial quotes appear to be referring to the creation of the Act Against Multipliers.

Now, onto the image:

Based on all the + symbols around the outside, and the variation in counts of petals/leaves in each grid square, I imagine this is a logic puzzle where each cell has to be filled with a digit such that each sub-row/sub-column adds to the number at it's left/top (OP pointed out that these are called Kakuro puzzles).

The puzzle is impossible if you treat the yellow buds as either zeroes or ones, however as @ffao discovered in chat, substituting the digits of the year into each bud instead, gives a single solution: 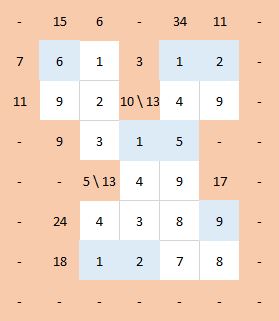 Overlaying the punch card on the letter gives "the begInning is always today". 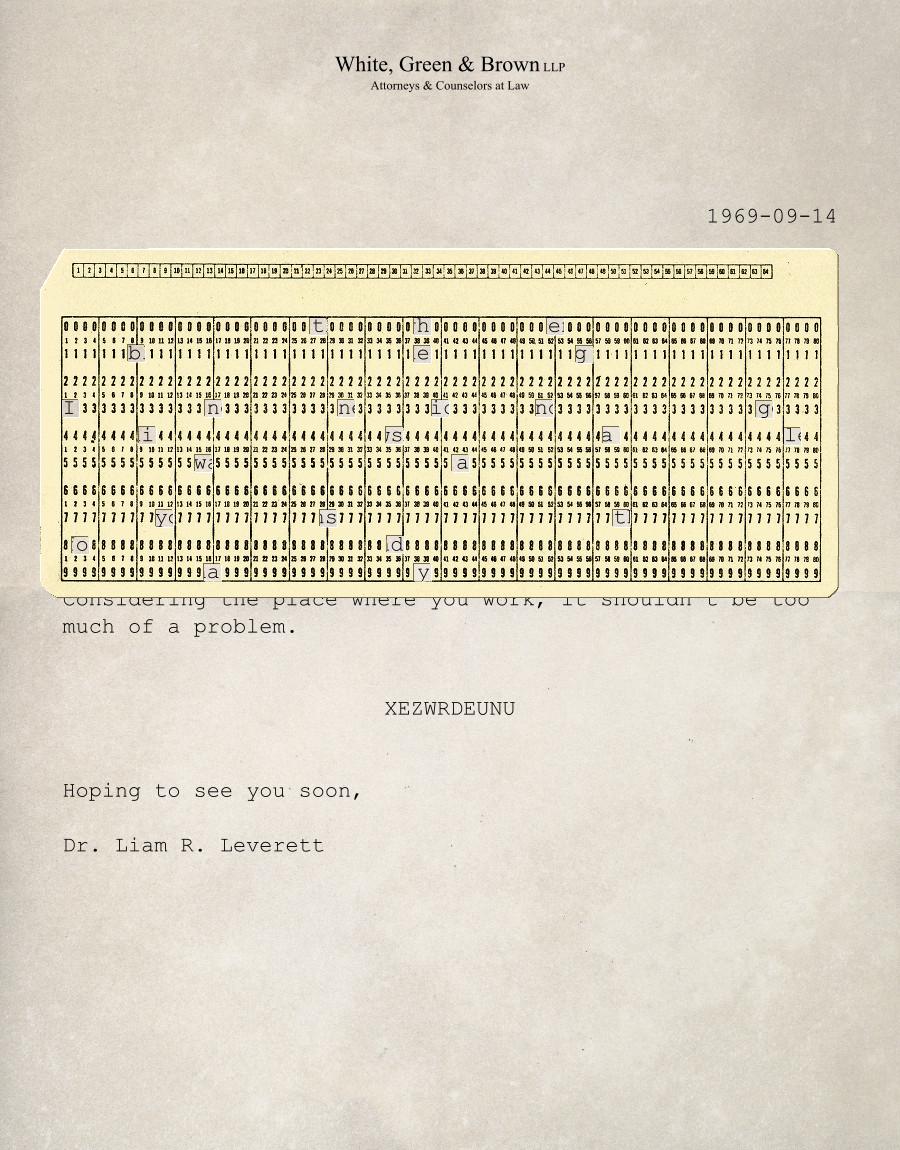 Not the answer you're looking for? Browse other questions tagged cipher story visual steganography history or ask your own question.

79
What characteristics of a ciphertext can be indicators of a particular cipher?
22
Prevent a Terror Attack
18
Vacation at P.U.Z.Z.L.E
7
Difficulty judging difficulty