Find your way to the control room

You are a space explorer, who accidentally finds an alien spaceship which seems to be deserted. You, and your team want to get to the control room, but you understand aliens and their technology only partially, so you have to experiment along the way.

When you entered through a hole in the ship's stern, there were no doors or passages. However, there was something eerily similar to what people call transportation pod, and its control panel looked roughly like the following diagram made by one of members of your team: 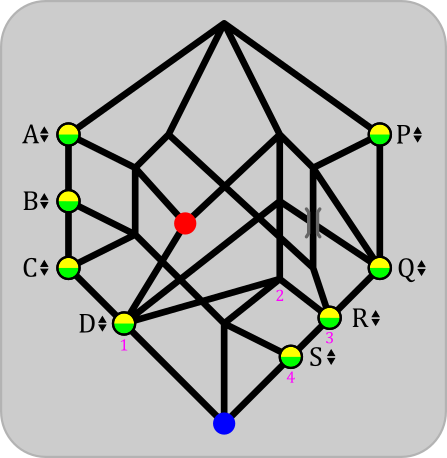 Of course, the aliens didn't use letters, that just convenience for us, humans. The blue dot denotes the ship's stern room and the red is the room marked with alien pictogram for control room. The yellow and green orbs are buttons.

You didn't know if it would work, but being an adventurous person, you dared to try. You pressed button Dâ–˛ and the pod, together with your team moved to room 1, with a small light on the panel acknowledging your new current position.

Well, maybe it does work? You press Râ–˛, but contrary to your expectations, you move to room 2, instead of 3. Now, that's strange, isn't it?

Perhaps, you should've press the Râ–Ľ button instead? You do, and indeed the pod moves to room 3. But then, to test your theory, you press Bâ–Ľ and end up in room 4.

What is going on? Can you find your way (a sequence of button presses) to the control room (you start in room 4)?

By mistake I've uploaded wrong version of the picture (I have to use several iterations to construct a puzzle). There is small "bridge" which significantly changes the problem (now a solution exists). Sorry for that $\ddot\frown$

My guess is that the control panel represents a

Lattice. The Buttons represent the supremum/infimum of your current location with the location of the button.

Example:
If you are standing in room 4 and press Câ–˛ it would take you to the supremum of room 4 and C which would be the next junction to the top and right of C.

This gives the following answer:

The control room can not be reached. To enter the control room you would have to enter from the top right (and press Aâ–Ľ). But none of those junctions are possible to reach because all the possible combinations to reach them have supremas below the junctions.

The control room can be reached from room 4 by pressing the following buttons: Râ–˛Câ–˛Pâ–ĽQâ–˛Dâ–˛Aâ–Ľ

Image of solution Câ–˛Râ–˛Pâ–ĽQâ–˛Dâ–˛Aâ–Ľ (because it is easier to draw): 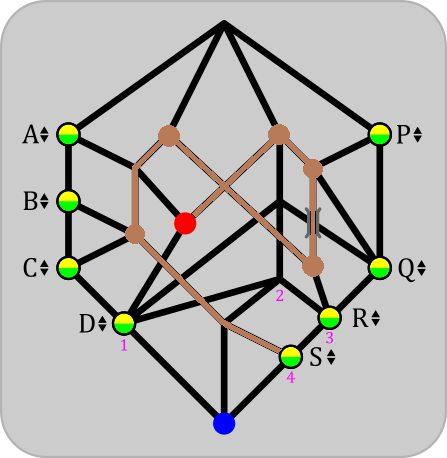 This is an answer to get the ball rolling. I'm not really expecting to be right, but maybe it helps someone :P

It appears that pressing up or down:

will move you as far as possible towards that button, in an up-ish or down-ish direction, until you either arrive in a named room, or the next directional move would leave you further from your target room than you are now (this explains why R â–˛ in room D stops at 2).

To get to the control room, I'd therefore push:

D â–˛ (arrive at the intersection of the middle-line from D and the B/S highway as that's the closest to D)
D â–˛ (nudges us over one further, onto the control room line. Going any further would take us further away from D)
P â–˛ (arrive in control room)

The right sequence might be (starting at blue dot)

Aâ–˛, which should leave the pod in room of button A Any button on the right (P,Q,R or S)â–Ľ should let us into the control room (red dot)

According to your directions, if you press a button â–˛, the pod tries to reach that button, but only going more upwards than downwards. If it cannot comply to the upwards rule, it stops. The â–Ľ buttons work by the same pattern (move closer to the button room but only downwards)

Being in room X and pressing the Yâ–Ľ button will take you to the point, which is reachable from both X and Y only moving downwards. Pressing Yâ–˛ means the point reachable from X and Y upwards. If you cannot reach the destination (Y), you go the path requiring fewer number of "steps". Reaching the control room could be therefore completed by (starting from the room 4):
Qâ–˛(Q)
Râ–˛(over the bridge)
Dâ–˛(3 verticals over room "2")
Aâ–Ľ(into the control room)

Not the answer you're looking for? Browse other questions tagged story mazes or ask your own question.

7
Lights in the Dungeon: Three by Three
6
Seeking Sidekicks
5
The evil Doctor Doozit with time
30
They've Noticed Your Puzzling Prowess
5
The keypad and the note
6
Reprogramming the ColorBot
6
Programming the ColorBot, part 3
21
Is humanity truly doomed?
5
Lost in time and space
0
Elementals and Aliens