I had read somewhere that the if we cut a cake four times (Two horizontal cuts and two vertical cuts, in whichever order), the maximum number of pieces we can get is 27. No solution was given there.

I am unable to figure out how it can be done.

Is it possible and how?

If all cuts are straight cuts and the cake is a rectangular prism or cylinder, it's not possible. From Wikipedia's page on the Cake Number:

In mathematics, the cake number, denoted by Cn, is the maximum number of regions into which a 3-dimensional cube can be partitioned by exactly n planes. The cake number is so-called because one may imagine each partition of the cube by a plane as a slice made by a knife through a cube-shaped cake.

There's even a sequence in OEIS that describes this series. 5 cuts can only get you 26 pieces so even that won't achieve the 27 claimed.

For reference, the optimal four cuts would look like this:

Here's one more interesting property of the sequence: It is sum of the first four terms in the $n^{th}$ row of Pascal's Triangle

Depending on what you mean by "horizontal" and "vertical", you can do much better than 27, even in 2D, even without folding and stacking. Make the cuts like this (the cake is grey, first cut black, second one red): 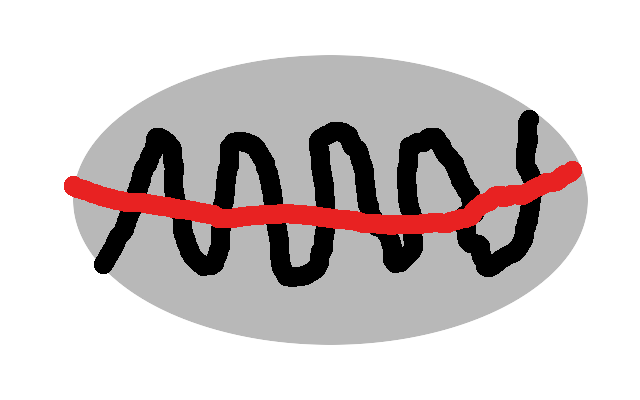 It is possible - imagine you have a very flexible cake. You fold it(x-axis) to half when first vertical cut, and fold it again(y-axis) when second cut. Then you will get a cake looks like the image below, which is 9 pieces.

For 3 straight cuts, we can get 8 pieces. After that, the fourth cut can at most dissect each of the 8 regions once... So at most 16, and I'm not even sure if that is possible.

I think another factor to consider is shape of the cake. An angel food cake is typically shaped like a doughnut (hole in the middle) in which case the answers are discussed here

I saw this question in The Second Scientific American Book of Mathematical Puzzles and Diversions On page 149 is a formula for the maximal number of pieces obtainable with n cuts, (n3+3n2+8n)/6. (It has the same picture, but with better quality and probably with expired copyright) – DenDenDo Nov 8 '14 at 16:57

The link is to here with the answer being shown on page 148.

Using the formula gives 24 pieces could be cut with 4 slices (although it only shows the cuts for 3 slices into 13 pieces. It also mentions if the pieces could be moved you could cut it into 18 pieces instead of 13 pieces but again doesn't show how and I haven't explored it. But >24 pieces is possible with a torus shaped cake with 4 cuts.

With one plane you divide space into two.

With a second plane you divide those two subspaces into four. The intersection of the two planes is a line.

With a third plane you can divide all four subspaces into eight. The intersection of the line and the third plane is a point.

So you have three planes, three lines (one for each pair of planes), and a point.

In fact, every plane intersects every other. This is optimal.

Now three planes cut the fourth into a triangle surrounded by unbounded regions of the fourth plane. All four planes are thus cut into triangles because every plane intersects every other.

Each triangle meets each other at a line segment, and each group of three meets at a point. This is a tetrahedron.

From each face extends a region bounded by the plane that includes that face, and the three other planes, and otherwise reaches to infinity.

From each line segment extends a region bounded by the two planes that include that line segment, and the two other planes, each of which cuts the first two. It otherwise reaches to infinity.

From each point extends a region bounded by the three planes that include that point, and otherwise reaches to infinity. The fourth plane opposes this point just like the base of a pyramid opposes the apex.

As far as I understand the question, it is not possible.

I vaguely remember reading a Wikipedia page that provides any exact formula for this problem, maybe you could Google it.

What if the cake was a 8" cube, then you made an 8" cylindrical cut thru one face, centered, of course- 5 pcs. now rotate 90 degrees and repeat. Now 15 pcs, 2 cuts. Then from top down 2 more cuts across the diagonals. the final answer is crumb cake and a totally harshed buzz. Heck of a good question, need more parameters

18
Cutting a cake into 8 pieces
12
Slicing a donut 3 ways - what's the most number of pieces?
2
Time for tea: cake division by lines

7
Maximum number of pieces of equal area you can obtain by cutting a pizza a certain number of times
2
Time for tea: cake division by lines
3
Cutting a cake into 7 pieces with 3 straight cuts - NO 3D
19
Ernie and the Cake Cutting
7
Obtain four equal parts with a single cut
19
Piece of Cake for King Solomon
8
Cutting a Slice of Cake Into Two
8
Making 7 congruent triangles from the pieces of a triangle dissection
1
Minimum cuts to make a rectangle into a square, allowing bending