What is a Veteran Word™?

If a word conforms to a certain rule, I call it a Veteran Word™.

Use the following examples below to find the rule: 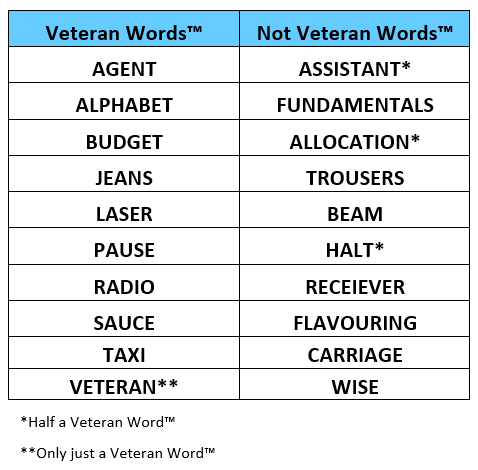 As suggested by the language tag, I think a Veteran Word™ may be

something to do with foreign languages: specifically, a word which is the same in English, French, and German.

All the words in the left-hand column, according to

my knowledge of French, supported by Google Translate for the rarer words and the German,

satisfy this criterion. VETERAN is "only just" a Veteran Word™ because

the French for "veteran" is "vétéran", which is only the same word if we ignore diacritics.

They're called Veteran Words™ because

Not the answer you're looking for? Browse other questions tagged pattern language history word-property or ask your own question.