Weird messages from a friend

I'm really worried about my friend Friedrich, until today I haven't heard anything from him for the last few weeks. I decided to message him and ask if anything is wrong, and he responded with some weird messages. Now I'm even more concerned! I screenshotted the messages for you to see (I also included a text-only version). 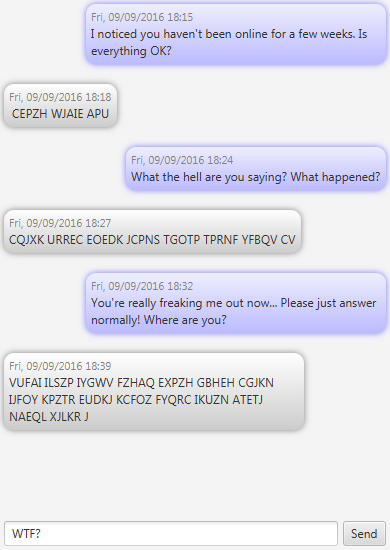 He just sent me a new message! It seems to be independent from the others, since he only responded when I sent something before. Maybe it's not even encrypted!

I just sent him a message on Sat, 10/09/2016 20:37, but he never responded back... Weird... Before he always responded to every message! And considering where he comes from, he shouldn't be asleep so early!

What does the fact that he is not named "Frederick" but "Friedrich" most likely say about him?

The spaces in the message of Update #1 may be more important seperators than you think.

What is he trying to say, what happened to him and where is he?

Piggybacking off of everyone else, the solution is to use

An Enigma Machine, where the timestamps on our messages determine the settings of the machine as follows:

As an example, our first message

In order, Friedrich's messages decode to:

the last of which are coordinates to Friedrich

With the help of Update #3, I've worked out the encryption method:

Friedrich's name is German, so we should be thinking of the Enigma machine. (Originally I'd assumed the OP simply used the sort of name he's used to - according to his profile, he lives in Austria. But apparently this Germanness of name was meant as a clue.)

Now I don't know much about this encryption method, and haven't been able to find much helpful material online either, but with the aid of this site I'm slowly beginning to unravel it.

The settings for the machine (not including the ciphertext) are supposed to look like this:

where (1) is a single-letter "umkehrwalze"/reflector wheel (B or C), (2) is a three-number "walzenlage"/wheel order (in this case, 241) to tell us the order of some wheels, (3) is a three-letter "ringstellung"/ring setting, (4) is a three-letter "grundstellung"/start position**, and (5) is a sequence of letter pairs called the "steckerbrett"/plugboard.

So, what's the relevant information from our Friedrich, other than the obvious ciphertext?

Which tells us how to get most of what we need for the key, from the message times in the form day, dd/mm/yyyy hh:mm. Note also the division of both this timestamp and the message in Update #1 into three groups of characters separated by spaces. This suggests the following meaning for the key.

I'm still not sure about either the meaning of I/MFree (although note that the division of these six letters into one and five is important, according to the OP) or

how to decide the steckerbrett,

but I'm definitely getting closer!

5
What was I supposed to get again?

6
Man’s Best Friend
93
Fwd: Re: Karen is missing!
20
Always log off from your Facebook account
15
Don't Be Afraid Of The Dark
5
What is your best friend Jake trying to tell you in his email?
12
Weird WhatsApp message
4
What a strange program
7
What's my favourite book?
9
Detention in 1997
29
The Oracle's IQ Test