In the following diagram, each red dot represents a positive number. The dot-numbers on each of the five circles spell out either a word (each dot corresponding to a letter) or a number (each dot corresponding to a single digit), always starting at the topmost dot and moving around the circle clockwise. Your task is to find these five words or numbers and put them together to get a solution. 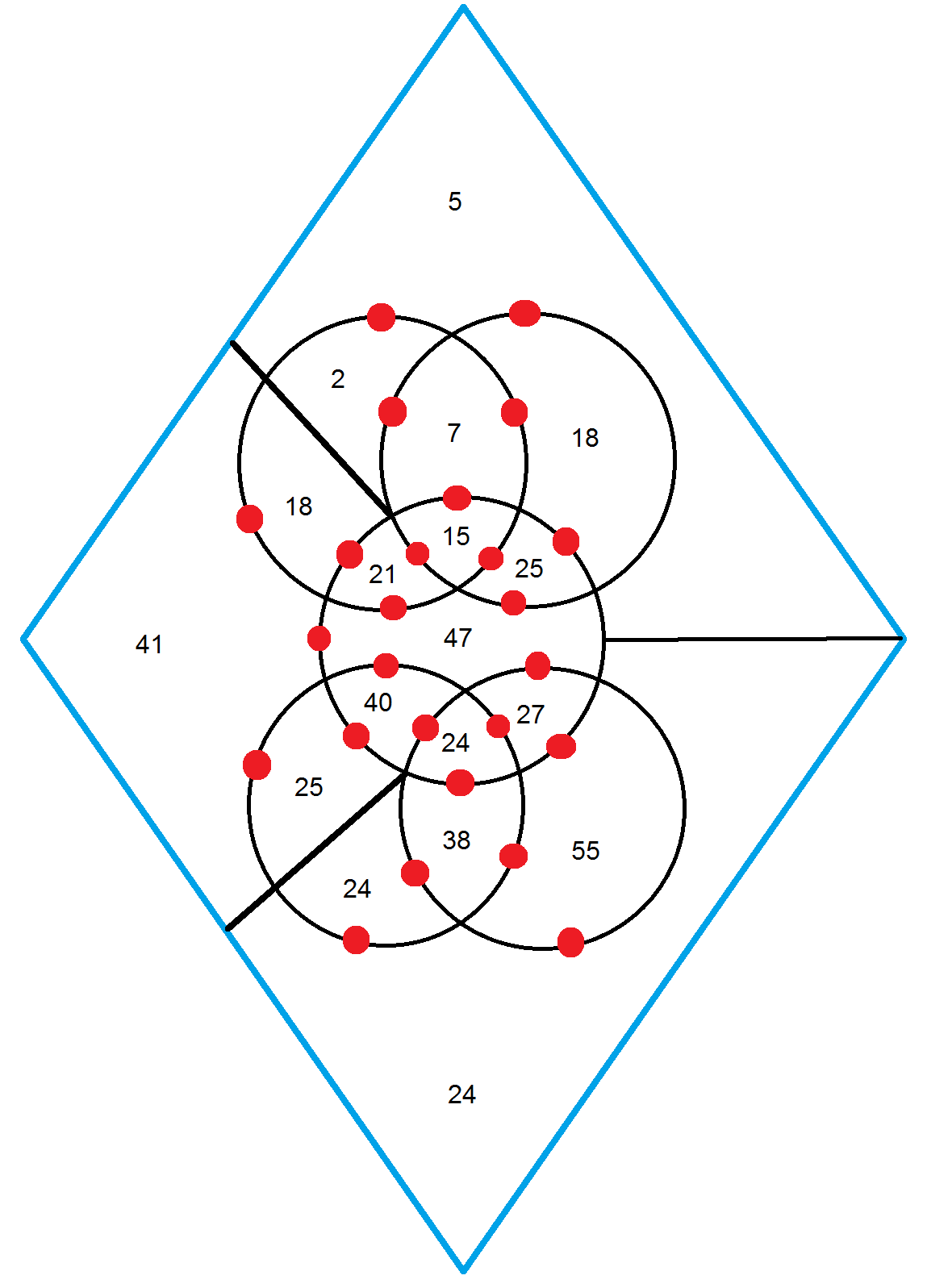 In order to solve the puzzle, you are provided with the following information.

Armed with this information, find the numbers and solve the puzzle!

Ah, just scooped by Gareth! I'll post anyway since I've got a picture: 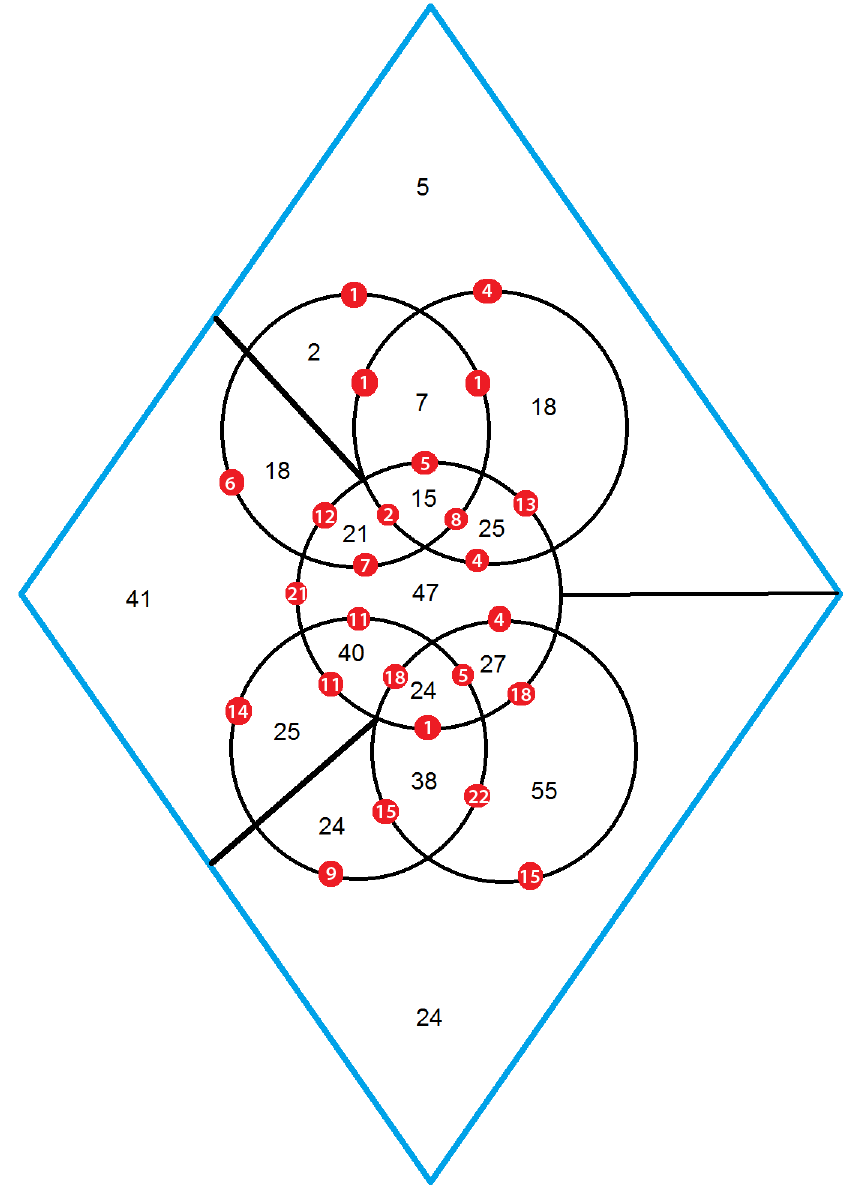 The place to start is

with the 6 bullet-pointed extra-info statements. For example, we're told that "In the region between the top two circles (the 7 and 15 regions combined): 12."
So if we look at this picture: 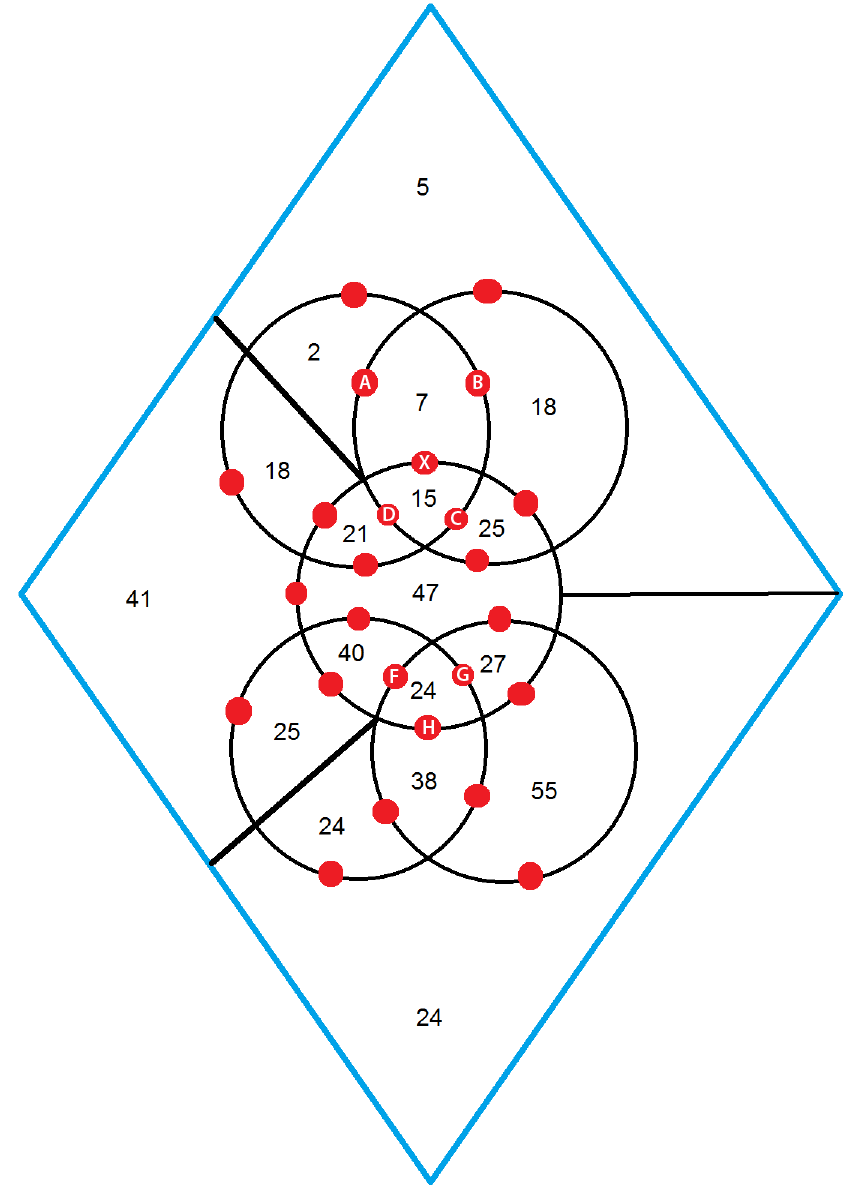 Then, looking at this picture 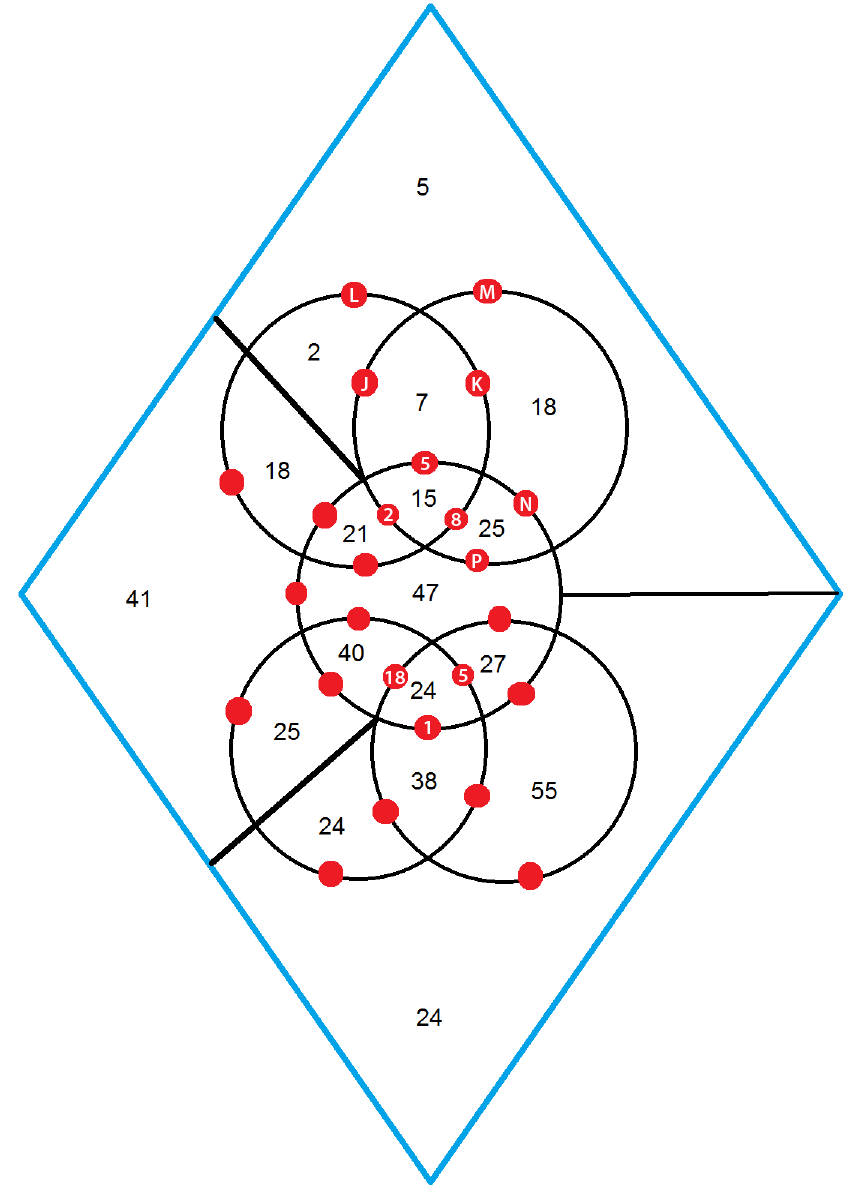 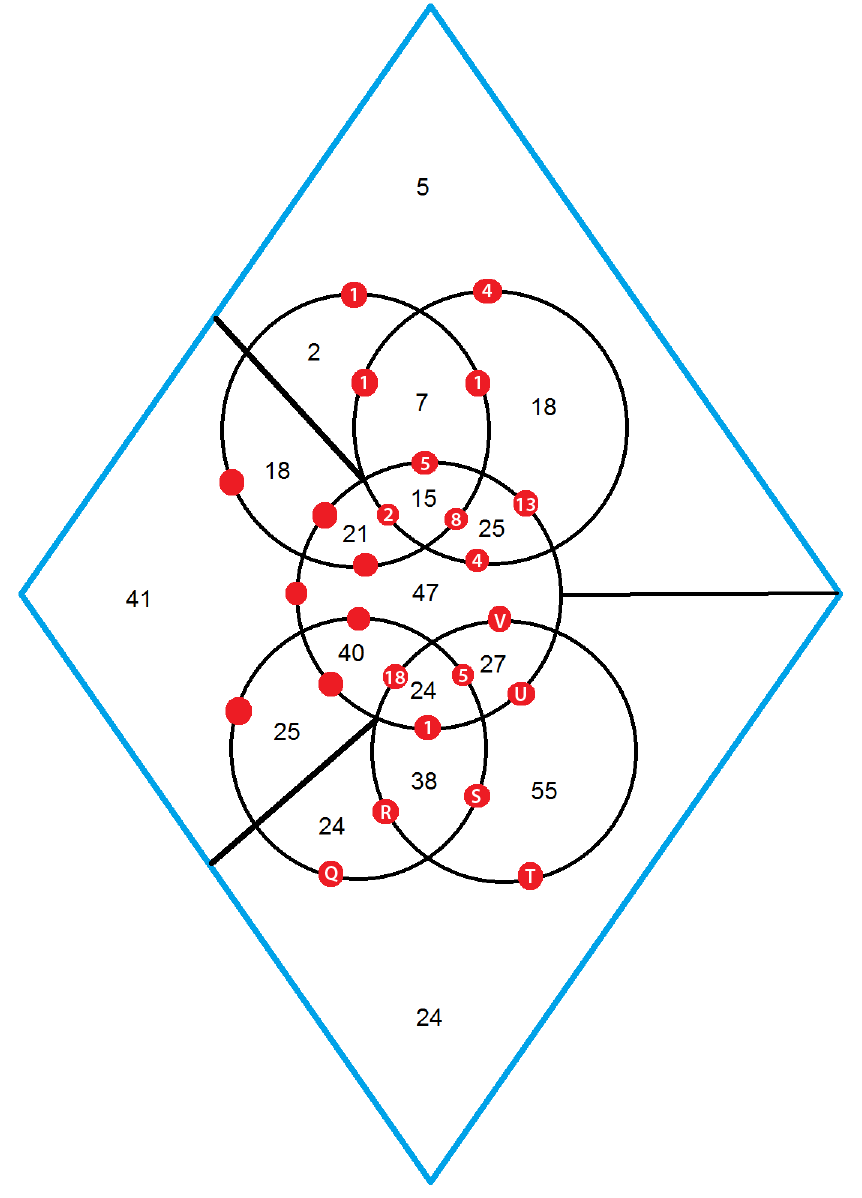 Then things get tricky, because it seems to me that this 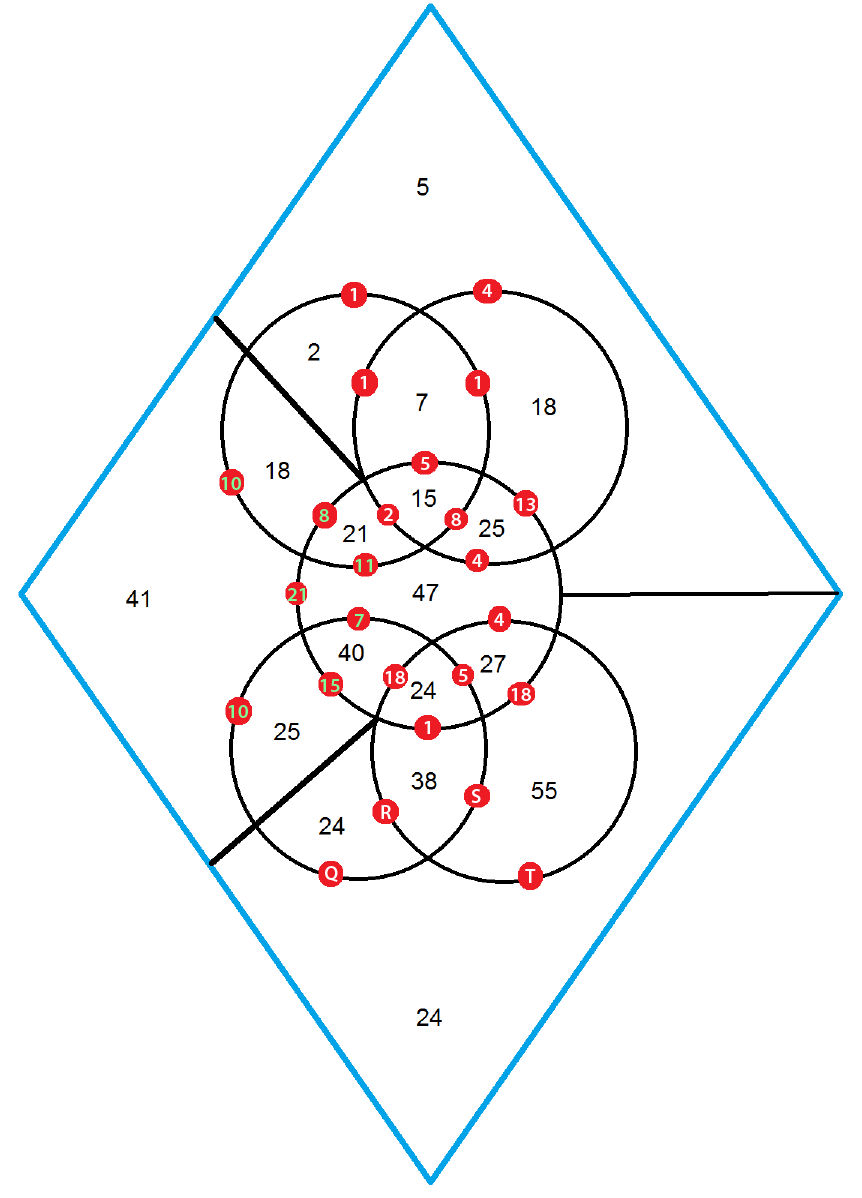 is a valid alternative solution to the seven dots (with greenish numbers here) on the left side. But solving it that way and converting the middle circle's numbers to letters gives "EMRAOUH", so that wasn't right. So at this point I filled in the center circle as Emrakul and refigured the numbers on the left to match.

the numbers 11876 and 4421. Which are the User IDs of our two newest elected moderators:
Deusovi
GentlePurpleRain

The bottom three circles, when

converting letters to words give Emrakul, Door(knob), and Kevin.
These were the three pro-temp moderators for Puzzling SE.

So in all, this moderate visual puzzle gives us

The names/ids of all 5 moderators thus far on Puzzling SE.

The given information isn't (unless I have erred, which is very possible) on its own enough to identify some of the entries at the bottom, so I am going on the basis of

I am not sure what the numbers signify. (There are some obvious guesses but they don't check out.)

Of course major hints here are

the diamond shape and the word "moderate" in the title.