Please help me decrypt this letter

This may be an off topic question. But there is no other place that I think I will get help on this. This is serious.

One of my relative's daughter (12th standard) is missing and it seems like she is having some connection with some banned groups (her lover is one of them). Her parents got this letter from her book recently. They share it to me. It seems like Greek letters. I tried typing all it in Greek font in Google Translate and tried to translate, but the result was gibberish.

So I think this is some kind of code. Please help me find the code and understand what the letter is about. This is very serous and it's the matter of a young girl's life. 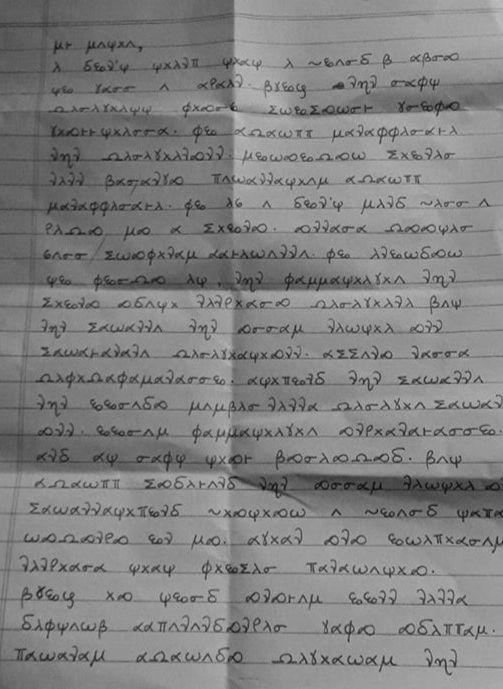 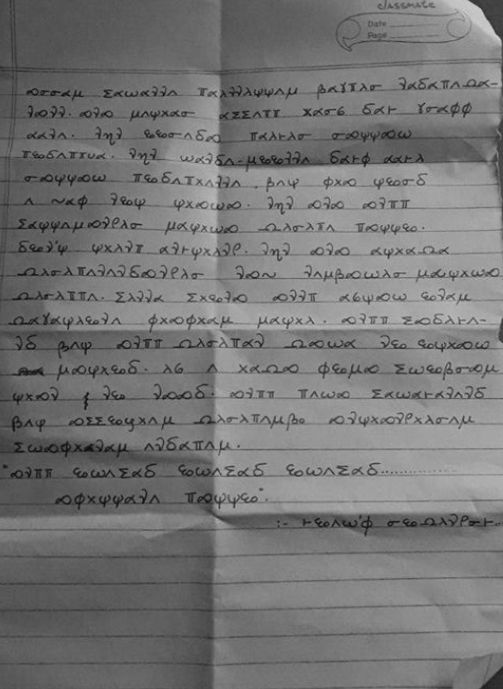 You can down vote if you think this is not the place. But please don't delete or close this question at least for a couple of days so that someone can help.

Moderators can close or delete this post as it got cracked already by M Oehm. Many thanks to him for his help.

This is only a partial solution, a first step. The letter is written ...

in English, at least part of it. It uses a monoalphabetic cipher where Greek letters and other symbols represent Latin letters. The letter uses abbreviations such as u = you and bcos = because. Punctuation is as usual in English and when we assume that the word with the apostrophe in the second line is either "can't" or "don't", we can guess that the first sentence reads:

I don't think that I would b able to call u again.

I've tried to keep the layout as in the original. Thanks to elias and noteness, who have contributed in the comments below, I now know that ...

the non-English words are Malayalam. This language has its own script, but in the letter it is transliterated into Latin. I'm obviously not familiar with Malayalam, so there may well bet transcription errors in the Malayalam words. Sorry about that.

For completeness's sake, the alphabet is

(The τ (Y) isn't really a τ, but more like a latin t. The ν (N) could also be a θ. The dot in n.n stands for ya and the word, which occurs often, is nyan/ñan, or I in English. Two letters are unresolved: the t with the stroke to the left in athko.d and the u-shape in kodukk.a.)

15
Crack the code and become happy
12
Please help with this geocaching puzzle
17
My friend is lost in time!
11
A love letter - or is it?
6
Please help me create a puzzle to ask a girl out
6
Can anyone decrypt this?