Two opposite onramps one city [closed]

Is it possible to have two freeway on-ramps,(one going north and one going south), and have them both go to the same city?

Sure. One on-ramp is somewhere north of the city and one is somewhere to the south. There's nothing in the question indicating that the on-ramps have to be in the same place.

Suppose if we want to goto City A from City B, then: 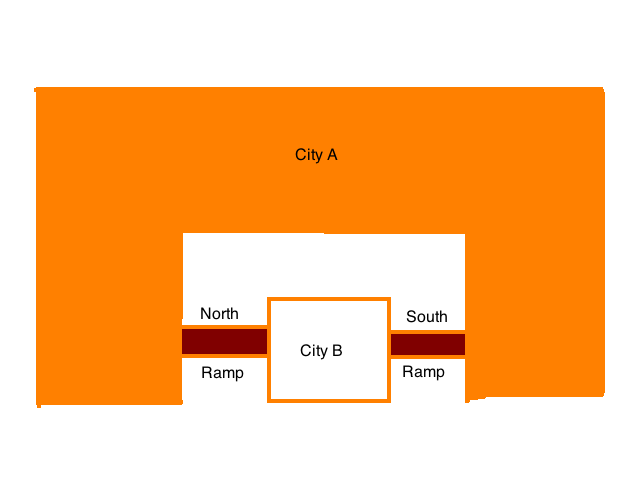 There are several such loops near Houston. For example, from Jersey Village, 8N and 8S both go to Houston. 610 is similar.

The city can be

There is Sirsi in Karnataka , Southern part of India .

There is Sirsi in Uttar Pradesh , Northern part of India.

So , if we move north and south we go to same city .

Not the answer you're looking for? Browse other questions tagged no-computers or ask your own question.

3
$109088$ as sum of $3$ palindromes
4
Digital Font Puzzle. One easy the other may be not
10
Missing checkmates in one
2
That Ain't Right... #4
6
Another simple jugfill problem
13
Gaby's Puzzle (Primes Around a Circle)
7
Stochastic Taxicab Path
7
What a coincidence or eighteen is not seventeen take two
7
A Five City Loop, starting and ending in MA