A solution to the Rectangle Puzzle of size n is an arrangement of n rectangles into a larger rectangle, such that no smaller rectangle is formed by outlining 2 or more of the placed pieces.

For example, here are solutions to the Rectangle Puzzle of sizes 2 and 5: 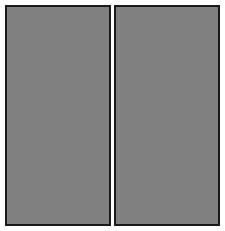 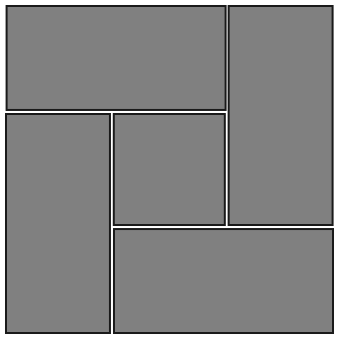 And here is an arrangement that fails to solve the puzzle for size 6, because the two tiles in the middle form a rectangle: 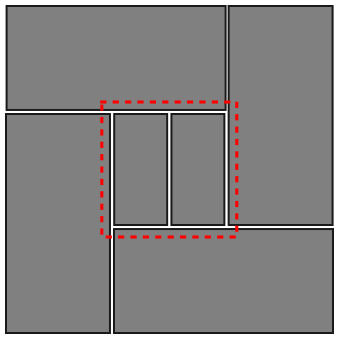 Here is a general solution for n>6.

The rectangles spiral around. To get the solution for a particular n, stop when you have placed the nth rectangle and truncate it so that the whole figure becomes a rectangle. Sadly this solution does not work for n=6, because then rectangles 2 and 6 together form a rectangle.

Here is a proof of why there is no solution for n=6.

1. A single rectangular piece cannot cover two of the corners of the completed figure.
If there were such a piece, then the remaining n-1 pieces would form a sub-rectangle of the figure.

Therefore the four corners of the final figure are from four different pieces.

3. Diagonally opposite corner pieces cannot touch.
If diagonally opposite corner pieces touched, then the remaining area of the whole figure would consist of two rectangular areas. If you fill such an area with two or more pieces, those pieces are a sub-rectangle of the figure, which is not allowed. If you fill it with a single piece, then that is a corner piece with exactly two neighbours, which is also not allowed as per #2 above.

Suppose on the other hand that all 6 pieces are on the boundary of the final figure, i.e. there are no internal pieces. So we have 4 corner pieces and 2 edge pieces. Suppose a corner piece lies between two edge pieces. It must have a third neighbour (#2), but the only candidate is the diagonally opposite corner, which violates #3. The only other arrangement for the edge pieces is on opposite sides of the final figure, say the left and right sides. The two top corners are adjacent, cannot touch either of the bottom corners, so the only way for them to have 3 neighbours is for both corners to be adjacent to both edge pieces. This is not possible.

All possibilities lead to failure, so n=6 is impossible.

Here are ones for

7 and 9 rectangles. 8 and 10 covered by comments. And a general solution greater then 6 by Jaap.

I (am pretty sure) I found the answer for n = 6. Please excuse the meager paint skills 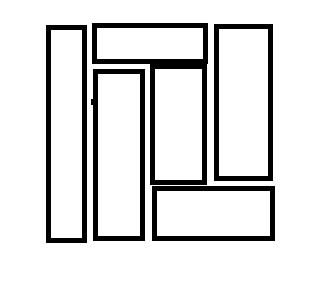 Please feel free to let me know of the rectangle in here if I'm missing it, or to update the picture to make it prettier.

Note: I misread the question. Leaving this here (for now) in case it helps others.

The answer is (probably not):

All rectangles of size N >= 5 are solvable.

This can('t) be accomplished by:

Starting with size 5 as drawn in the question, and adding a rectangle to the right that is the same length as the right side of it to make 6. Then add another rectangle across the top that is the size of the entire top to make 7. Repeat as needed. 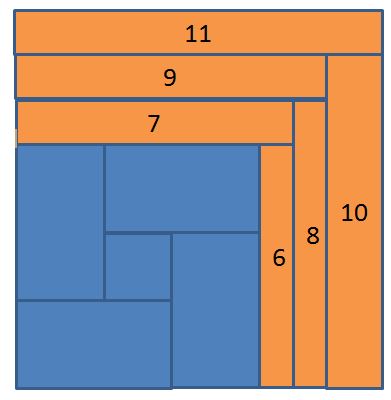 Not the answer you're looking for? Browse other questions tagged geometry tiling or ask your own question.