This is part of a series which I'll be continuing if this goes down well enough. If you have any feedback on the puzzle (too hard, too easy, not clear enough, etc) I'd appreciate it so that future puzzles can be better :-)

You wake up and log on to your computer. You log on to Puzzling.SE, browse some puzzles. You spend half an hour trying to think of number sequences because you're really desperate to go to a party, then after coming up with nothing, you get grumpy and decide to have a bit of fun - trolling people on StackOverflow with questions about the best way to become a lion tamer, for a career programmer.

You hop on over to StackOverflow, but as the page loads, something is clearly wrong. You can't click on anything, all of the questions in the list seem to be related to how to animate blood-effects in Javascript, and red pixels start coming down from the top of the screen. As they dribble down over more and more of the screen, some gaps are left in the middle of the screen which forms words, the "blood" drops flowing around them.

Terrified, you just sit there staring at the screen, until suddenly it redirects to a terrible, terrible thing and you snap into action, closing the window. You're not sure what exactly is going on, but in a rare moment of genius you realise that "SE" could refer to "Stack Exchange", and decide to see if any other sites on the SE network have been brutally murdered.

As you pull up the network sites page you see that yes, there are some other victims in this heinous crime. With no clues to go on, and nothing but a refined puzzling nose from weeks wast...err, spent on Puzzling.SE, you steel yourself and vow to bring the person or persons responsible for this to justice.

The only question is ... where do you start looking? 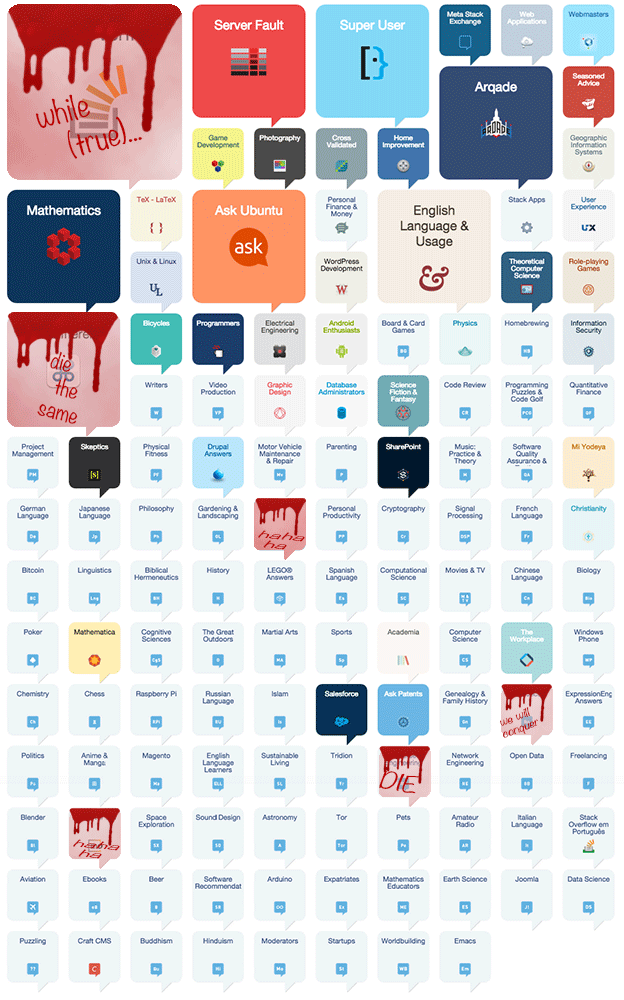 A hint for you, to narrow the search:

I didn't spend all that time making a fancy image for nothing you know! Graphics are hard (you can tell because of how cheesy it is :-P)

Moderators. The "killed" sites are StackOverflow, Ask Different, MathOverflow, Reverse Engineering, Robotics, and Travel. The capital letters of the names of the "killed sites" are SOADMORERT, which when you jumble, you get MODERATORS.

Yeah, it's been answered, but what the hell.

An important part of any murder mystery is the murder weapon. Finding that often gives you a solid lead. Based on the copious blood, and the fact that the icons remain intact, we can hypothesise that they were stabbed, so we're looking for something sharp. TeX-LaTeX has a pair of those nasty braces, SuperUser has a nose that tapers to a point and you could definitely do somebody a mischief if you flew Arqade into them.

Travel's icon is missing. And with three points, it's a murder weapon just waiting to happen. But it'd be difficult to use - it's evidentially not made to be held comfortably. Which leads us to Role Playing Games, who I posit took the feat Exotic Weapon Proficiency (Travel Icon) and took down some of his friends in a Pathfinder session gone horribly wrong.

Travel seems to be the oddball in the group, and as pointed out in a comment by Martin, it has no icon and name in the background, unlike the others. So I'd say go to the site Travel and find out what's up. I'd also put some sort of monitor on "Server Fault", "Super User", and "Programmers" and any other software type sites.

Graphic Design, because these blood graphics are too pretty. Graphics are really hard! Plus their name is red, like blood.

Maybe a little bit obvious but..

If I need to find where is the GOD, I could start searching in christianity

From the picture I think its clear that (well....ugh only after the hint though)

is the place to look because

Where do you start looking?

The web inspector of your navigator. Since it's a JavaScript, you will have access to the source code since it's download by the browser and that's the first place you should be looking for clues. Maybe it is probably an extern script and you'll maybe see the domain origin!

HSM (History Science and Math) has apparently been taken over or deleted altogether in an effort by the newly self-aware robots who "will conquer" to keep the necessary knowledge from us to do anything about it (as well as most of the 'programing' sites). I immediately search Robotics for clues to help me find the lost HSM.SE site and try to discover what they are attempting to hide from me.

You should probably put up a support request in stackapps so that more people will be aware and working on the problem, a wild wild guess

3) Web coders can never figure anything out on their own, there is probably a post that reads "how me hack a SE website?"

Look on your own computer, if nobody else has noticed, it's probably your local machine that's hacked, and not SE.

That's where you find out what's up.