The followed and the follower

At work a business man sat at a desk for 8 hours starting at 5 a.m. and of course when you sit for 8 hours looking through boring papers, you become tired. He stayed up through will power and lots of coffee. As work came to a close and his co-workers began to fill out of the building, he collected himself, gave a large sigh, and headed for the elevator. He walked out the building towards his company owned van and started the engine.

While on the road he got a call from one of his co-workers. He said "I'm on your side of town and I know we have that business deal to finish, would you mind if I come over?" In response the business man asked "Do you remember where my house is?" his co-worker said "I think so" To this a meeting place was arranged and they both met at a small snack bar with their cars. They then continued to the house.

The single business man was driving alone in a van and was being followed by another car that never got 200 yards away. He pulled into a very thin, fairly straight, one-lane road that had no intersections with the exception of two driveways. The road was ~3 miles long and had a slope of ~20* all the way up. Towards the end of this road there was one bend to the right, much like a tilted backwards 7. About 50 yards before the bend, on the left side of the road, looking up, was our first driveway. After the bend, the road continued for ~100 yards before on our right looking up the road was our second driveway. The road then stopped at a dead end.

The business man drove up the road he lived, constantly looking backwards every ~30 seconds. Each time he looked back no one was there. On either side of the road were large trees that blocked any nice view, for the setting took place in a forest. As the business man neared his destination he pulled off the road for 1 minute, during which he looked up and down the road to make sure no one was following him. He saw no one. He then continued into the first driveway and stopped to open the gate. When he re-entered his car he saw a car in his rear view mirror:

Can you explain the events and how he was followed?

This is a diagram of the road 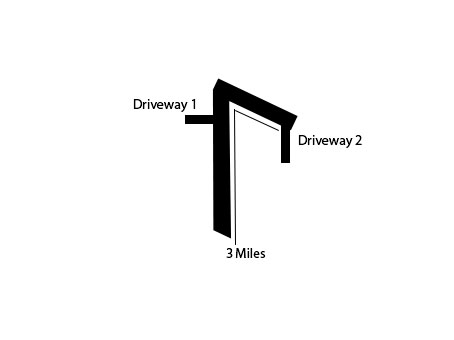 Correct so far: From @Benjamin Braun:

When he looks up and down the street the car has driven around the corner. When the business man turns into the first driveway, the following car comes back around the turn and follows him into the driveway.

The business man is delivering a car that he is towing behind him.

Answer, but see comments for possible problems with this answer.

is driving a large van with a large blind spot behind him. The following car rides the blind spot for the first section of the road.

Before the business man looks up and down the road,

The business man turns into the first driveway, the following car comes back around the turn and follows him into the driveway.

The 20* incline of the road, and the fact that the driveway "looks up" don't factor into this answer.

The business man was followed by

a car driven by someone named Noone (or possibly that the car is of that name or title) - or, that is, the "No-one" he sees. Each time the man glanced back, he saw the person or car following him - the riddle specifies he "sees" this "no-one", not that he doesn't see 'any car or person' or any of the other various ways to convey that meaning. The same phrase repeats because it is important that the sentence always says what he sees and who is following, not what he doesn't see and who isn't!

the car following was always more than 200 yards away - the phrase "never got 200 yards away" might refer to its being never farther away than, or never closer to than that 200 yards - as long as it never crossed that precise gap. It might have been further back during the three miles stretch of road (maximum of three miles behind when the man was at the turn), and the trees prevent seeing around the bend onto that stretch, and making up time during the wait (the man stopped after the bend, where he "looked up and down" but the bend itself wouldn't let him see the long stretch) and squeaking by with just barely over 200 yards at the destination driveway... Assuming the second driveway and elevation lets someone on that driveway see past the bend and onto the road (specifically, a spot ~50 yards [or less, depending on the length of the bend] before the bend visible in the rearview mirror), otherwise car wouldn't be visible at the last stretch without violating the rule by being too close.

Edit - since the new diagram changed my spatial assumptions

6
A fork in the road
16
The Pie-Maker's Son
15
Fred Dews and his Bored Views
8
A Day in the (Not So Peaceful) City
16
Twelve past eleven at the police station
8
Trapped and gassed!
6
Ernie and the Menacing Monopoles