The life of a Knight: Conway style

So I was thinking about Conway's game of life and the ridiculous kinds of patterns that can be made (Things that move across infinite space etc) and then I thought, hey could a chess knight do this as well?
A refresher on the rules:

The new definition of a "Neighbour" is whoever a knight could move to.

Knights can move in an L shape 2 squares in one way, one in the perpindicular. 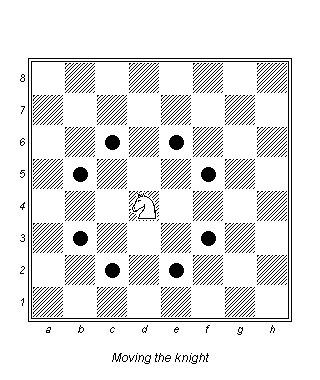 An example sequence repeating with period 5 is:

So here are the challenges I see springing forth from this line of thought:

To be honest somewhat expect the disproval more than anything else due to knights sharing no more than 2 neighbors and various parity type things that may arise, but I hope there do exist patterns.

So below is some base code for running the knight game of life in python. This is definitely not optimal (some kind of minesweeper like setup would probably be dope). But I hope this gives some interested people a good starting point.

Just to get the ball rolling with some of the stuff I have looked into so far:

The leading edge case:
In order to glide there must be a side that is expanding (here we consider the case of moving right, without loss of generality). For this to happen at some point 3 points have to be left of the initial point to produce it. This is possible from 2 different conditions. 2 knights 2 blocks left and then 1 up or down with 1 knight 2 up or down and 1 left. The alternative is 2 knights 2 up or down and 1 left and a single knight 2 left and 1 up or down.

8's indicate where the new knight will be.

I think I next am going to look more theoretical at how a white knight only attacking black squares affects potential interactions.

Not the answer you're looking for? Browse other questions tagged mathematics computer-puzzle checkerboard knight-moves cellular-automata or ask your own question.

6
Knight on a rectangular chessboard
191
Game of Life: Kill the Sun
59
Game of Life: Move the Sun
11
The L-Game of Life
31
Conway's Game of Knights
15
(Game of Life) It's so fragile... but how to reach it?
10
Conway's Siege of Life
6
What approach should I use to solve cellular automaton puzzles? (Find the previous state of a game of life grid)
19
Basic Numerical Boggle
14
Middle-Aged Life