There are 4 interns at the new government agency. All 4 are comp sci majors. John is the only male. The three girls are all close but secretly like John. Lisa is playing hard to get and hopes John will make a move but could trick John into asking her out. Anne likes John and flirts openly but repeatedly tells everyone she will not date a smoker. Sarah is the smartest out of the bunch and wants John to prove to her that he can fulfill her intellectual needs.

One day John arrives at his computer and there is a post-it note with a heart around it and the following numbers written in it.

Being that asking any of the girls will dissuade the other two from ever wanting to date him, John must guess who left the message and make a gesture to show he wants to date her.

Who left the message? What does John do?

The numbers correspond to the keyboard key below-and-to-the-right of it (eg. 5=T, 9=O) and spell out TRY TO QUIT.

Disclaimer: This is only posted in a half-serious manner because I was bored and looking for alternative decodings.

The message was sent by:

Sarah, but she's trying way too hard. The message is a two-fold trap designed to let John "prove to her that he can fulfill her intellectual needs." It's far more complicated than it needs to be but Sarah is too much of an intellectual to see that.

The first trap is the simple answer (given by Joe).

By using the adjacent numbers on a QWERTY keyboard, it spells out 'TRY TO QUIT'.

If Sarah sees him ask Anne out, she knows he fell for this trap.

The second is far more convoluted. First we take the numbers in overlapping pairs:

Translate that to Morse code:

If you translate that as a binary code, you end up with exactly three bytes:

Again taking the mod26 of those values and assigning letters:

Which is short for Lisa.

If he asks Lisa out, Sarah knows he's smart enough to decipher a ridiculously convoluted code. However, he fails the common sense test because only the brainy one (Sarah) would do something like that.

If he asks Sarah out, he's in for a world of hurt when she decides to keep sending messages like this in the future. He should do himself a favor and find someone else altogether.

I don't understand all the support for the shameless apophenia in the other answers. "TRY TO QUIT"? Weak sauce.

The correct solution is thus:

Indeed, it's the coy but non-judgmental Lisa flirting with John, by clearly indicating her name. ♥ 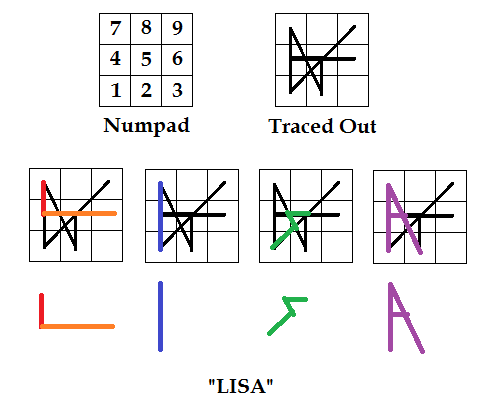 John should announce he

can't figure out the note because he uses the Dvorak keyboard layout. Sarah sent the note to test his mental acuity, but using Dvorak makes him enough of a mega-nerd that Sarah (and the other ladies) will openly fall for him.

Of course it means "try to quit" but more along the lines of a stalker's threat. (Seriously, is that really the best that Anne can do?) John needs to get out of there as quickly as possible...do not ask questions, do not look back, leave no forwarding address. In the words of the great philosopher: "You can check out any time you want but you can never leave."

3
A valentine's code
7
What word am I thinking?