Maximize the number of paths

You have exactly 990 edges. Assemble them into a simple undirected graph with two distinguished vertices A and B, such that the number of different simple paths from A to B is as large as you can make it.

Another example. We can do much better than that, though. For example consider this graph:

How many paths can you make, and how? I know that solutions with plenty more than $10^{100}$ paths exist, but have no particular reason to believe that what I'm thinking of is optimal.

Most paths win. Answers must state the number of paths in ordinary scientific notation, and must explain clearly how the paths were counted (in addition to explaining how to construct the graph they're counted in, of course). It is acceptable to compute a lower bound instead of an exact count.

(Inspired by this math.SE question, but I don't think anyone will be able to prove a maximum, so it's more a puzzle than an exact question.)

If I'm not mistaken the following grid must give the optimal result:

Let's calculate number of paths. I number 2-vertice layers from 0 to 197. CD is 0th, GH is 197th. There are 3 different possibilities at each transition between two layers:

A rule here is that you can make vertical line only at the beginning of the transition. I call type 1 and type 2 open and type 3 - closed. After open transition you can have any other transition, but after closed you can have only type 1. Let's call number of paths, which lead to open layer $i$: $a_i$ and n of paths, which lead to closed layer $i$: $b_i$.
$a_0 = 2$, $b_0 = 0$ (see the vertical-line-rule above).

Finally, to reach B-point after last layer we can use 2 ways if we ended with open pattern and 1 way with closed. So the total number of paths are:

To be sure I haven't made mistakes, I have compared my calculations for 20 vertices and 45 edges graph with recursive program. They do agree.

The "inductive prove" (guess based) that most probably you can't do better you can find below.

@Falk Hüffner, gave the improved number $6.76 \cdot 10^{130}$ and the fact that you need to use 15 edges per "link" in the "chain", but there is still no prove and no example of the "link", which allows you to achieve this number. So let me do it here and give some extrapolations, which allows to imagine a probable optimal solution.

First, my chain of thoughts:
I got noted that @Henning Makholm (3 edges -> 2 paths), @Roland (5 edges -> 4 paths) and @f'' (9 edges -> 15 paths) can be reached easily from the complete graphs (for 3,4 and 5 vertices correspondingly) by rejecting the most useless edges. In case of 3 vertices there are no edges to reject. In case of 4 and 5 vertices you need to reject the one who connects A to B directly (and adds only 1 path). 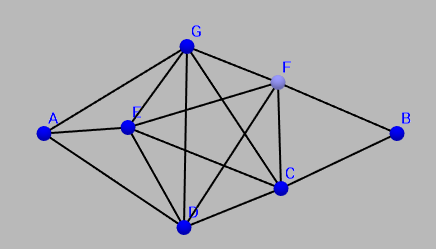 And the result here is exactly the same as with 7 vertices: 15 edges and 96 paths.

So I suppose to improve this you need to consider 9 vertices and reject all paths via 0,1 and 2 vertices (I still need to figure out how to build and count this, may be it is even to reject all paths, which go through 2 vertices only).
Now, it looks like you need to add 2 vertices and reject 1-vertice longer path each time. Finally, we can guess here that the most optimal result will be a complete graph on X vertices with all paths via 0,1,2,...,(X-5)/2 vertices excluded. So if you stretch it between A and B you should see a chain with width of ~2 vertices.

This configuration follows the general sense rule, which I mentioned above: you need to take complete graph and rid of most useless links (those, which contribute to the shortest paths).
Unfortunately it was hard for me to consider all possibilities on paper, but my program confirmed that there are exactly 240 paths.

The four paths through a segment are:

This is not a complete answer, since I don't state the actual construction nor give a proof for the number of paths, but I thought I'd share it anyway.

I've tried to find the maximum for small $m$, using a brute-force computer program based on https://github.com/falk-hueffner/tinygraph.

The optima, starting at 𝑚=0, are

(interestingly, not in OEIS). Thus, the values 4 paths for 5 edges and 15 paths for 9 edges given by Roland and f'' are optimal.

The number of vertices of the optimal graphs (also in the above table) are close to the minimum possible for 𝑚 edges, indicating that this kind of long sparse construction will not yield something close to the optimum.

The best I have come up with is this "lattice girder" graph (here shown with one possible path highlighted in red):

(Edited with more efficient ends of the girder, inspired by klm123's solution).

6
Every tournament has a dominant player
6
How to maximize your wages?
3
Evaluate the long multiplication
5
Magic-preserving Permutations on a 4x4 Magic Square
5
Identify this type of graph puzzle
20
Four mathematicians and their ages
8
Frog game on a dandelion graph
4
8x8 Grid with no parallels
3
Directed Graphs from numbers