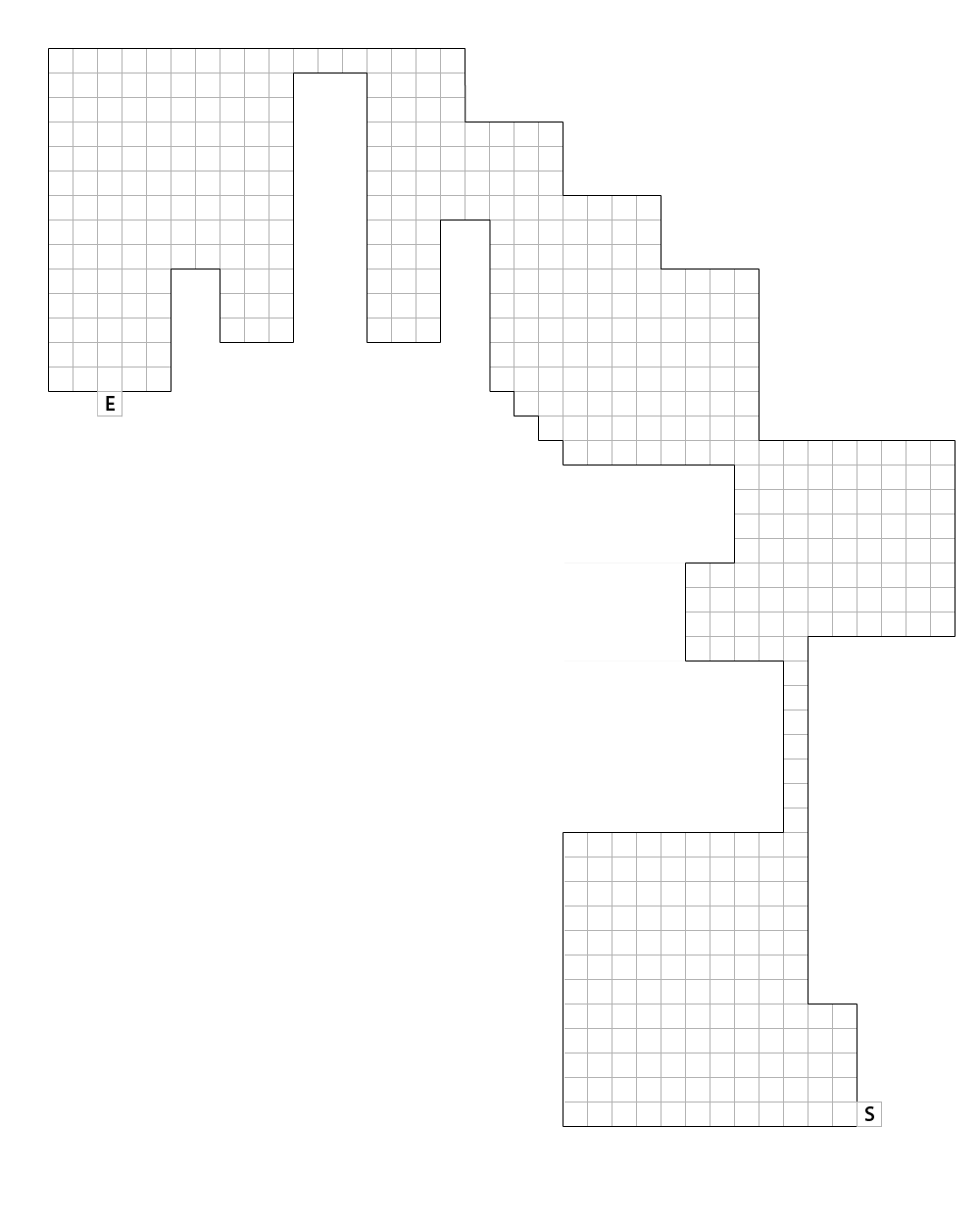 This is my first time writing my own cryptic clues, so hopefully they (mostly) meet standards, but you may need to interpret them a bit liberally.

What song was in my head while I was creating this puzzle?

This solution build on the work coordinated by Deusovi and the restrictions outlined by Bulldog6404. I haven't put the more general comments below in spoiler tags, because that woulx be a lot of spoilers. Most of it is obvious anyway.

A good strategy might be to start in the bottom right corner, where there is only one room to cross from any of the possible endings (SCARS, FORENSICS, SONOROUS) to the long bottleneck.

That means any of AMENDMENT, CARBONARA, ENTOURAGE, FORENSICS and RENOVATED are out. DRACONIAN might fit when it crosses LACED and LOGAN/BACON. The next level might work as well, because there are words ending in A and E and other words beginning with B, L, G, A, C for the next cross.

Of the ten-letter words, BASKETBALL is out, because whether it sticks on one or two L's at the end, it must cross with a word that ends in L, of which there aren't any more. Likewise, there aren't any words ending with C or I, so it can't be WORKAHOLIC either.

LAXSECURITY is possible, but it can have three possible positions. The position where L—ITY stick out is out, because that would require a short word ending with L. Sticking out LA—TY works, because the top can cross with LOGAN or LACED (WORKAHOLIC and BASKETBALL have their L's badly placed) and the bottom could cross with GRAY or AMENDMENT. Sticking out LAX—Y reduces the options at the tail to GRAY, but opens up many possible crossers with A's at the top in addition to LOGAN and LACED.

So the possible words for the long bottleneck are DRACONIAN and LAXSECURITY, the latter in two possible positions. We can combine them with all three possible end words and try to fill the bottom room.

Frankly, that's not a fun prospect. So I've written a small C program (link to pastebin) that tries to find a possible path through the maze by brute force. It comes up with the following solution: 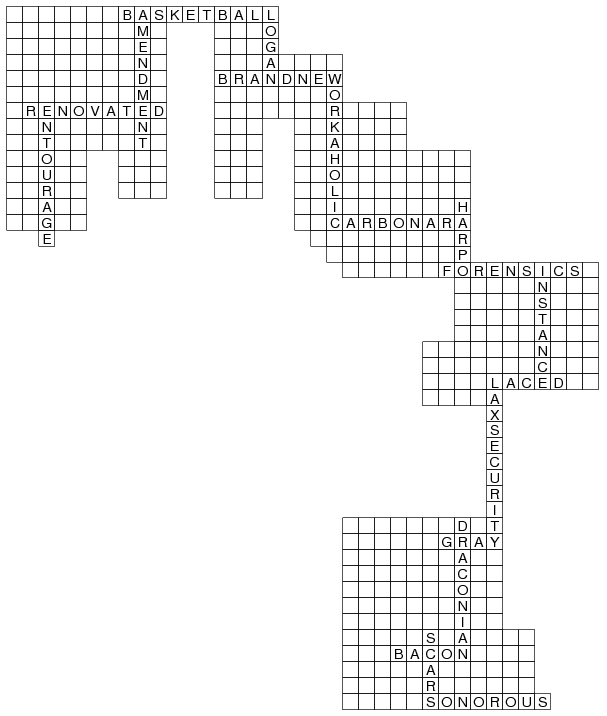 This question cannot be solved without doing the maze portion first, as revealed by the puzzle author. This means that the finished maze provides the method of answering this question. The most practical way I could think of was to take all the intersecting letters and unscramble them. As it turns out, it does present a solution:
E E A L N W C A O I E L Y R N C S
I C A N S E E C L E A R L Y N O W
I CAN SEE CLEARLY NOW by Johnny Nash

The Cryptic Clue Maze is a novel idea for a puzzle and I like it. I think, however, that the second stage where the path is built should be a bit more accessible, perhaps by having smaller rooms and more narrow passages. It should be possible to find the path just by reasoning and just occasional probing.

Another drawback is that all cryptic clues must be solved before you can begin to construct the path. Maybe a tighter maze design and some restrictions on the words could help to make the maze more crosswordy, so that possible intersections help to guess yet unsolved words.

All that is easy for me to say, of course. This puzzle is part of a Fortnightly challenge, where new puzzle avenues should be explored. The Cryptic Clue Maze does this and it is a good idea for a puzzle. At the moment, though, solving the cryptic clues is more fun than constructing the path.

The clue answers I've figured out so far:

LAX SECURITY (thanks, Will!)

Anger about queer, out celebrity friends (9)

Heir to Spanish gold: we are rich (8)

Confusing car and ion can be severe (9)

Raise in risk is key to every sport (10)

An airport in a blog announcement (5)

Occasion to hear a few heartbeats (8)

At table number 6, Stark has no question about sauce (9)

This answer is incomplete. I wasn't much able to contribute to the cryptic clues, but I'll try to help work out the maze portion. We have the following words confirmed as answers, organized by letter count then alphabetically:

I ported the grid to my favorite image editing software and painted the critical cells, the squares that are required to have letters in them by logic:

These colored cells must have letters in them. Some are choke point intersections, where a word must pass through in order to go from the starting point to the end point. The others are based on what words could possibly fit in those locations and their corresponding lengths. For example, in the bottom right, we have a word that must end in 's'. We only have three options for this (SCARS, SONOROUS, and FORENSICS), the minimum being 5 letters long. 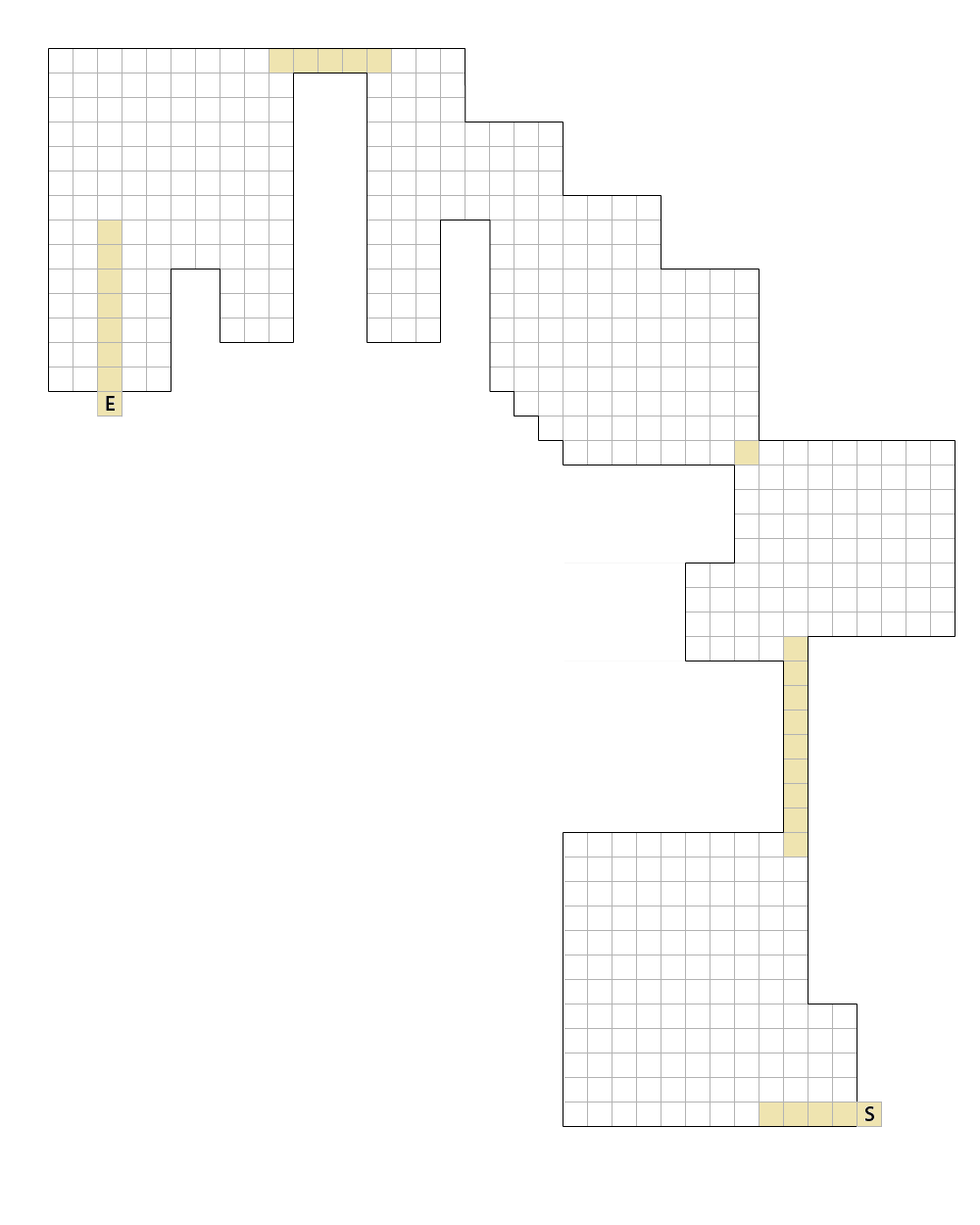 The critical region column in the bottom right is at least 9 letters long, cutting the number of possible words for this region in half. Further reducing that number, if the word is a 9-letter word, then the two words that branch off of it must end in those letters. As an example, we could not put FORENSICS into that column because we have no words that end in F. (see diagram) 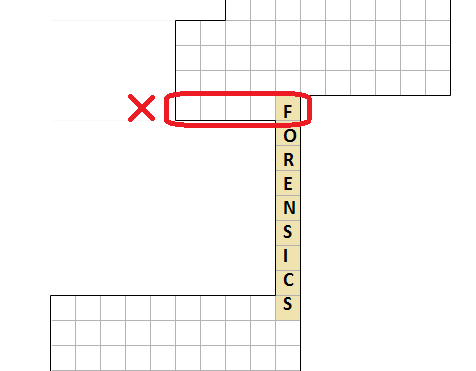 Not the answer you're looking for? Browse other questions tagged cryptic-clues mazes anagram metapuzzles or ask your own question.