What is the snake trying to tell us?

My friend's pet snake told this below message to us...

As others have pointed out, this pattern represents

Snaking across the keyboard

But the message that I get from the snake is

"I'm going to escape" because, at the end, it's headed towards the escape key.

Well, the pattern is

a zigzag path across the keyboard,

but I'm not a Parselmouth, so I don't understand the message.

Well, he is trying to say

As per definition mentioned here

It is trying to tell you that

your Caps Lock is on. Otherwise, the text would be "pl,mkoijnbhuygvcftrdxzsewaq"

For a specific reason,

the snake could not type those capital letters without the Caps Lock being on, since it has no hands/fingers to hold down Shift.

Well the snake is trying to say,

the snake don't like to be with your friend.

I think the sinuous pattern goes from left to right, not right to left. The reason being that the Q-A-W-E-S-Z looks more like the tail of a snake to me, than the head, as it makes tighter turns. So I think P is the head.

What the snake is telling us:

With P as the head of the snake, it's pointing at the -, + and = keys. The snake is identifying itself as an Adder.

I think the snake is trying to say:

It's feeling out of sorts

though it has traversed the entire alphabet, it has done so in a snakelike way across the keyboard and not any normal order (sort)

The pattern is a zig-zag across the keyboard (thanks @PeregrineRook). That zig-zag suggests a folded snake to me. Especially the WAQ part, which suggests a head.

Reading that sentence as: PL,MKOIJNBHUYGVCFTRDXZSEWAQ

and also as backwards appears as a zigzag on keyboard as: QAWESZXDRTFCVGYUHBNJIOKM,LP

Since he is speaking of snake, it can be a snake that can go in both(forward and backward) directions in zigzag pattern.

Since snakes's muscle does allow it movement in backward direction,analysis ended in a "snake that appear to go in both direction in zigzag pattern"

There are certain snakes whose tail has similar features of its head which belong to sea snakes.

So the snake is telling that its one of those sea snakes which appear to move in both direction in zigzag pattern. 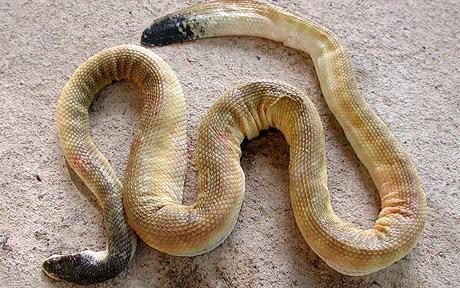 11
My friend's snake will make me rich. Where should I take it?