Why are these shapes impossible to draw with the given rules? 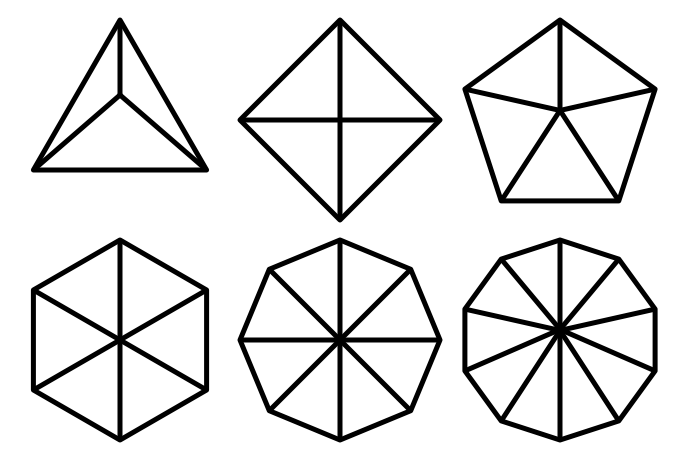 The image above shows a group of shapes, all with lines leading to their center point. These shapes cannot be drawn with the following rules:

This can be done within shape, not just the above. Why is this?

This is a variation of the Seven Bridges of Königsberg puzzle.

The answer is you can't trace out the pattern if more than two nodes are odd. We call a node "odd" if it has an odd number of lines to it, and "even" if an even number. (If a node is not an endpoint of the drawn line, then the drawn line must enter that node the same number of times as it leaves it, so the node must be even. So the only nodes that can be odd are the endpoints of the drawn line. Because a single line has two endpoints, a beginning and an end, more than 2 odd nodes would indicate more than 2 endpoints.)

Not the answer you're looking for? Browse other questions tagged geometry explanation or ask your own question.

17
Drawing something using one pen stroke

53
Join all circles together only with 6 lines
4
Check to see if a Configuration is Possible: prove there's an Hamiltonian path on a connected subset of the square grid graph
37
Which 3D shape can you make out of this?
17
Drawing something using one pen stroke
1
Would this shape be impossible to number given the rules?
13
Not Quite a Pipe Dream
3
Aluminum Foil Folds and Cut
9
Cutting a shape into two equal area shapes
1
How many lines are needed to connect all smiling toasters in a 4x4 grid?