How many balls can fit in the box? [closed]

I think the answer isn't as simple as the question. So, I need your help. :)

Experiment shows that dropping the spheres in randomly will achieve a density of around 65%. However, a higher density can be achieved by carefully arranging the spheres as follows. Start with a layer of spheres in a hexagonal lattice, then put the next layer of spheres in the lowest points you can find above the first layer, and so on – this is just the way you see oranges stacked in a shop. At each step there are two choices of where to put the next layer, so this natural method of stacking the spheres creates an uncountably infinite number of equally dense packings, the best known of which are called cubic close packing and hexagonal close packing. Each of these arrangements has an average density of $\frac\pi {3\sqrt2} = 0.740480489...$. The Kepler conjecture says that this is the best that can be done—no other arrangement of spheres has a higher average density.

So your answer is

Since this is supposed to be a puzzle (not just a math question), I assume any loophole can be used. So, I'll say an infinity of balls can fit in the box.

The trick is that the description doesn't explicitly require all the balls to fit at the same time in the box. Since any 1cm diameter ball can fit the box, there's an infinity of existing and hypothetical balls that can fit in the box.

The optimal pattern of packing spheres is pretty well known, not as widely known is the fact that this pattern has 7 different orientations where the spheres are all organised in layers of simple patterns. In four of these orientations the spheres are aligned in a triangular pattern, in the three other planes they are aligned in a square pattern. The key to this puzzle is to rotate the pattern so that the wasted space along the sides of the box is minimised.

An orientation where the three square planes are aligned with the walls of the box happens to fit extremely well, as a 71 ball wide configuration is $99.995\text{ cm}$ wide. In this configuration the bottom of the box is filled like so: 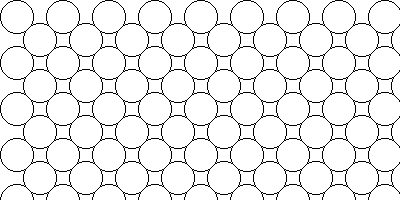 With 71 balls bordering each edge, for a total of $71^2+70^2=9941$ balls in the bottom layer, the layer on top of it will use the same pattern, but be shifted so that the balls lie in the holes between the balls in the bottom layer, this will allow one ball less. These two layer configurations are then repeated until there are 71 configurations like the first layer, and 70 like the second layer. This gives a total of $71\times9941+70\times9940=1401611$ balls.

I don't have the exact value or formula to how to calculate this. But I want to show how you should think.

So if this question was in some simple elementary school test, answer should be obviously 100x100x100=10 6 in total. Because it uses simple square packing.

However there are few other more packing styles like hexagonal packing, you can actually use empty spaces that occurs on square packing.

As one can see, in square packing height of two lines is 2cm. But in hexagonal packing it is less then 2cm. You can try and use much more space with different packing types. After finding right packing, you can calculate exact value.

If the structure of the spheres does not need to be maintained, you could melt down the spheres and they would occupy $.52\ \text{cm}^3$ (from the volume of a sphere: $\frac43 \pi r^3$) each resulting in:

2
How many moves are at least needed to find a ball that is from the majority?
6
Drawing balls from a pocket
56
How can I convince my colour blind friend that his two balls have different colours?
17
Blind Person Ball Game
2
How many codes are possible?
24
A COVID-19 puzzle: How large a class do you need to fit 30 pupils?
7
There are $3$ boxes with total $27$ balls. Find minimum number of steps to get to equal balls in each box
7
Can you distribute the balls equally into 2 boxes?