Some of our Professors are Missing

It has emerged that four members of the mathematics department at Farthingbottom School have been working on a top-secret code-breaker for the government.

Unfortunately for them (and the school) someone has found out and they have all gone missing. The only hope of finding them is to decode their files which are encrypted on the server.

There are six canvases hanging on the wall of their research laboratory. The first four of these show the members of the team:

The Fifth canvas has been deliberately hung at a slant, but the picture on it is this: 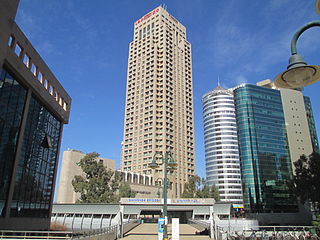 The final canvas shows the following lines of text:

Putrid steak kills the unusual smell of aromatic flowers on each jasmine plant which can be found growing around John's expansive garden in the countryside of southern Madrid.

Burning every day, the bright fire in the temple was wasteful.

Stow our daughter's birth certificate near the rest of our extra-precious documents, wherever they might be.

Question: Can you locate the means of decrypting the files?

As noted by Rand and others the fifth canvas hints at:

This is further cemented by the more subtle hints of the 2nd, 3rd & 4th canvases, which allude to:

Leonardo of Pisa's Liber Abaci which was a "particularly weighty tome" (canvas 2) containing "complex calculations" (canvas 3) and was written in 1202, the same year that Canute VI died (canvas 4).

So extending from what Rand already tried, but with:

the Fibonacci sequence indexing letters into each sentence of the sixth canvas and ensuring we use the full sequence, starting 1, 1, 2, 3, 5, 8, ..., we get (with each initial letter repeated):

Madden dashed ketchup between my turkey fillets.
Putrid steak kills the unusual smell of aromatic flowers on each jasmine plant which can be found growing around John's expansive garden in the countryside of southern Madrid.
Burning every day, the bright fire in the temple was wasteful.
Stow our daughter's birth certificate near the rest of our extra-precious documents, wherever they might be.

So it appears that our professors worked together, with:

Professor Maxwell making the key, Professor Peters putting it in a jar, Professor Bannister burying it, leaving Professor Sutherwell standing where it is buried... Which, as can be seen in the first photo, means that the key is buried in a jar in the school grounds, near the "FARTHINGBOTTOM SCHOOL" sign.

As others have already deduced, the photograph on the fifth canvas is

the Leonardo Tower in Israel: 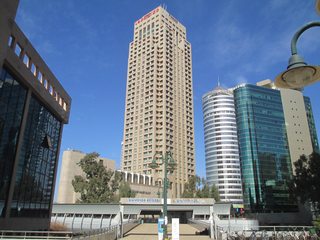 we're looking for a leaning tower, of which of course the most famous is at Pisa.

So we have the words

Leonardo and Pisa, which when put together give us the mathematician Leonardo of Pisa, better known as Fibonacci.

Clearly this means that

are somehow involved in the solution. The obvious place to look is in the message on the sixth canvas, so we pick out

Putrid steak kills the unusual smell of aromatic flowers on each jasmine plant which can be found growing around John's expansive garden in the countryside of southern Madrid.

Burning every day, the bright fire in the temple was wasteful.

Stow our daughter's birth certificate near the rest of our extra-precious documents, wherever they might be.

Thus the final message appears to be

MADE A KEY LSAT.

Maybe LSAT (L-sat?) is some electronic decryption method, or maybe this is only a partial solution. I haven't done anything with the first four canvases, of course, but there doesn't seem to be much information to be had there: just the four professors and the name "Canute VI", which may be a red herring. (Applying the same method to "Canute VI" as we did to the text of the sixth canvas gives

CANute VI or CAN'T I,

which doesn't seem to be any use.) Additionally, the name "Tony Steller" is, as already noted in the comments,

an anagram of "Letters only",

but my interpretation of this is simply that we're meant to

ignore all spaces and punctuation in the text of the sixth canvas, as I did when counting letters.

Not the answer you're looking for? Browse other questions tagged knowledge steganography anagram or ask your own question.

8
Which are the missing dates?
3
Our life and death are one, we two
12
Some friends are happier than others
4
What are we? And where is our brother? Hints galore!
11
Our puzzling friend
4
The Missing Agent
9
Some Patriotic Steganography
8
What are the missing letters?
9
Are we there yet?
6
Major aliens, some good, some bad