Mystery on the trail to Dutch Flat

Really, sign $\normalsize\sf\color{#d90} A$, really?   Dutch Flat Trail is in both directions and on the way to itself?   This turned out to signify both, a mistake and a mystery!

The mistake was not in the information but in the design of its portrayal. The numbers shown are true travel distances from these signs, although separated unhelpfully from additional information not shown. (Distances were originally in miles, incidentally, but this version is not locali${\kern2mu \sf\scriptsize \rlap{ \raise8.5mu s } \raise-2mu z \kern2.5mu}$ed.)

The mystery is: What information is missing?

Start at the park entrance.
• The sign there differs from the others in a reasonable way.
• All signs are at three-path ⊥-shaped junctions, as shown by arrows, of two or three trails.
• No sign may be visited more than once.

Every junction is represented by its sign above, so you won't need to enjoy exploring the park in order to figure out the layout of its trails or the meanings of these distances. Trails meander and do not obey geodesic constraints such as triangle inequality.

This requires no electronic technology to solve and is just a puzzlingly presented example of an actual public-park sign-design puzzle solution gone awry the wild. Every park's layout is already like a puzzle whose clues are trail signs, which many visitors find puzzling enough even when they are sensibly designed. I really did have to figure out what these meant-to-be-helpful signs really meant.

How to Read the Signs

Walking right, in 0.1 units an intersection will be reached. The second sign in the same direction indicates that the shortest path to the entrance is 0.7 units.

The missing piece of information is whether the sign points to the entrance or an intersection.

This extra information is applied to:

Signs A, B, and C.
The reason that extra distances it isn't listed for E and F is that their shortest paths are direct edges to the entrance and therefore an extra sign is not needed.

D because it is the only one at the head of three paths. 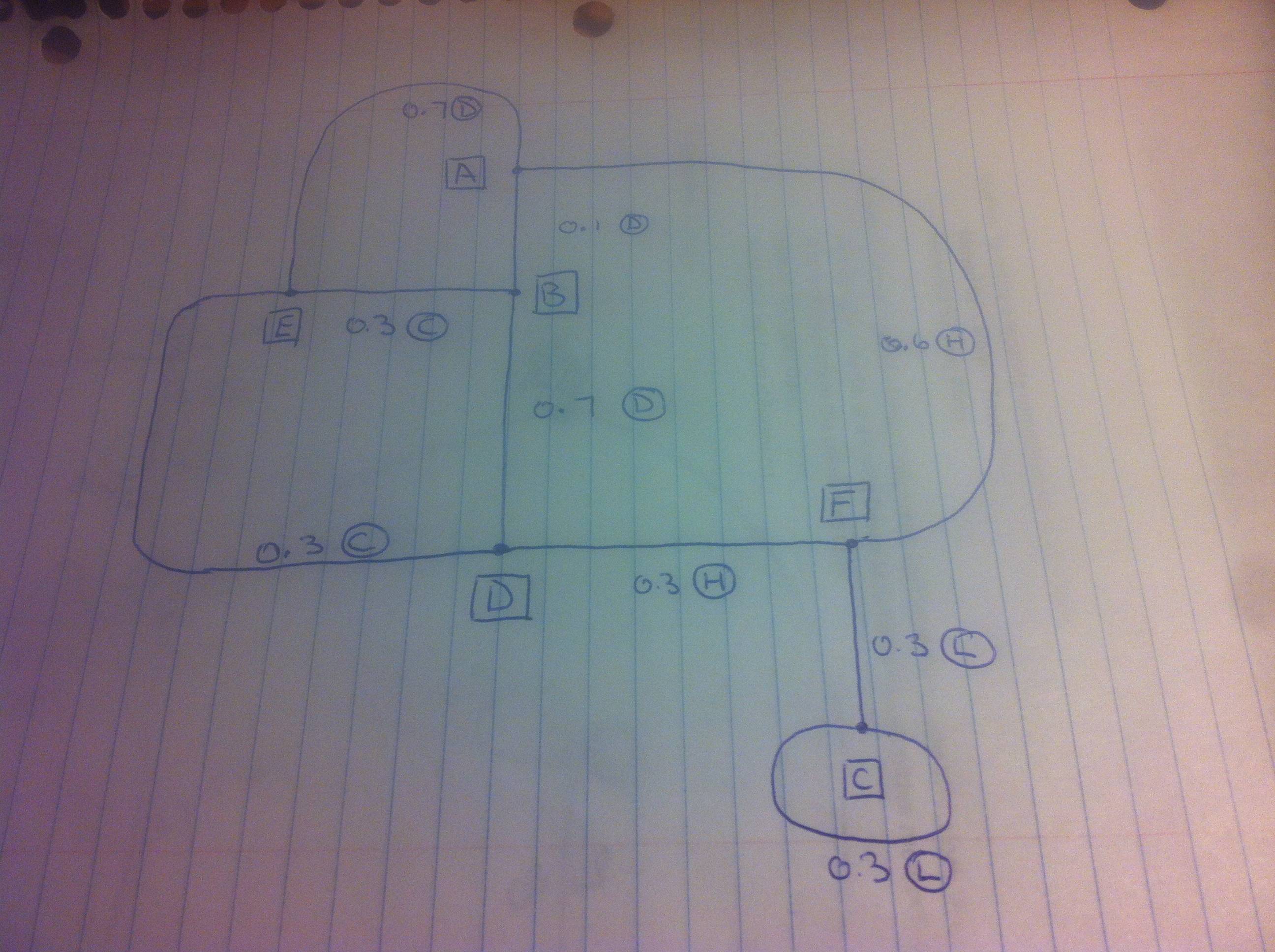 The longest non-overlapping path from the entrance is:

I'm not sure exactly what the mystery really is here, because these signs don't seem particularly confusing to me. (Which doesn't at all mean that I've interpreted them correctly; but my problem is "too many interpretations" rather than "no interpretations".)

As I understand it, the challenge is to explain how it can make sense for one sign to point to the same thing in two opposite directions, or at two distances in the same direction. Here are two (to me) plausible ways it can happen. First:

Something like "Dutch Flat Trail .7" means "if you go this way, you will be on the Dutch Flat Trail, and the next point of interest is 0.7 miles along it". So, again, no contradiction in having two of these in opposite directions; indeed, if going to the right means you're on the DFT then you'd expect that going to the left also does. When there are two pointing in the same direction, as e.g. at the bottom of sign A, it means there are two points of interest nearby in that direction (perhaps they list all up to 1 mile).

We could distinguish between these

if there were a sign with two different trails named in the same direction; that would be consistent with the first possibility but not with the second.

We don't have that particular clue. My feeling is that the second option would be more plausible if it weren't for the cases where the same trail is named twice in the same direction, but that given that the first is a bit more likely.

I can't find many pictures of posts from the actual site online, but the ones I have found seem to favour the second explanation.

There's a further subdivision of options: in either of the two cases above, having two distances a,b listed in the same direction could mean that the next-but-one point is at distance b or at distance a+b.

As for the puzzle here, with the constraint that the junctions shown here are all the junctions in the park (as indicated by humn's comment below), it seems to require the second variant of the second option above. I'm having trouble fitting everything together correctly and need to get some sleep, but for now I offer the following tentative answer which might be right even if some bits of my scribbled map are wrong:

The terms 'Dutch flat trail', etc. do not describe destinations, but the type of trail, i.e. 'Dutch flat' might be flat, 'Cañada' might involve scrambling, 'Lollipop' be suitable for kids (or similar). So the signs are simply saying what type of trail goes off in each direction. IE the names are adjectival.

The reason for 2 x 'Dutch flat trail' in the same direction is because there you can travel 0.1 mile that way, and either turn off onto a different type of trail, or do a further 0.6 miles on the same type of trail

I'm working off of Gareth's 2nd option (trail refers to the trail you are walking along, distance is distance to next point of interest), which I also think is the correct interpretation.

For signs A, B and C, which indicate two trails in the same direction but for different distances, the shorter length might be literally a point of interest (something like a landmark or interesting sightseeing spot). However, they are not junctions. The longer distance indicated is the distance to the next junction along the stated trail.

So the missing information is:

The reason why x units from the sign is marked out (is it a landmark, another junction, or interesting in some other way?)

Not the answer you're looking for? Browse other questions tagged enigmatic-puzzle graph-theory real or ask your own question.

14
Touching coins flat on a table
10
Ridge Trail moisture mystery
23
What does 1+1=?
10
What does the Misleading Trail™ lead to?
4
Unlock The Mystery
3
Why are the tires flat on one side?
6
The Alchemist leaves a trail
8
Intersecting shapes on a flat surface
0
Trail passing through squares of a grid