Can I Haz My Eye Center'd?

Alice has painted a cat on a white disk such that the left eye of the cat is exactly on the center of the disk. Inspired by it, Bob grabbed a white disk of the same size and sat down to paint on it a cat exactly same as Alice's. But after he finished, he noticed that the cat has the exact same size and shape, but he has got the position wrong; its left eye is not at the center. Now he plans to cut the disk into pieces and reassemble them, so that he can get the cat's left eye at the center of the new disk, but he doesn't want to change the shape or size of the cat or the disk. How can he do that with making the fewest possible pieces?

Place Alice's disk on top of Bob's such that the cats match up. Cut off the part of Bob's disk that lies outside Alice's. The cut makes a circular arc that has the same distance between the endpoints as the part of the original perimeter that lies on the piece with the cat on it. Since the two circular arcs also have the same radius (and span less than 180° of the perimeter), you can move the cut-off lune to the other side of the main piece, and the two pieces now cover Alice's disk perfectly. 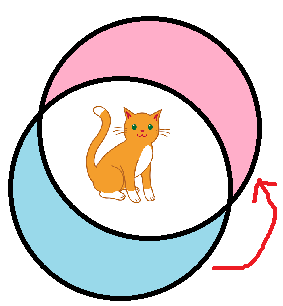 (Or a different image by Carl Löndahl: https://nup.pw/YK9cjY.png)

If curved cuts are not permitted, it may be possible, depending upon the size and placement of the cat, to cut a regular polygon which is entirely within the circle but outside the cat, such that rotating the cutout by some number of steps will put the eye in the right place. The old position of the eye, the new position of the eye, and the center of the polygon should form an isosceles triangle whose "odd" angle is appropriate to the number of faces on the polygon. It would be possible to place a large cat in such a way that no polygon-based solution would work, but if the cat is small enough any placement which isn't too close to the edge should suffice.

If the cat and the error in placement are small enough, make a circular cut of the same radius as that of the disk, extending all the way from one point A to another point B on the edge of the disk. Then turn the crescent-shaped cut piece by 180 degrees so that its end which used to be at A is at B and vice versa. (Same as Henning's answer, I now see.)

30
Dissection Puzzle - The Umbrella Stand
4
Can I Haz My Eye Center'd 2?

9
Dissect a square-and-a-half into 4 equal pieces
7
Maximum number of pieces of equal area you can obtain by cutting a pizza a certain number of times
34
Cut the disk with a hole in four equal pieces
30
Dissection Puzzle - The Umbrella Stand
18
Dissect the frog
18
Squaring a cross
6
Squaring a cross one more time
4
Can I Haz My Eye Center'd 2?
0
Concerning Tetrahedra
17
Sharing a field among 4 sons