Dotting the eyes and crossing the teas. But where is the PIN?

The two friends move on to the next room.

"You know what, the moving and flashing painting next door was nice."

"I'm glad you found something you liked. How about this piece? A plain painting combined with a real keypad being glued in. I wonder if we really need this PIN to get to the next room...."

"Likely. What is the painting called, maybe there is some hint?"

"It's strangely called Dotting the eyes and crossing the teas."

"Oh, well. I guess you better take out your HUD, because I will definitely not touch the keypad without the proper code. I've been burnt before, you know...." 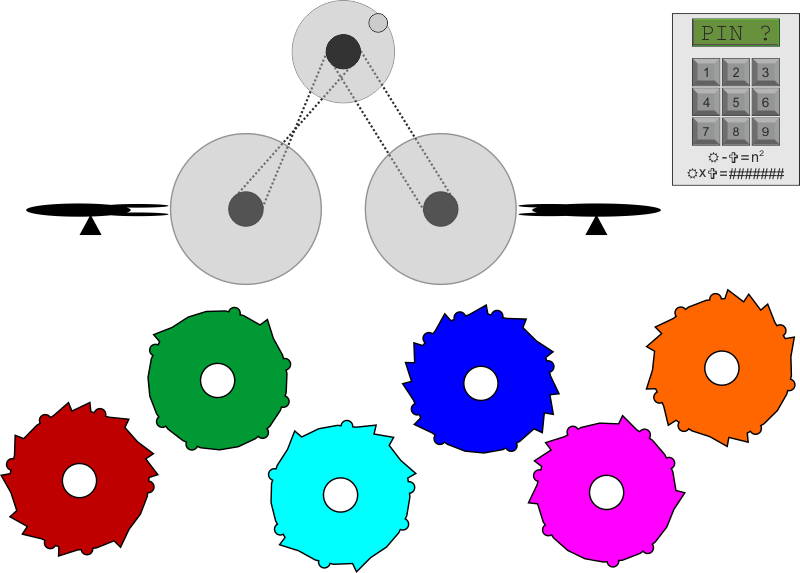 The task is to find the 7-digits PIN code from this image and to explain how it can be found from the image. It is coded into what you see, so no need to get number crunching with the digital data.

I've added the enigmatic-puzzle tag on purpose and you may want to post partial answers or comments as well. (Seeing the thought-process of solvers helps me improving my puzzles. And, ah, to spot mistakes, if there are any.)

The result came from a great group effort. I hope I've correctly identified and summarized the process followed.

The two wheels will be turning in opposite directions. Three wheels have the 'ascending t notch' (for lack of a better description) going counter-clockwise (Red, Cyan, Blue) and three have them going clockwise (Green, Magenta, Orange). We can then pair them up with one another as the 'ascending t notch' will cause those things on the sides to bend downward, then snap quickly back up (think of the Wheel of Fortune wheel). I'd like to think that this causes some kind of sound to play so we'll hear a bunch of clickety clack.

With that information, we looked into pairing the cogs together. From Poolsharker, GentlePurpleRain, and LeppyR64:

There are three pairs of gears that complement each other.

All pairs line up on the bumps (the 1s) and no two triangles (the 2s) ever overlap. There are a couple places where the flat areas overlap. A graphical representation of the above: 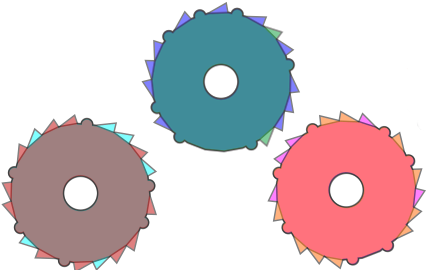 With that knowledge, we looked into what it could mean. From LeppyR64:

Here are the possible orientations and assignments:

From here, we focused our attention on the PIN pad. From Verence:

And extended from the train of thought of Verence, I found:

A picture is worth a thousand words but sometimes I like numbers.

Here is a definition of the gears in the direction that they spin so that the slope of the triangle shapes would lead into the seesaw pieces.

Don't forget that these are gears, so the numbers continue in a circle. The ends of the lines are adjacent to the start. The gears could be mirrored to fit on the opposite spindle.

My first look at this and all I could see was this: 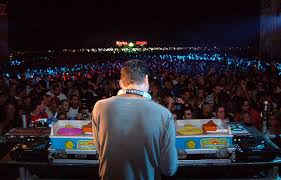 Using the gears as laid out by GPR: 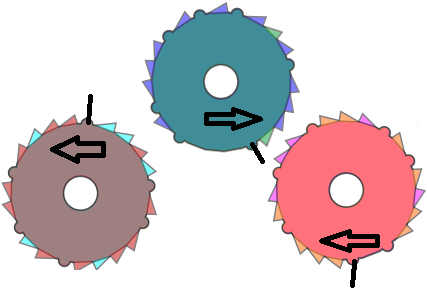 Here are the other possible orientations and assignments:

Let's get this started! From the strange contraption, we can deduce that

The two wheels will be turning in opposite directions. For the images that follow, I will be rotating the center wheel clockwise. This in turn causes the left wheel to turn counter-clockwise and the right wheel to turn clockwise.

So, let's try fitting the cogs into the contraption. We notice that

Three wheels have the 'ascending t notch' (for lack of a better description) going counter-clockwise (Red, Cyan, Blue) and three have them going clockwise (Green, Magenta, Orange). We can then pair them up with one another as the 'ascending t notch' will cause those things on the sides to bend downward, then snap quickly back up (think of the Wheel of Fortune wheel). I'd like to think that this causes some kind of sound to play so we'll hear a bunch of clickety clack.

Here are the fittings that I believe go together

By overlaying them on top of each other, you can see that the 'i' and 't' parts line up so that they will strike the side things at the same time. 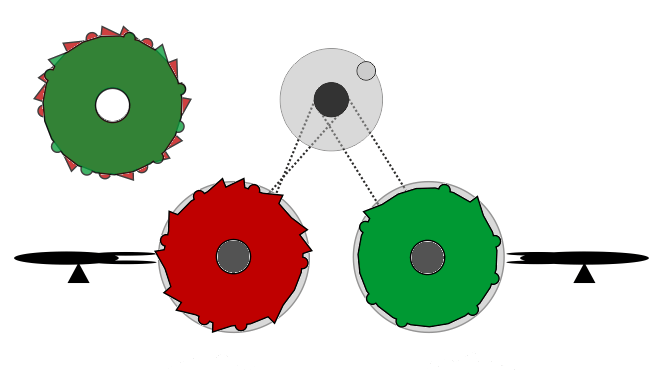 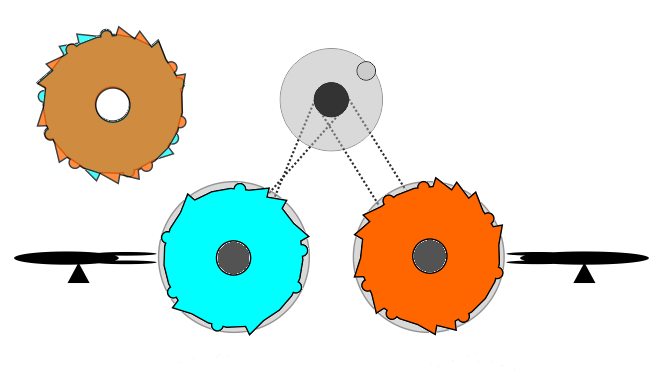 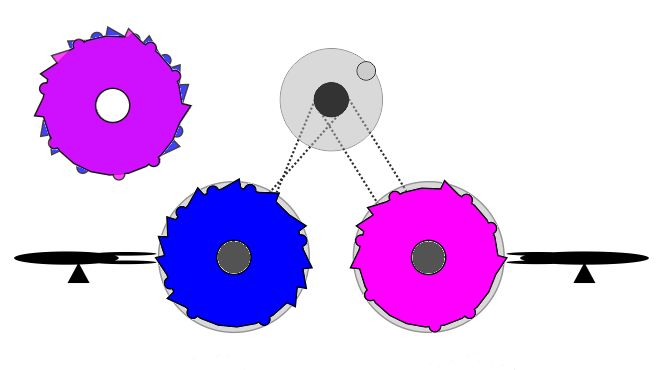 A possible direction to go from here

Morse Code
Take the 'ascending t notches' to begin the sound, and the 'i' dots to stop the sound. Consecutive notches would be a tick tick tick '...' and notches that take a while to stop would be a tiiiiiiiick '-'
Side note... "Dotting the eyes and crossing the teas" could be a hint towards morse since the dots of i would be the . and the cross of the t would be the -

I think the PIN is:

Using the numbering from Leppy's post, Green and Blue are opposites that line up on the bumps.

However Red only has 6 bumps and the only other one with 6 is Cyan, which is in the same direction as Red.

EDIT: On further review with fresh eyes, they are not opposites...both have a section with three blank spots between two bumps.

Trying to combine the observations and strategies from previous posts, I noticed that there are three pairs of "gears" that complement each other. Using LeppyR64's notation, and rotating some of the gears, we get the following:

(these are the numbers given by LeppyR64, but "rotated", so some of the digits have been moved (as a block) from the beginning to the end)

Note that in each of these matchups, all the 1s (bumps) match up, and no two 2s (triangles) ever overlap. There are a couple of places where the flat areas overlap, so that even with the two "gears" overlain, there is still an area without a protrusion.

A graphical representation of the above:

I also noticed that the gears come in pairs, but I didn't notice that there are some spaces left when merging the two gears, thanks @GentlePurpleRain.

I want to note that the picture name obviously refers to the hint on the keypad. We need to get two numbers: "dot" and "cross". "Dot" - "cross" equals to some number squared and "dot" * "cross" is the PIN.

Since the gears are used to code Morse's name, maybe these numbers aren't related to them directly but rather to Morse himself.

Update: still didn't come up with "eyes" and "teas" but what if

I feel that we're very close.

48
What does this modern art picture represent?
48
What is the title of this modern art painting, if not "Stars and Stripes"?
20
What is the central color?
45
Lepidopterology needed!
16
Dedicated image - but dedicated to what/who?
25
Find the number code in the picture
22
Sweet! Dream! Another hyper-modern art piece
17
A friendly jigsaw
16
Clockwork orange?
32
Rebuilding the Rio 2016 Olympics logo