How many steps are visible on the Escalator?

How many steps are visible on the escalator?

120 steps visible on the escalator (I think)

Since Alice takes 3x as many steps per time as Bob, and her trip was 150 steps while his was 75,

that means Alice was on the escalator for 2/3 as long as Bob was, because she took twice as many steps, but moves at 3x the speed.

So the equations we can set up are

Solving those gives us

So just to double check

We'll measure time in units of how long it takes for one step to emerge from the bottom or disappear at the top of the escalator and distance in units of steps.

with every step, Alice moves 5 steps down the escalator while the escalator moves her up one step; net movement of 4 steps; so she takes 30 steps to reach the bottom. On each of those she counts 5 steps, yielding 150 as required.

Sanity check: for the particular case asked here we get

I'm assuming that "steps are visible" refers to steps beeing seen, i.e "at the surface" ?

If so, - and taking any of the computed N steps answers from the others

I believe the corect answer should be 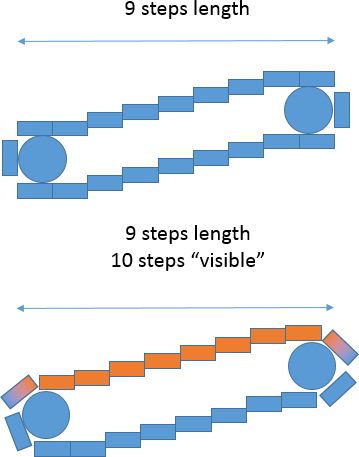 "How many steps are visible on the escalator? "

Well, that depends on many mathmatical things, what counts as a step, etc. So, I'm going to round off and say:

Half of them, of course!

As already said by (almost) everyone else,

But all the other answers are just working through the numbers. Let's algebra this!

The system can be expressed as:

We can re-write those equations as:

So we want to solve for $l$. Let's rearrange:

Which (eventually) rearranges to:

And we can find out the relative speeds too (absolute speeds can't be found since we have no time values given in the question):

Knowing only that Alice covers 3 steps each time that Bob covers 1 step, nothing further needs to be considered about speeds.   In fact, the escalator may move erratically, or even not at all.

Picture five identical escalators in sequence, effectively forming a single escalator 5 times as long. Start Alice coming down from the very top at the same time as Bob starts up from the bottom.

They will collide after Alice descends 3 escalator lengths and Bob ascends 2 lengths. 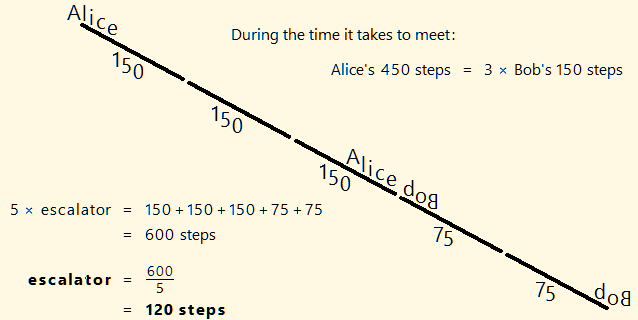 The total number of visible steps is always the sum of Alice's and Bob's steps so far plus the remaining steps between the two.

When Alice and Bob collide, that total is just their combined steps.   So why 5 escalators?

As per my calculations, answer is:

Let us assume that the number of steps is $x$
The upward speed of the escalator is $y$ $\frac{steps}{second}$.

This is another derivation of the same result, but shows that the speed of the escalator can not be determined and could be any suitable constant value (provided that it does not outrun Alice).

Alice is slowed down by the escalator, but in a time $T_a$ she will have walked enough to compensate the loss of speed, and will have covered $n$ steps, the length of the escalator.

Bob is sped up by the escalator, and in a time $T_b$ he will have walked enough to cover $n$ steps, the length of the escalator.

Alice walks faster than Bob by a factor of $3$.

Bob starts going up the stairs. When he is 25 stairs up, Alice starts coming down. They meet roughly in the middle and have a very painful tumble!

This and none of the other answers could be correct. What escalator has more than 20 steps?!?