Some other place in the gallery...

"You know, I really like this piece of art."

"Yes, it's colourful and blinking and stuff. Finally, something which looks really modern to me!"

"No, I didn't mean that. Yes, the paining is nicely augmented with those flashing LEDs and the rotating rings at the bottom, but that was not what I was referring to."

"I like, how the painter has once again managed to cleverly hide the title of the image in the image itself. That's so hyper-modern-art-ish!"

"Hmm, without my HUD I can not see the title anywhere in the image. It is somehow fitting, though. Would you care to explain it to me (once again)?"

The task of the puzzle is once again to find a secret keyword (the title of the painting) from the image. Note, that the static image (link below animation) is in theory enough to solve the puzzle. The keyword has more than 4 and less than 12 letters.

The piece is titled

Credit to @Deusovi for the final decoding! My original method was overthought and didn't produce readable text, so look to his post for how that portion is done. I'll leave my observations here, as they may serve the wary puzzler looking for more clues.

Check out @Deusovi's answer for more details about the semaphore translation!

The puzzle's title is

(I'm going to refer to the lower middle assembly of rings as the "orrery", since I need a convenient name for it, and it vaguely reminds me of one.)

The rings of the orrery all can rotate, as the GIF shows. We have eight rings, eight colored lights, and eight clocks, so the natural first thing to do is to try to associate them. The missing dots from the rings around each clock correspond to the "holes" in the orrery's rings, so that gives each ring a corresponding clock. Then, we can use the lights to align the orrery rings in a way so that every light is used once. With the colored lights given (and one ring already given to us), there is only one possible way to do so. Lord of dark's answer explains the logic in full detail.

Those associations give us this image, helpfully provided by Lord of dark. (Ignore the hands drawn on the lights: they're unnecessary.) 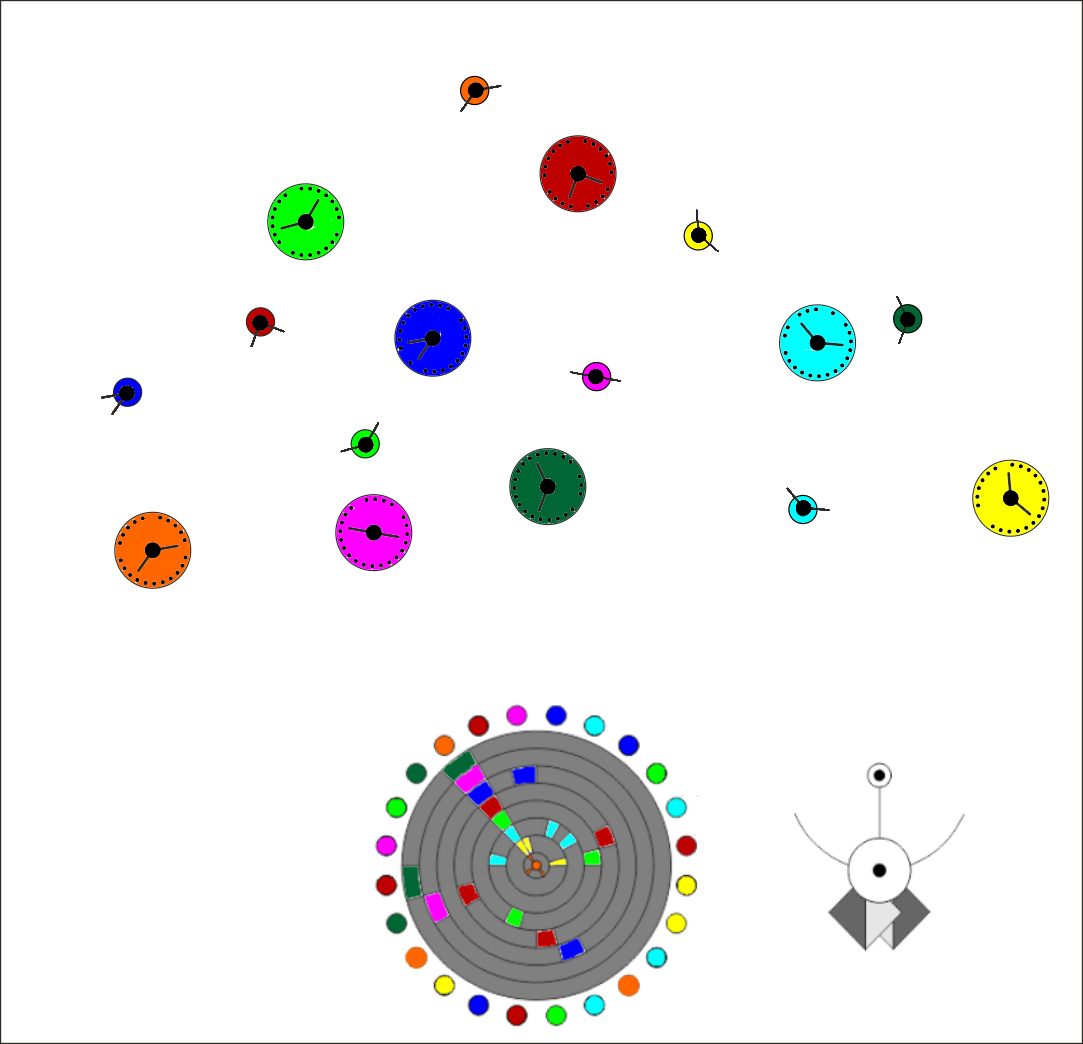 Now we've used the orrery to match up each clock with a colored light. The bird tells us what to do: those are the standard flags in Flag Semaphore! If we take the direction of each clock's corresponding light as "up", we get letters in Flag Semaphore from the clocks' hands.

Here is the image, with lines from the "head" to the "body" drawn in. (Arrows are used so that lines don't go straight through the clocks.) 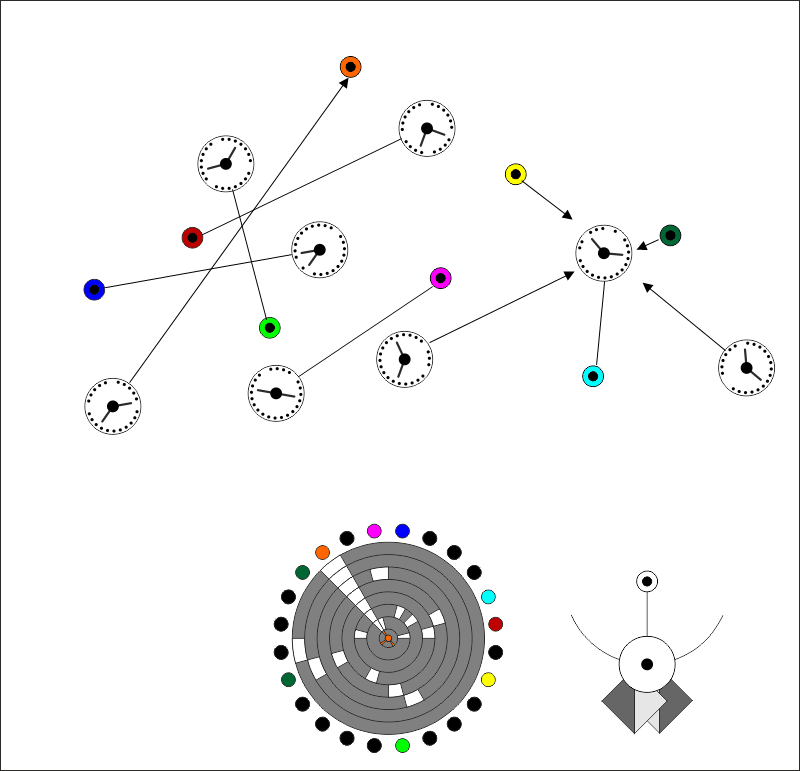 Now we can read off the correspondences left to right in order of the heads to get a letter from each one.

So the puzzle's title is...

Partial answer based on observations by @cyberbit:

The white patterns int he rings of the big clock all match a pattern of the missing points in the small clock.
The middle ring is orange so we can guess that every ring matches a color and we will find the same patterns in the color around the clock. Let's number the rings from 1 (in the middle) to 8 (the outside one). Here is the reasoning to match the rings with the colors :

This is the final big clock : 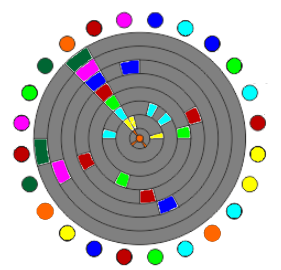 We can now associate each small clock to its pattern color. I have also reported each clock arrows to the corresponding color point.

From here I don't know what to do, I've tried to extend the arrows but it doesn't look like anything...

Answer as intended by OP

The puzzle has been well solved by cyberbit and Deusovi (with some insights from Lord of dark), but as the path to the solution somewhat deviated from what I had originally in mind, I want to give a 'complete' answer to the puzzle as I thought it would be solved.

The animated, turning wheel shows eight rings of which seven seem to move freely. The innermost, ring remains static and is the only ring which has a colour (orange). The wheel is bordered by dots of which only few show colours.

On closer inspection one can notice:

Which leads to the hypothesis that one possibly could...

..rotate the 7 rings such that one patch lies in each of the 24 segments.

Matching clocks to the rings

One also notice that the clock faces all show a whole circle of 24 black dots spaced 15degree apart, from which a few dots are removed on each. One can easily notice...

Thus, each clock can be uniquely assigned to a single ring.

Matching colours to the rings

The orange color matches to an orange dot on the outside to which one of the ring-sections is pointing. The other two sections point at black, 'unknown' dots. It seems that there should be a connection between rings an colours.

Seeing that only the 7 white rings move, we can arrange them according to our earlier hypothesis: 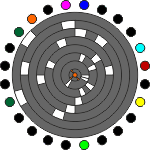 We now note,that each ring has one patch pointing to a color and the others to black. Dark green is an exception here, with both of its sectors pointing to dark green, verifying that this rotation is a 'match': 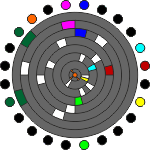 With this, we have uniquely assigned a colour to each ring. We also notice that

the sequence of color-flashing of the leds matches the sequence from inside to the rim. (orange->yellow->cyan->green->red->blue->pink->dark green)

so that we can directly get 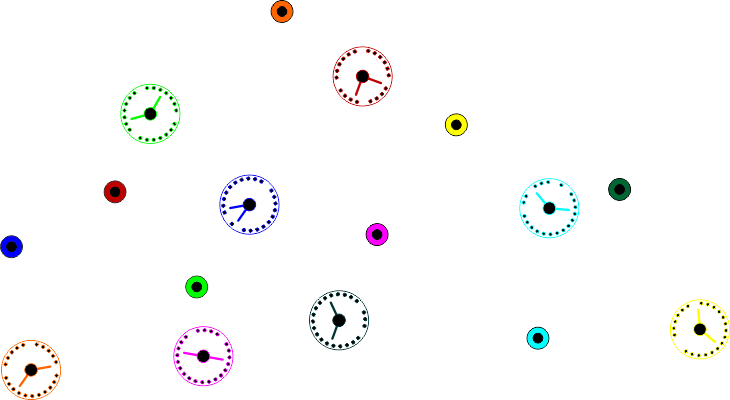 The strange drawing in the bottom right indicates that 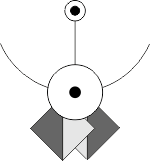 If this is done for all of the clocks, one gets from: 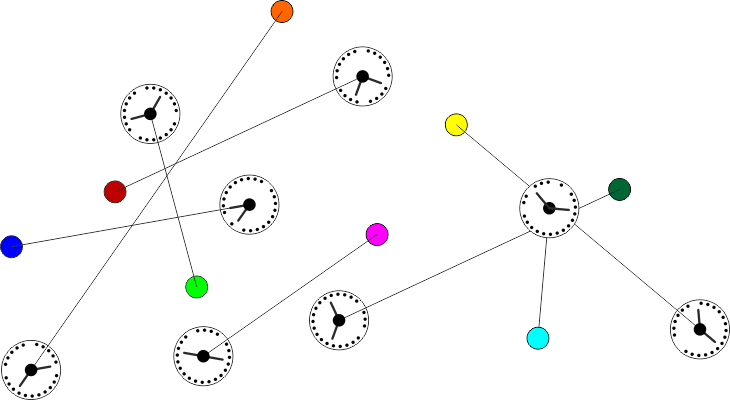 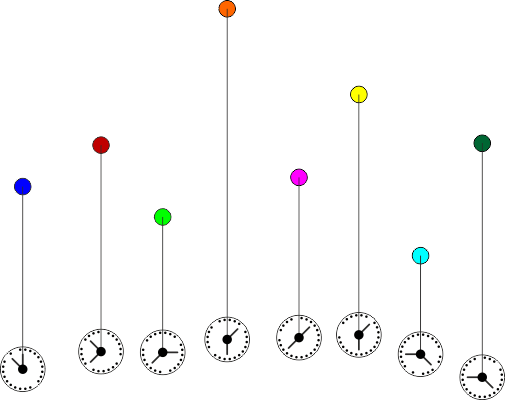 As verification one can notice that

With the clocks now all being arranged, the last hint stems again from the little drawing: 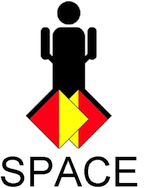 which is a symbol of the semaphore flag alphabet

Using the hands of the arranged clock faces, this directly translates:

46
What does this modern art picture represent?
41
What is the title of this modern art painting, if not “Stars and Stripes”?
20
What is the central color?
38
Lepidopterology needed!
12
Dedicated image - but dedicated to what/who?
23
Find the number code in the picture
17
Sweet! Dream! Another hyper-modern art piece
15
A friendly jigsaw
24
Dotting the eyes and crossing the teas. But where is the PIN?
30
Rebuilding the Rio 2016 Olympics logo