A visual riddle about an artifact 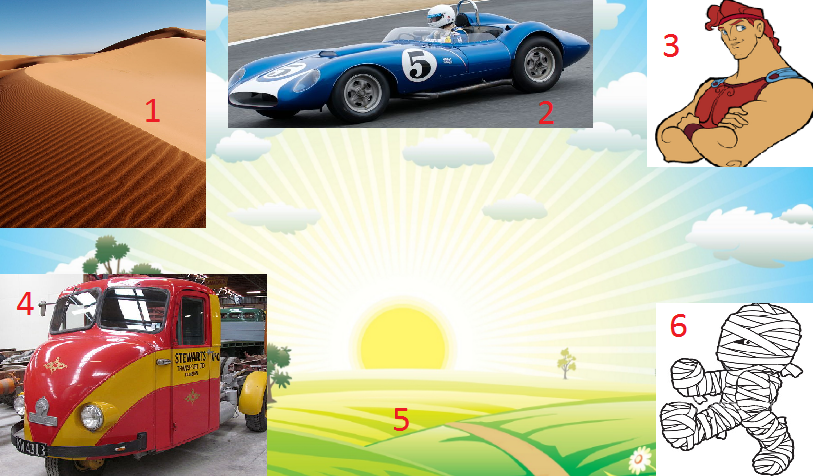 Can you explain (all numbers) what/who I am?

The order of the numbers doesn't matter.

A sand dune. Andrew's dune scarab beetle is an endangered species of beetles in Southern California.

Herakles or Hercules as seen by Disney. The Hercules beetle is a beetle of the Scarabaeidae family.

A British made three-wheeled tractor, the Scammell Scarab. (The name is not a reference to scarabs, but a contraction of Scammell and Arab horse, though.)

A sunrise. The Egyptian god Khepri was the solar god of the sunrise and is often depicted as human with a scarab's head.

An Egyptian mummy. In Ancient Egypt, scarab amulets were sometimes used as burial objects. The puzzle's title is an allusion to such artefacts.

Not the answer you're looking for? Browse other questions tagged riddle visual knowledge or ask your own question.

4
Riddle Poem: “I go by many a name…”
7
A Magical Riddle
9
Going to the movies
4
A visual riddle about a figure
1
Here's a clean and easy visual riddle
12
Riddle about gingers
9
Matchmaking in Animalia
7
Three Visual Puzzles
14
The witch's hex visual riddle
3
Guess the hat colors - Riddle 3