There is a reason sudoku uses squares

There exists a 9x9 grid with the cells in one single row numbered 1-9 in order. The cells in the other 8 rows are initially empty. 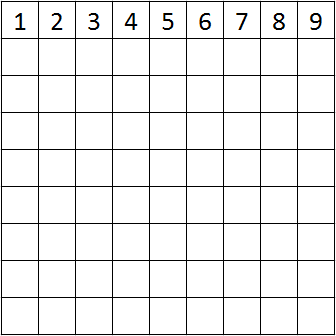 Note: The cells initially containing numbers can be in any one row; not necessarily the first.

Draw borders to divide the square into 9 non-intersecting continuous regions containing 9 cells each such that you make a sudoku-like puzzle with a unique solution. You may not add any additional numbers or hints. A sudoku-like puzzle, for this question, has the following rules:

There is a unique solution to the following 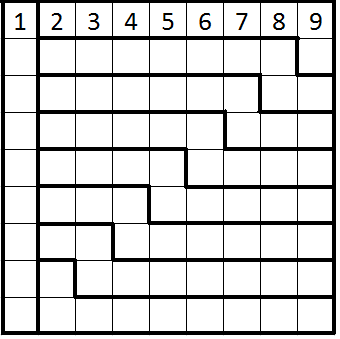 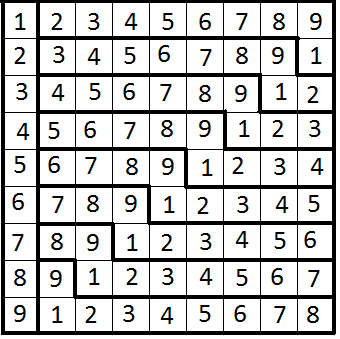 Let us use the following notation:
The rows from top to bottom are given the labels $A-I$
The columns from left to right are numbered $1-9$ (as with the top row).

We can continue this line of reasoning, next starting at the entry in $D9$, calling this $y$ and proceeding diagonally left and down to find $y=3$.

In this way, we can fill the entire grid, recursively always beginning at the topmost entry in column $9$.

Side notes and footnotes

The Sudoku variation in question turns out to be called “Du-Sum-Oh,” along with some aliases, and cells 1– 8 by themselves can force a unique solution without being given cell 9.

Hexomino’s original answer1 revealed how delightful this puzzle is but I had forgotten the details months later when mentioning it to a fellow Sudoku enthusiast, so some variety ensued.

The layout on the left, with straightforward numbering, has a very sleek route to solution 2 whereas the numbering on the right demonstrates that an irregular set of initial numbers can also force a unique solution and be amusing to solve 3 if you’re in the mood.

Progress came from starting with small boards while experimenting with simple zigzags and L shapes. The 4×4 and 5×5 layouts along the way were misleadingly efficient 4 and led to an unnecessarily awkward 9×9 layout.

1 Synopsis of the three stages in Hexomino’s original solution. (Circles ◯ spotlight cells that were most recently filled or are immediately determinable at the steps shown.)

2 First and last steps of the present straightforward solution. (Circles ◯ mean the same1 as above.)

3 Synopsis of a solution for irregularly placed initial numbers. (Circles mean the same1 as above.) 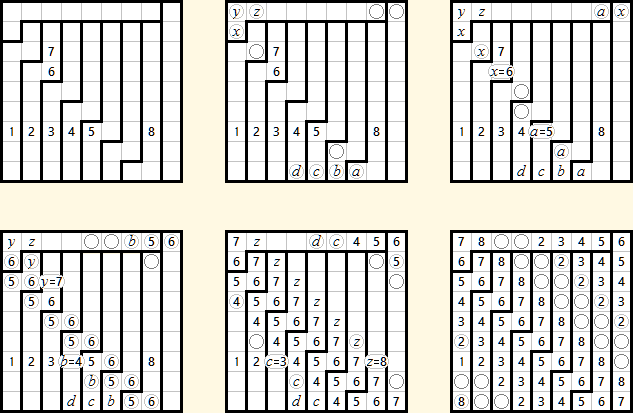 4 Solutions of the 4×4 layout in just two steps and of the 5×5 layout in four steps.

Edit: Angel Koh came up with another solution to my layout, so it is non-unique. 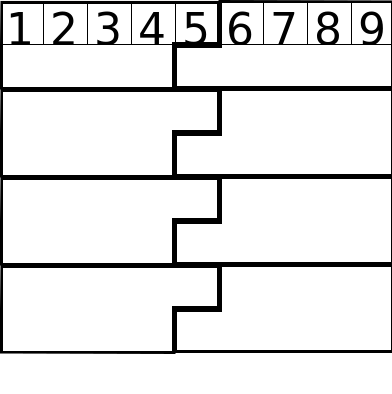 Has a unique solution which is: 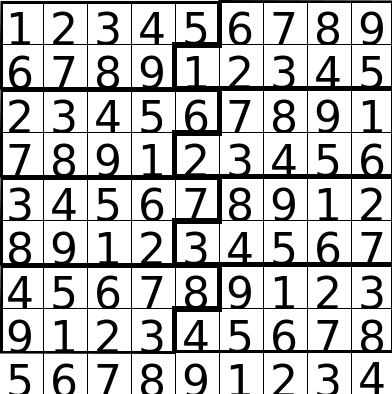 Although I am not sure how to prove it.

19
Your Task Is to Create the World's Hardest Irregular Sudoku!
17
Sudoku with only 8 predefined numbers
8
A spartan skeleton Sudoku