Highest possible score my friend could earn in one Scrabble turn? [closed]

My friend has a great vocabulary but is also quote humble.

Every time we play Scrabble he wins easily. He says he tries his best, with one exception:

Using standard Scrabble rules and a standard dictionary what would be the highest scoring play my friend would be wiling to make in a game?

Count no only the letters values of highest scoring word but also:

Edit: Although I believe the problem can be "solved" if some basic assumptions are made regarding the need to use certain bonus squares thereby severely restricting the number of possible (primary) scoring words to be played, I have made the question open ended in case there is room for further improvement.

As a baseline answer:
1780 points from this placement of oxyphenbutazone, or if this is somehow proven to be the best with an English standard dictionary, without the circled "S" for 1779 points. 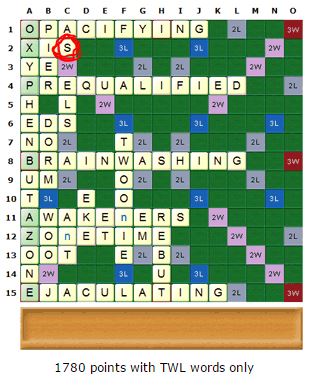 Since there is a lot of confusion over the wording of the puzzle, I'll give my interpretation:

See this site for further exploration with non-standard dictionaries.

Hypothetical Records
NOTE: These hypothetical records were established before the introduction of OSPD 4 and have not been update for OSPD 4.
Highest Single Play
1,778 points: OXYPHENBUTAZONE, found by Dan Stock (OH) in 1996
Other words formed were (O)PACIFYING, (Y)ELKS, (P)REInTERVIEWED, (B)RAINWASHING, (A)MELIORATIVE, (Z)ARFS, and (E)JACULATING.

Byrne found this play in 1982 using words from unabridged dictionaries. The word itself is from her own book Mrs. Byrne's Dictionary of Unusual, Obscure, and Preposterous Words The word isn't found in that form in any standard unabridged dictionary, though the OED lists SESQUIOXIDIZED and SEXQUIOXIDIZATION.

If we only allow words that actually do appear in standard dictionaries, then BENZOXYCAMPHORS for 1,962 points - found by Darryl Francis, Jeff Grant, and Ron Jerome c1986 may be the record.

However I do not think that this can really be considered a puzzle then, since it's more just trivia.

Here's one to give a rough idea of how high a score is possible:

SULPHINPYRAZONE for 1502 using a blank for a P. Now he could have placed the P tile on the triple-word square A8, but instead places the blank there and the real P at A4. I'm sure other people can squeeze a few more points (or a few 27s of points) out of this.

The board after the high-scoring play is

Here's one way to adapt the high-scoring word

OXYPHENBUTAZONE using a blank for an E. Now he could have placed the E tile on the triple-word square A15, but instead places the blank there and the real E at A6.

If one is playing against an exceptionally cooperative opponent who never challenges any words, no matter how outrageous, I think the maximum would be 2449 when playing against a single opponent. Showing just the tile values, one would start with the rack 10 10 8 8 5 4 4 and the board:

Filling in the top row, with the two ten-point tiles on the double letter scores, would yield a total score of:

A total of 3212 when playing against a single opponent. For each additional opponent, move seven single-point tiles from the bottoms of the short columns to gain seven more points. I think the maximum possible number of tiles one can score with on a single play while achieving anything close to this score is 94, since four single-point tiles and two blanks must be used to connect across six of the eight columns where scoring is not possible.

Not the answer you're looking for? Browse other questions tagged logical-deduction word open-ended scrabble or ask your own question.

21
Craft the longest Scrabble sentence
23
From Puzzling to StackExchange
4
Largest Complete Scrabble Block
14
Scrabble Impossibilities
14
Words with Puzzlers
22
What is the highest possible scrabble score for placing a single tile
25
Lowest total scrabble score
8
How many times can the “X” tile be used in one Scrabble game?