The kids moved when we were gone! What is the likelihood that white is winning?

Two friends were playing a friendly game of chess. The both have young children who they recently taught the rules and they agreed both children could help if they wished.

In the position below (black to move) the two friends took a short brake for dinner. The kids took a few extra minutes to follow for dinner and when the first of them arrived, he surprised both adults

Both friends knew that by piece Noah did not mean a pawn and that him capturing one piece was no more likely than capturing another.

If Noah played Bxf4 there was an 80% chance, Jane would have moved her knight and 20% she would have done something else. If Noah played Bxf4 and Jane moved her knight the likelyhood of her moving it finding the best square would be (2/n) with n being the number of legal knight moves. All other sub optimal knight moves would share the same probability.

What is the likelihood (in percentage terms) that white is winning the game? 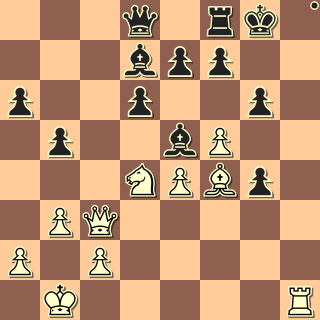 Only two pieces are capable of being captured, not counting pawns

If Bxf4 was not followed by a knight move, white is losing

Not the answer you're looking for? Browse other questions tagged logical-deduction chess or ask your own question.