Bob then correctly announced $C$. "We already know this game." he said.

The professor thought for a moment, then said, "Alright, I'm thinking of a new piece of information $C_n$.". He then handed new envelopes $A_n$ and $B_n$ to Alice and Bob.

"So you could have done this for any non-negative integer $n$?" asked Bob.

"Any non-negative integer." said the professor. He handed them a new pair of envelopes. "These should keep you going for exactly $1001$ iterations."

She stared intensely at her card for a moment, and then triumphantly announced the solution.

The professor smiled and wrote down two new cards for the two players. "But finite numbers are so provincial. Let's play another round, shall we?"

Just as the pair were about the begin, the professor interrupted: "I should probably tell you, though... no matter how many iterations you play through, you will never figure this one out."

"Yes, sort of - it's actually the ordinal number $\omega$, which works similar to an 'ordered infinity'. You can do a lot of the same things with it that you can with the numbers we're all familiar with. The only major issue with throwing in $\omega$ is that addition and multiplication pay attention to the order now."

"I have it!" said Alice, "There's only one possible value of $C$ compatible with the information on my card and which would keep us playing forever."

She then announced the correct value.

The professor handed them fresh cards. "Again, this one can't be figured out after any finite number of iterations."

"Indeed." said the professor, "In fact, even with the information I've given you, you still will never deduce the solution."

"And even $\omega^2$!" the professor said proudly. "That is, no finite number of iterations of my telling you that you still can never deduce $C$ would be enough information for you to solve the puzzle, but the previous part of this sentence would. We could go farther, too! $\omega^3$, $\omega^4$, even $\omega^\omega$!"

How can we come up with a puzzle like that of the professor? Standard ways are for $C$ to be a pair of numbers, $A$ the sum and $B$ the product, but I don't know this allows us to obtain any number of iterations, not even any finite number.

I have written on Alice's paper an even ordinal and on Bob's paper an odd ordinal. Who has the lesser ordinal?

Then, after $\lambda$ iterations of the game, it is common knowledge that both players have an ordinal of at least $\lambda$. Obviously, if the player whose turn it is has $\lambda$, they immediately know that they have the lesser ordinal, but if they have some greater ordinal, they do not know.

The professor says that he is mentally pointing to one of the numbers in the below infinite picture. He tells Alice which of the red groups the number is in, and tells Bob which of the blue groups it is in. He then asks them each to state, over and over, whether or not they know what number is being pointed to (he is not asking the location, just what the number is).

Edit: Corrected a mistake: $100_\omega$ wasn't contained in any blue group, so I had to add the "numbers" X and Y to the diagram. If the professor points to these numbers, then the process will never end. 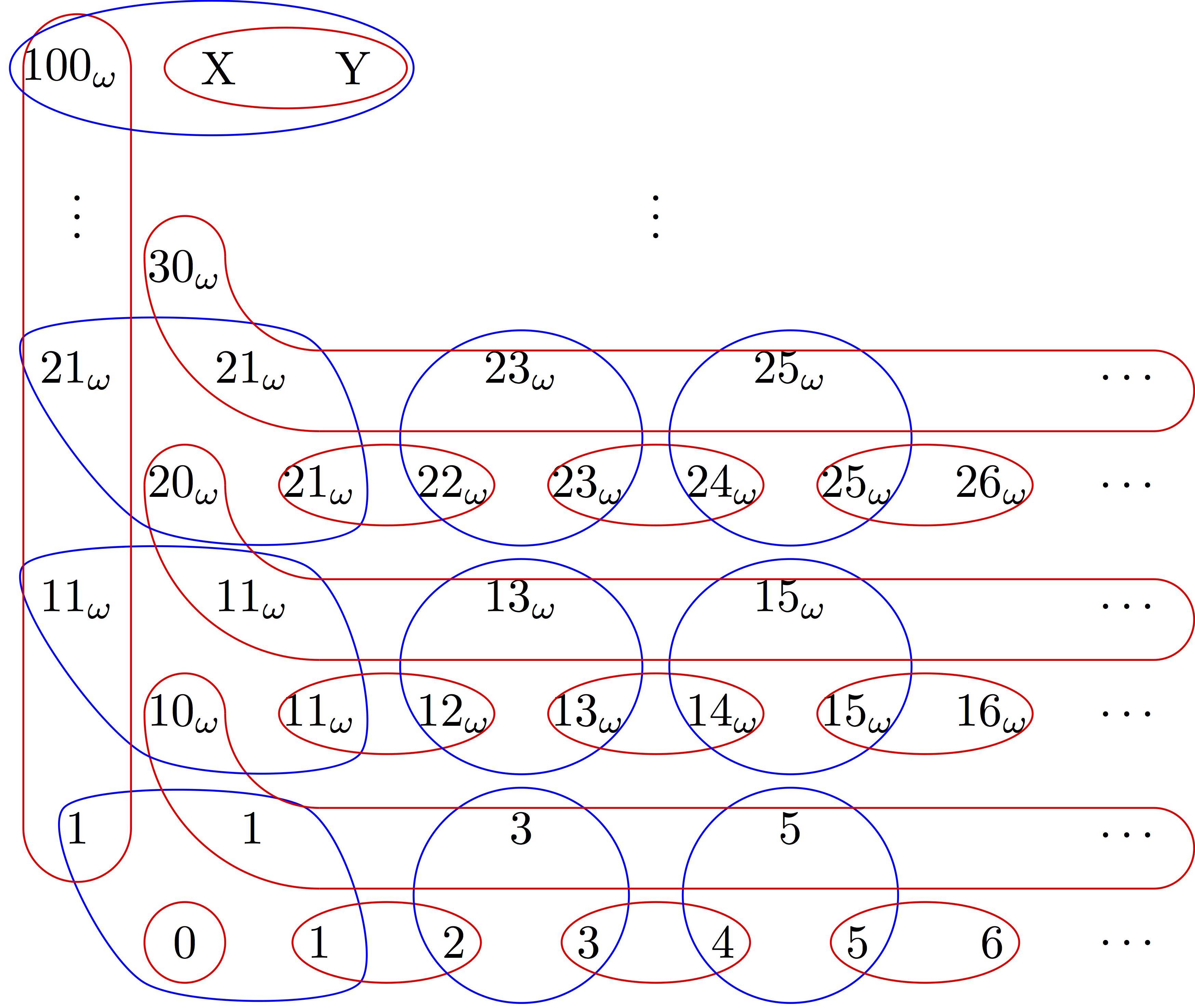 Let us take the following special case of this sort of puzzle:

For every possible piece of information $C$, there is only one possible $(A,B)$ pair that would lead to the conclusion.

In particular, this means that Alice will figure out $C$ exactly when she figures out $B$ and similarly for Bob. This lets us forget about $C$ entirely and work with only the structure of the pairs $(A,B)$ which are admissible - i.e. that correspond to some possible $C$.

We model the situation as follows: Consider a graph $G_0$ where every possible piece of information $A$ that Alice knows or $B$ that Bob knows is a vertex. An edge connects $A$ and $B$ if and only if $(A,B)$ is admissible. This graph is common knowledge, implicit in however the professor frames the puzzle. The professor has selected some edge $(A,B)$ and told Alice one vertex and Bob the other, and the goal is to determine the edge the professor chose.

When Alice says "I don't know $C$", she is exactly telling Bob that $A$ is connected to more than one $B.$ Thus, we model this by constructing a graph $G_1$, which is $G_0$ with all the $A$'s connected to only one $B$ removed. Similarly, when Bob afterwards says "I don't know $C$", we can make a new graph $G_2$ by removing all the vertices $B$ of $G_1$ connected to only one $A$. We continue this process until one player's knowledge is a vertex of degree one, which reveals a unique admissible pair $(A,B)$ to them, corresponding to the value of $C$. At limit ordinals like $\omega$, we simply take the intersection of all the previous graphs.

For instance, if we play this game on the graph of the non-negative integers with edges $(n,n+1)$, then we get a solution for the finite case: The professor chooses a non-negative integer $n$ and tells Alice $\lceil n/2\rceil$ and tells Bob $\lfloor n/2\rfloor$ (using floor and ceiling functions). After $n$ steps, the answer will be announced.

Now, to handle the infinite case, the trick is finding a graph $G_0$ that doesn't stabilize at a fixed point $f(G_{\lambda})=G_{\lambda}$ before our desired ordinal. We can do this in a rather brute-force manner for any ordinal:

Let us first define a sequence of graphs $H_{\lambda}$ and identified vertices $v_{\lambda}$ which we will call the root. Define $g(H,v)$ as $H$ with all degree one vertices except $v$ removed. If $v$ has degree $0$, remove it as well. We will consider iterating $g$ by taking that for limit ordinals $g^{\lambda}(H_i,v_i)$ is the intersection of the graphs $g^{\lambda'}(H_i,v_i)$ for $\lambda'<\lambda$. We want $g^{\lambda}(H_{\lambda},v_{\lambda})$ to be the graph consisting of one point. This condition says that the graph "vanishes" at the right rate. We imagine that $H_{\lambda}$ will be a subgraph of a larger graph, where the root is connected to elements outside the subgraph, which is why we wait until it has degree $0$ to remove it.

As this works for all ordinals, I suggest the professor break out their favorite large cardinal axiom and see how their victims participants react.

For reference, here's what the graph $G_0$ looks like for $\omega$; obviously, both sets of paths should continue on to every finite natural number, but that would be hard to picture, and the people here are probably pretty good at imagining how patterns continue: 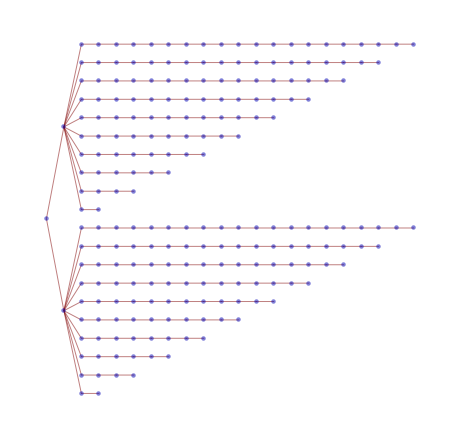 If the professor chooses one of the leftmost edges, it will take $\omega$ iterations to determine it, since that suffices to eliminate all the edges except the leftmost two. 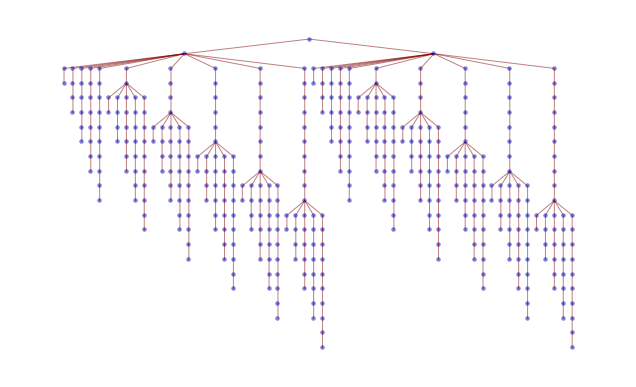 Obviously, each of those little subtrees actually extends infinitely, like before, and there are infinitely many of them under each of the two branches.

21
Determine the number $r$ from the statements
3
Number of candies
20
Sum of secret numbers is 101
8
Picking A Number Game
26
A game of multiplication and addition
18
Rearrange the Sentences, Cross out the Wrong One, Fill in the Blank, and... Do Some Logic!
2
Guess the numbers
10
Alice, Bob and Charlie know the sum, product and the difference between two numbers
8
Alice and Bob play a game
2
Adding up divisors of integers