You are the praetor of Tri, a small triangular-shaped nation bordered on the northwest by the Kingdom of Sauria, on the northeast by the Sultanate of Avia, and on the south by the Republic of Cryosta, as shown below. 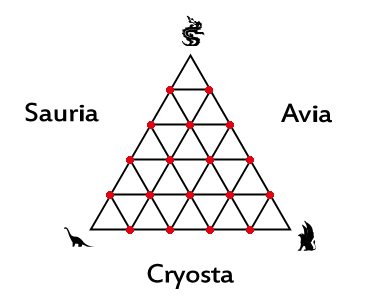 Tri is divided into 25 small triangular provinces as shown, each of which has a bustling peasant town at its center. There are also 21 empty monster dens in Tri, which are located at its three outermost corners and at 18 points where the provinces converge (shown as red dots).

In an attempt to boost your flagging economy, you've accepted an enormous sum of gold from your neighbour nations to import 21 of their unwanted monsters, which you plan on placing into your 21 dens (1 monster per den).

The three types of monsters you can import are:

You can import as many of each monster as you want, but your neighbour nations have placed some restrictions on where certain monsters can be placed:

Additionally, while the citizens of any one province in Tri can raise arms to defend against one or two types of monster, defending against three types of monsters would overwhelm them. Hence you've resolved that no province may have monsters of all three types in the three monster dens adjacent to it.

Can you meet the demands? Are you up to the challenge?

Respondents are politely encouraged to place answers (i.e. spoilers) in spoiler blocks, so as not to spoil the fun for other puzzlers. :)

This is just Sperner's Lemma.

Sperner's Lemma is a mathematical theorem that says that no arrangement can satisfy the criteria in the question. More exactly, it says that if you:
- Divide up a triangle into smaller triangles (in any way!).
- Colour the points of the diagram with three colours.
- Arrange your colouring such that each colour is "banned" from one of the sides of the big triangle.
Then one of your small triangles has to have different colours at each of its three corners.

Replace the colours with creatures and you've solved the puzzle!

I'll prove Sperner's Lemma below. The proof looks quite long, but that's only because I'm trying hard to explain every step in detail. For the short version look at the top of page two here (which is where I got this proof from in the first place).

Now lets think about the number $X$, which is the number of red-green edges on the outside of the diagram. Red points are banned from one side of the big triangle, and green points are banned from another, so red-green edges can only appear along one of the sides. This is the side where blue is banned, so it has only red and green points along it. It has a red point at one end (where it meets the side where green is banned) and a green point at the other (where it meets the side where red is banned). Start at the red end and work your way along towards the green end. The colour of the points must change from red to green and back again an odd number of times in order to end up with a different colour to what it started on. Each change gives us a red-green edge. So $X$ is odd.

At first I tried coloring the dots on the map. I made trampleodons blue, gryphons yellow, and dragons red. This allowed me to color dots with two possibilities as green, orange, or purple, and with three as gray. I worked through the map a few times and kept coming up with the same solution, that you always met a situation in which the three areas had to come together.

I was fairly certain of the solution, but I decided to write a Python script to actually check each possible outcome (2,985,984 of them) and found that my original idea was correct, there is no solution.

It would be solvable without the edge conditions, but those prevent us from creating a solid wall of color to separate the other two.

I don't think it's possible. The most any one species can fill is up to the not-like neighbor (e.g. trampleodon and Avian). And then, to fill that remaining side, at some point one of the two species will have to switch over (either dragon to griphon, or vice-versa) at which point you'll have a triple species province
If you have each species fill out the 5 closest dens, which as no combination of the 3 middle to prevent the triple-kill.
Finally, if you were to try to go in a spiral (tramples along sauria, dragons along avian, gryphons along cryosta) the middle province would get triple-teamed again.

Long and short, since you can't get use a monster to cut off contact between the other two, you will always have an intersection of the three monsters.

25
Tiling a Hexagon with Diamonds
12
Droning On in Circles
9
What is the 'best' way to tilt through a D20?
8
Reassembling the Marquetry II: The Coffee Table Strikes Back
3
Lots of ships in the arbitrarily large battleship
3
What is the fewest amount of clicks needed to create a tier 5 tile?
6
Savage Road Signs (Part 3)
14
Sort 9 train cars on 3 paths
2
Four touching circles