A Tomb for Fibonacci

After much struggle in finding funding, a group of mathematicians has arranged to build a great big tomb for the recently deceased mathematician, Fibonacci, who is famous for defining the sequence $F_n$ of Fibonacci numbers. In honor of the mathematician and his accomplishments, the group decided to build a mathematically delightful tribute to him. They sent the following specification to the engineers:

The tomb shall be constructed in a series of rows of blocks of uniform height. There shall be a left hand side to this tomb, beginning at Fibonacci's birth place, and the tomb shall continue infinitely far rightwards and shall reach infinitely far into the sky, each row stacked upon the last.

The $n^{th}$ row shall be constructed of exactly two distinct kinds of blocks: Firstly, there shall be "big" blocks, which have a width of $F_{n+2}$. Secondly, there shall be little blocks, which have a width of $F_{n+1}$. Except in the first row, each big block shall sit squarely atop two blocks of the preceding row, with its edges lining up with an edge below it. That is, a big block must sit upon a big and a small block of the previous row. Each small block must sit squarely atop a single big block in the row below. This is all, of course, recalling that the big blocks of the row below have the same size as the small blocks of the current row.

For instance, the following is an arrangement which satisfies all of Fibonacci's constraints, except for the second requirement that all the rows be the same: 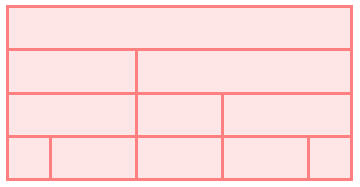 Unfortunately, it turns out that the engineers aren't quite sure how to construct a pattern which satisfies the second requirement, or how to make any infinite pattern for that matter.

What should the series of big and small blocks on the first row be to ensure that this tomb may be built according to Fibonacci's standards?

The sequence of blocks in the first row (LSLLSLSLLSLLS...) is known as the infinite Fibonacci word, and it has several nice characterizations.

The Fibonacci-like approach to describing the sequence:

Start with a large block in row $N$ ($N$ can be arbitrarily large). Now apply the following recursive rule:

Coloring - for each row - large blocks red and small blocks blue, the bottom-left side of Fibonacci's tomb becomes:

In each of the rows, the following sequence emerges: LSLLSLSLLSLLS..

2
Make a wide tower of bridge-shapes
13
The Monster Garden
19
Cube made of 2x2x1 blocks which blocks all light
19
Ernie and the Cake Cutting
16
Wooden Snake Puzzle
9
Ripple effects: A suite of puzzles and conundrums
1
Tiling rectangles with Heptomino plus rectangle #7
13
20-Questions on a grid
3
The best way to hire people
3
n rows and 18 columns