These Last Two Puzzles From An IQ Test

What are the solutions to these 2 puzzles. My brain hurts from trying to figure these out.

The choices are below the box. 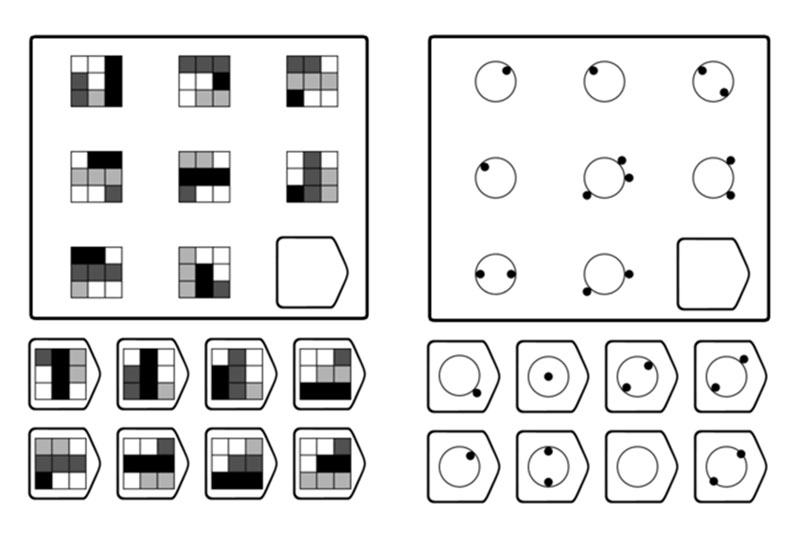 I think the first one is

on the following grounds which I very much suspect are equivalent to something clearer and neater if one thinks about it right:

In each row and in each column, the colour of the length-3 thing takes all three possible values once each. So in the bottom right it must be black. (This rules out three of the 8 possibilities given.)

So the colour of the length-2 thing has to be not-black (looking at rows) and has to be dark grey (looking at columns). This leaves only row 1 column 2 and row 2 column 3 as possible answers.

And the orientation has to be horizontal (same conclusion looking either at rows or at columns). That leaves only row 2 column 3 as a possible answer.

Again, I suspect that there's a better way to describe what's going on that leads to a nicer-sounding answer.

For the second one, I wonder whether the intended answer is

but again I am not much satisfied with my reasoning:

Count a dot outside the circle as +1 and one inside as -1. Then on each row the third column is the sum of the first two. Therefore, on the third row the sum is zero, which we presumably represent with a circle and no dots.

I find this unsatisfactory for at least two reasons.

First, this doesn't explain anything about where the dots are placed; that turns out not to matter for the bottom-right box which has no dots, but it seems a bit ugly if the positioning is just arbitrary and serves only to confuse. Second, the amount of evidence I'm going off -- basically just the first two rows -- seems insufficient: it could perfectly well just be coincidence that they work out.

I think I've seen another IQ-test-like question similar to this second one, with exactly this "addition" rule. This is one reason why I think it likely to be the right answer. (I don't remember that question clearly enough to know whether it's actually the same question.)

For the puzzle on the left

1. Each complete row and column contains $1$ vertical and $2$ horizontal entries. Choices maintaining this pattern are $\{d,e,f,g,h\}$.

The only choice maintaining all three of these patterns is $g$:

This is for First Puzzle.

Bottom And Second From right 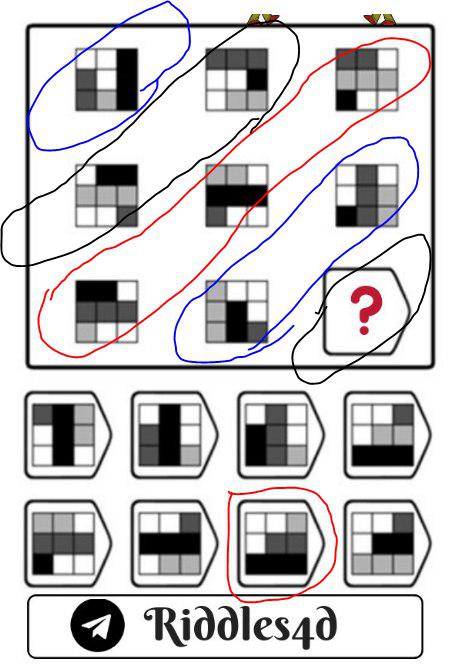 There is no concrete linear pattern though.

But if You consider diagonals as above you can see each diagonal has 1,2 and 3 Blocks of different length but same colour Also orientation of all bars in digonal remains same.

As our Matrix is in Black Diagonal orientation of all bars would be Horizontal and we can see that 3 Black Blocks,2 Dark Gray Block, 1 Light Gray Blocks are missing.

I have simpler solution to the left side puzzle. There are total 15 blacks, 16 grays and 17 lights. To make them equal, per pattern we need to add 3 blacks, 2 grays and 1 light. That leaves only two options b (row=1, column=2) and g (row=2, column=3). Now, 3- same-colored pattern are once appeared in each column and twice appeared in each row. That means all black needs to be horizontal....answer = g

The solution is the empty circle. In each row, there is summation to the right - the last one is a sum of the previous two (and subtraction to the left - the first one is the third minus the second). Dots inside are positive, dots outside negative. A similar summation/subtraction applies for columns.

I think the answer on the first question will be the fifth(bottom row first one) and I will quess for the second on the 3th answer. Not sure!

Always turn the highest placed dot to the right (in the first row) and left (in the second row). Overlapping dots are erased meaning that third row are the dots that remain.