This is about Nelson, a serial killer who, after each murder, leaves a chess diagram in the scene of the crime. These chessboards give the detectives the opportunity to decipher where, how and when Nelson will perform again. (Note: you should know how chess is played and how chessboard squares are enumerated).

Detectives Brandon and Makeda are the two agents in charge of these murders. Brandon, who is the superior of Makeda, won’t forget his black hat under any circumstance. There are also 2 things worth noting:

It is known this was the second victim of Nelson; the remains of the first victim were never found.

The lifeless body of a 19 year-old teenager was found hanging upside-down a tree. Right under the body, detectives found the first diagram and a very particular weapon next to it. Under the diagram there was a note:

You first, Makeda. Do it the best you can. And remember: I'm always one step ahead of you both. 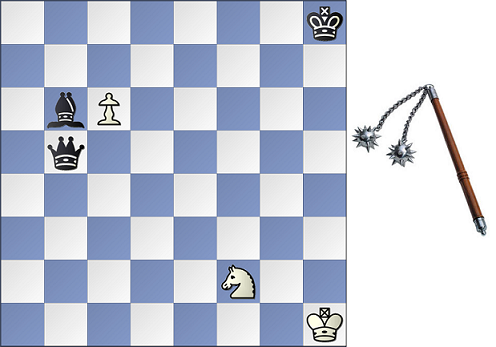 At the scene, the detectives found an old man’s body, with two shots to the head. Next to the body, there were three bullets; it seems that one of them was never used. The serial killer left this chessboard, with some g/unpowder spread all over the pieces. There was a note:

I love how weak my victims are, detectives. That's the beauty behind murdering people. 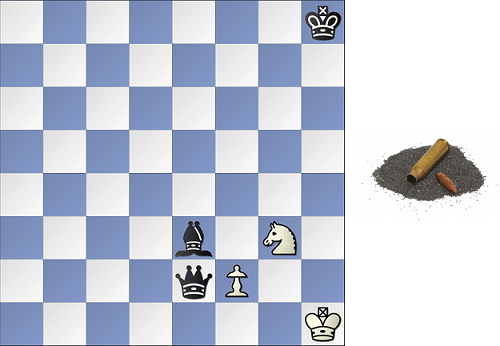 Detectives were feeling really agitated. Three murders in less than 3 months. They needed to stop this massacre, so this last chessboard was crucial to find a pattern and predict the next place for a possible crime.

A beautiful, mid-aged woman had her hands and feet tied down, three shots to the chest. She was lying on the grass, and there was no evidence she had been abused. Again, the typical chessboard next to her, with a note:

You move again, detectives. And know, by the way, I just broke down your car. Mine is wrecked as well, but that won't stop me.

Know, by the way, that while you are reading this note, I am killing my 5th victim! There I won't leave any chessboards whatsoever. Will you stop me before I kill my 6th victim? 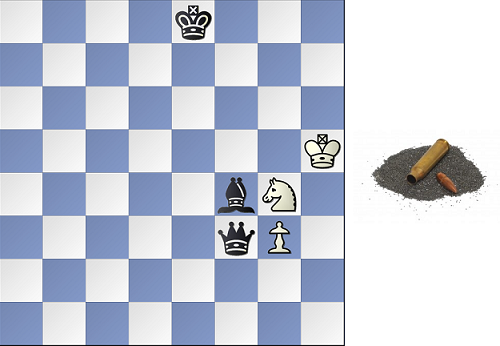 Scared of what they just read, they knew there was going to be a 5th victim. Having these diagrams and notes, detectives need to find out:

(Note: the dates indicated for each scene, are the dates for which detectives Brandon and Makeda find a dead body on the scene of the crime. This concides with the date when the next victim is being murdered.)

First, try to determine what role each piece play (i.e. Brandon, Makeda, Nelson and the Victim). You will note there are two extra pieces. Read through all notes carefully, and in particular, the 3rd note will give you a clue of what those 2 excess pieces are.

Detectives suspect that the weapons used to commit the crimes will help them identify which chess piece is playing the role of the serial killer. As some of you have noticed, I wrote g/unpowder instead of gunpowder, and this is not casual. By the way, detectives need to know the name of the weapon used in Scene 1. Can you help them?

All questions asked I have answered, with the mate-in-n idea from @RosieF. Whether my answers are correct, I have yet to see.

The knight is always where the victim will be, so the 5th victim is at g4

The fifth will have been done with a gun, the sixth with another gun. 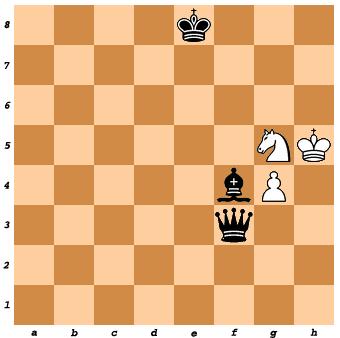 Makeda the detective. @RosieF found that googling Makeda returned the Queen of Sheba. She is left-handed: "greeting the queen with his left hand." (http://emc.eserver.org/1-3/jones.html)

Brandon the detective. "won't forget his black hat" -- bishops wear hats, and this bishop is on Black's side. He's the queen's superior because he's always a rank above her. Also, the bishop is always on a black square (not sure if this is intended or not.)

Nelson the murderer. Apparently the number of shots doesn't matter. But @RosieF has pointed out that one of George Washington's horses was called Nelson. (I don't know why I was thinking of Nelson's Column...)
(@Jasen:) On each board the position of the knight indicates where the victim will be found on the next.
(@Bulldogg6404:) The weapons used tell us which file the serial killer's piece is. flail begins with f (the f file) and gunpowder starts with g (the g file, also works with the wordplay "g/unpowder").

last (dead) victim. "I love how weak my victims are" -- pawns are the weakest piece. 2nd thing worth noting: "the detectives like keeping as close as possible to the corpse". So this must also mean that black queen/bishop are the detectives.

The kings are the extra pieces: 3rd note says "I just broke down your car. Mine is wrecked as well, but that won't stop me". In Slavic languages, "car" means "tsar"/"czar", the ruler/emperor. So the kings are the cars, and they're not working, but it apparently doesn't matter. Also, hint 1 "in particular, the 3rd note will give you a clue of what those 2 excess pieces are" implies that it is the kings.

The dates follow a pattern. Still not sure what the pattern is, thinking about it.

Fascinating! So far, I've noticed that, in scene 1,

and that in scene 2,

and that in scene 3

these are the 2nd, 3rd and 4th murders. That is, the position left at the scene of the $n$th murder is that of a mate-in-$n$ problem, with Black to move and mate. And with the same material. Perhaps the bQ is Nelson and the bB his sidekick? And the bK the Mr Big who stays away from the action but throws in a waiting-move when needed, as in scene 2's 2nd move by Black? Or am I overthinking this?
Edited apropos Jose's comment of 20:14Z: Googling Makeda shows that she was the Queen of Sheba (I knew she was called Balqis; hadn't heard of the name Makeda before). So she's the bQ, then? And Brandon the bishop? And Nelson the wK, then? In scene 1, the wK was mated on h2; in scene 2, h1; in scene 3, either e6 or h8. I can't fit that info to the clues, though.

Another thing that fits in with gcampbell's work is that

One of George Washington's horses was named Nelson.

As to the weapons,

the first one is a flail. So the first letter of the weapon's name labels the file on which Nelson/wN stands, in the diagram.

(Edited to take account of a clue whose significance I hadn't previously realised:)

The body of another teenage girl was found high up a tree, close to the scene of the second murder. She had been hacked to death. By the tree were an axe and a chessboard with this position

Reasoning: The same material as in the previous diagrams: white king, knight, pawn; black king, queen, bishop. This is pertinent because the chessmen other than the kings represent the characters in the drama, and the set of characters is the same as before. As in the previous diagrams, Black's queen and bishop are on the same file, with the bishop one rank higher than the queen -- perhaps because the bishop represents the superior officer. These black pieces are close to the pawn because "When investigating a corpse, they like keeping as close as possible to it", and the pawn represents the corpse. The previous diagrams solved as "Black to play and mate in $n$" problems with $n=2, 3, 4$ respectively; thus $5$ here.
The clue "Both detectives are left-handed" has just struck me -- now I guess that bishop and queen should be to the left of the pawn.
The problem solves as 1... Qg2 2 Nb4+ Bxb4 3 Kh5 Be7 4 Kh6 Qg8 5 Kh5 Qg5#

Thanks to another observation by gcampbell, that

in each scene the pawn is where the knight was in the previous scene. All other reasoning is as before.

Another body was discovered, a little way above where the previous victim was found. Again there were traces of gunpowder. By the tree was a chessboard with this position

The problem solves as follows:

Not the answer you're looking for? Browse other questions tagged strategy story knowledge chess or ask your own question.