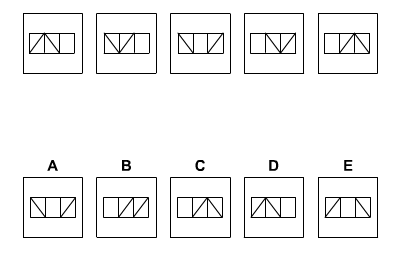 Can someone explain me the logic behind this? I think it is hard.

The question is: What comes next in the pattern? (out of the 5 possibilities)

As far as I can tell, the answer is 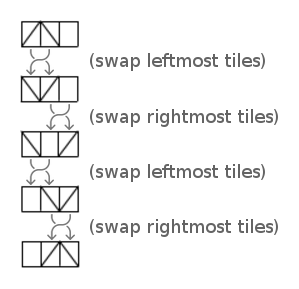 To get the sixth configuration, we need to swap the leftmost two tiles again:

Giving us answer E.
Additionally, the sequence cycles after this, so if we swap the rightmost two tiles again, we end up at the starting configuration:

I liked this IQ puzzle, because I was stuck on thinking the tiles were inverted in some steps for a while, leading me on a search for complicated patterns, while it was a fairly simple pattern after all. Nice trick question :P

Think of the two parts as two tiles like in a shuffle puzzle, then the pattern goes flip slide slide, flip slide slide. The GIF below (made by @Decent Dabbler) demonstrates the cycle.

Huge shout out and thank you to @Decent Dabbler for making the GIF for me.

There are 6 ways to arrange those square shapes. One is missing, which is E

So the answer is:

That makes the fourth, fifth and sixth pattern equal to the first, second, and third, rotated by 180 degrees.

It's amazing that almost everyone picked the same pattern, but for totally different reasons!

Yet another possible explanation for the answer being

View the tiles individually, and look at how they move. Both tiles can be seen as repeating the same pattern: 1,2,3, 3,2,1

If you continue this pattern, the next configuration is E, then it loops back around to the first picture.

I think the steps from first to second are: turning the whole thing 180 degrees and then moving the blocks one to the left (the block on the left moves around and becomes the block on the right). The steps from second to third are in reverse order, first move the blocks one to the left and then turn the whole thing 180 degrees. Then the steps from third to fourth are the same as from first to second and so on. It's an alternating pattern. If you use the same pattern on the second one as you did one the first one, you would get the first on again.

I got the same answer as all the other responses.

I treat the lines as an arrow "aiming" in a direction. In effect, the arrow is spinning in a circle or hexagon. Pattern: up-left, down-left, down, down-right, up-right... up.

E, since all the patterns have their inverse except pattern C.

user590727user590727
11
$\endgroup$
2
Add a comment  |
Highly active question. Earn 10 reputation (not counting the association bonus) in order to answer this question. The reputation requirement helps protect this question from spam and non-answer activity.