Your task is to repair the clock face by moving individual numbers one by one around the clock's perimeter and also using the four drawn lines that form a cross. In the center of the cross there is an initial empty place. The 12 numbers and the empty place form 13 connected fields.

How many and which moves do you need to repair the clock by moving the numbers according to the rules above?

(Resembles a bit Loyd's fifteen, there are many permutations available so using brute force algorithms does not seem to work. I am also quite interested if an algorithm for solving this puzzle can be found, so a strategy for solving it would be handy. I have not solved it yet but I suppose that a simple solution exists.)

I have added to GitHub a small app that allows interactively solving the puzzle. https://github.com/Karluzo/ConfusedClock. There is .exe file WindowsFormsApplication1.exe .NET 4.5, Windows (I did not name it well...) - there you can see, how I try to solve it. It seems to me that there are always 24 ways to go (12 clockwise and 12 counterclockwise). But I might be mistaken. Yes, I am mistaken, I have simplified it too much. A new version with free movement on the GitHub as WindowsFormsApplication2.exe

I'll try to add the most accurate translation I am able to produce of the original text:

The picture shows a clock face with numbers inscribed into rings. Above them the clock face in an oval is confused (1-12). Your task is to repair the clock face by moving the single digits along lines - around the perimeter and along the cross with an empty ring in the middle - consists of 13 fields with links. How many moves it takes to make a crazy clock face fixed to normal hours. Describe the steps to solve the puzzle.

(I guess single digits does not mean, that you move 1 and 0 of 10 separately). As long as I did not solve the puzzle myself I do not feel to be the right person to interpret it, but I will try to find the true meaning of the text. On the GitHub there is also the non-translated version

Here's a solution which I believe is optimal - 35 moves overall:

I solved it with a computer program. The algorithm is pretty naive - at every step I build a list of possible states using all possible changes to the states of the last step. Of course, only the following 4 things are considered steps - moving a number into the centre, if it's free (one of 4 options); moving out of the centre, to the free slot; moving 3 numbers clockwise, if possible; or moving 3 numbers anticlockwise, if possible.

Also, I remember the previous step for each state, so I don't just retract it. And, once I've built the whole list of possible states I discard any duplicates before moving on to the next step.

At the final step I have 781086 possible states, one of which is the solution.

Here's the code. To use just run solve():

(Now runs on Python 3.5 too. Thanks to Jonathan Allan.)

I also wrote a quick solver to get a

In finding the solution it built all $5,379,522$ unique states reachable using up to the number of moves required (including the start state; stopping once the solved state was found). Each state is saved with a reference to the state from which it was reached, which allows the print of the path taken.

Here are the steps that can give one very unoptimized solution :

I think that shorter solutions can be found by bruteforcing.

Sorry for no visuals, I'll try to add some later.

The solution is rather lengthy:

EDIT: Updated, I seem to have written some steps wrong by accident. Bold steps were changed.

Somewhat more general answer, since the specifics are well taken care of. Warning: Math ahead.

Note that any sequence of moves which could possibly put the clock into the correct position (assuming the center of the clock starts out empty) can be divided into a number of segments, each of which takes the form:

2. Rotate every number around the circle exactly once either clockwise or counterclockwise, leaving the same space at 3, 6, 9, or 12. Repeat zero to five times.

3. Rotate a group of three, six, nine, or twelve numbers adjacent to the position you just moved the one space either clockwise or counterclockwise.

4. Return center number to the gap, which will have shifted three, six, nine or twelve spaces around the board, therefore still being reachable from the center.

Now let's do a bit of math- specifically, let's look at Permutations.

We can think of our lists as being a permutation written in cycle notation, and our sequences of moves as being more permutations applied to the existing one. As a couple examples:

The moves we make in the first example of the above section can be written in cycle notation as the permutation:
(10, 1, 12)

The moves we make in the second example of the above section can be written as the permutation:
(12, 1, 4)

More generally (proof not hard, but left to reader for brevity), we can say that:

Note that a property of permutations is that they can be decomposed into transpositions. In our case, this decomposition is especially simple:

In particular for the given starting set (proving Angkor's result, because why not):

This method could stand some fine tuning as it still relies a bit on intuition and while it happens to come across an optimal solution in this case I can't think of a reason why it should in general, but it generalizes across any starting or ending position and it should generalize easily with some proof finagling across any layout of clock.

1. Put the 1 at the center of the clock.
2. Move the 12, and every other number (so anticlockwise). And move the 12 again. At this point you've moved each number once beside the 12 that you moved twice. At this point you should have that: 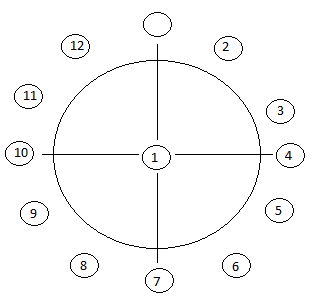 I must be missing something... Is this the answer?

That should end up with a correct clock face...

Aha! I was missing something... Look at comments :-)