The summer term exams must go on

The staff at Farthingbottom School are in a bit of a fix: the summer term exams are due to start soon, but the exam papers haven't arrived yet.

Dr Linnaeus (the Head of Biology) takes care of everything every year, but a couple of weeks ago he was taken seriously ill and he's still lying unconscious in hospital. Nobody knows if the papers have even been sent to the printers yet, or which printers are supposed to be dealing with them. All the details are on Dr Linnaeus' computer. Of course, nobody knows his password.

All the staff have to go on is the blackboard in his study and a comment during a discussion on passwords in the staff room some time ago where he mentioned that he favours those that are 20 characters long. 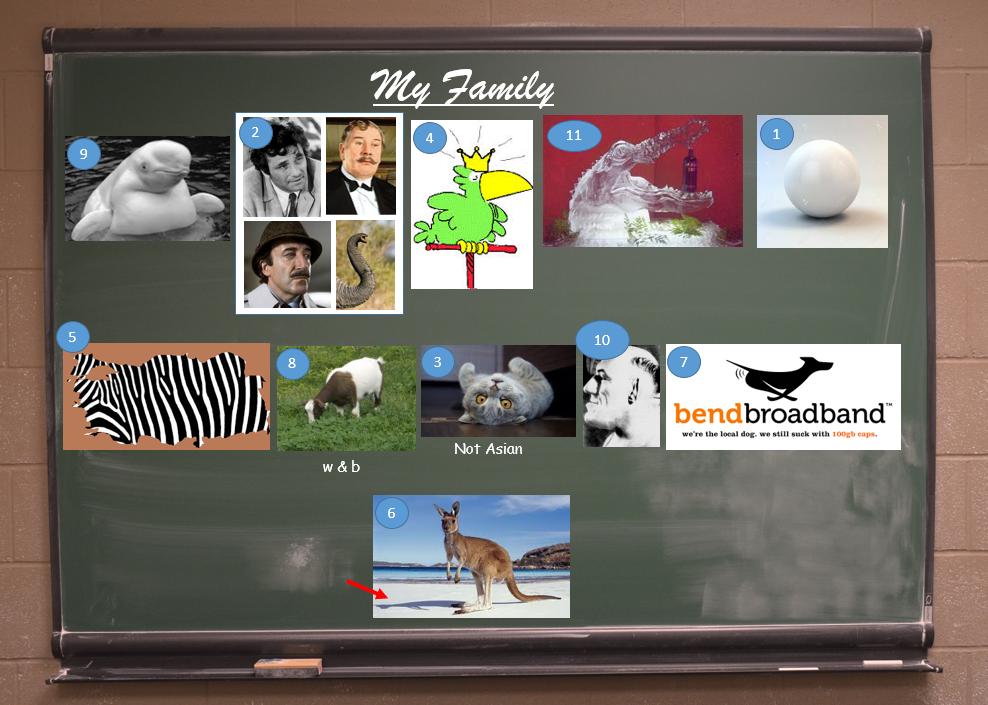 2 (listed in order from top left to bottom right (across then down)):

Trunk a.k.a. an elephant nose

Zebra stripes and map is of Turkey, so a Zebra Turkeyfish family = Scor[p]aenidae

This is an Upside-down Catfish ignoring the Asian upside-down catfish, they all share the same family = Mo[c]hokidae

Southern Sandfish which lives off the coast of Australia/New Zealand (hence the kangaroo), family = Lepto[s]copidae

All of the clues are types of fish

Take the letter at the specified number of each fish's family in order shown on the blackboard and you get DORYSPECIES. Dory from Finding Nemo is a royal blue tang which the species name is Paracanthurus hepatus, which contains 20 characters

Footnote: @Neon612 helped find a bunch of the clues

Not the answer you're looking for? Browse other questions tagged visual knowledge science or ask your own question.

7
Who's been stealing my H?

5
This puzzle you must solve
5
Summer School Riddle
6
Find the missing term!
6
Find the Pattern in Symbols and Answer. What must be the answer and Why
2
A summer day last year
7
Diagrams of a Summer
9
Summer Break - It's a *wrap*
4
What must we remember in October 2020?
5
A mathematical term