Gah! I used to be the brilliant one at Verba Retorta University, but ever since that damned Professor Wordberg showed up, there's been nothing but trouble. And it's all his confounded machine's fault!

He's a fraud – he has to be – I just needed enough evidence to prove it. So, last night, I... Look, it's not important how I got in there, but purely by happenstance, I found myself in Wordberg's lab after everyone else had left (and, as a tenured professor, I can assure you, I have every right to be there). Anyway, with no one else around, I took the opportunity to gather the proof I needed. I grabbed four words I happened to have in my pocket, loaded them up and started up his alleged "word transformation engine"...

Here's the video footage I took of the process (sorry for the poor quality, my phone's a little dated):

The words I put into the machine were smallscale, nosier, apron, and outputs.

Anyway, after a lot of show, the machine's output was unceremoniously dropped into the bin at the bottom. But this is where things went wrong, and where I'm hoping you can help... The most obvious problem is that the machine appears to have actually worked(!), but right now that's not my concern. The immediate issue is that there were already words in the bin at the bottom and I don't know which are mine and which were already there. To make matters worse, some of them have been broken in the fall, and again, I don't know if they're mine: 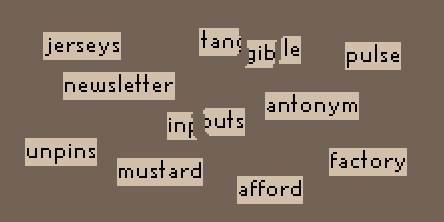 The words in the bin appear to be jerseys, tangible, pulse, newsletter, inputs, antonym, unpins, mustard, afford, and factory.

Now, under no circumstances can Professor Wordberg know I was in here, so in order to hide the evidence, I need you to help me work out:

UPDATE: I wanted to confirm my suspicions, so I snuck into Wordberg's lab with a modified X-ray device, and I was able to verify via video that my descriptions below are indeed correct. I was only able to capture video of one of the words Alconja tried, but here it is:

Looks like this very cool machine has a bunch of components wonderfully hinted at in the illustration.

It seems that first the input word is

split into two parts with one part following the left path and one following the right path. There is some ambiguity in which half goes to which path.

is an antonym machine, represented by the full change in color from a dark red to a light red. The antonym is then stored at the bottom of the left path until the word on the right path is complete. When the final right-side product is ready, the left-side antonym is flipped and stamped in the middle.

has four components. The first component (light blue) rotates a single letter. The second component—the green box with pistons—picks up one letter and moves it elsewhere. The third component (red plus sign) increments the value of the first remaining letter by one. And the fourth component (the final blue-bracketed component before it drops the word into the bin) stretches the remaining letters out to allow the antonym stamping in the middle.

So the first pair of words is

smallscale is split into "small" and "scale"
The "small" goes down the left path and is converted to "big".
The "scale" goes down the right path and the "c" is rotated 90° to become an "n", leaving "snale".
One letter of "snale" is moved to a new position, leaving "sanle".
The "s" is incremented to become "t", leaving "tanle".
"tanle" is stretched to "tan---le" and big is reverse-stamped into it to make tangible.

And the second pair is

With the third pair being

apron is split into "apr" and "on"
The "on" goes down the left path and is converted to "off".
The "apr" goes down the right path and the "p" is rotated 180° to become a "d" leaving "adr".
One letter is moved from "adr" to give us "ard".
The incrementing component malfunctions and no letters are incremented! As Guntram Blohm pointed out, this can be seen in the animation during the "apron" sequence.
"ard" is stretched to "a---rd" and off is reverse-stamped into it to make afford.

And the fourth pair is

outputs is split into "out" and "puts"
The "out" goes down the left path and is converted to "in".
The "puts" goes down the right path and the "u" is rotated 180° to become an "n", leaving "pnts".
The "t" from "pnts" is moved leaving "tpns".
The "t" is incremented to become "u", giving us "upns".
"upns" is stretched to "u-p-ns" and in is reverse-stamped into the blank spaces to make unpins.

If all that's true, then the tile we need to replace is

which we could do by entering

"shutdown" will be split into "shut" and "down" The "down" goes down the left path and is converted to "up".
The "shut" goes down the right path and the "u" is rotated to become an "n", leaving "shnt".
The "s" from "shnt" is moved leaving "hnts".
The "h" is incremented to become "i", giving us "ints".
"ints" is stretched to "in--ts" and up is reverse-stamped into it to make inputs.

All this leads me to conclude that when Alconja gets around to making a word machine, it'll far outperform Professor Wordberg's and restore Alconja's place in the Verba Retorta hierarchy!

Not the answer you're looking for? Browse other questions tagged word visual or ask your own question.

9
The unsolvable puzzle (a colorful and challenging jigsaw 2.0)
11
A mysterious disappearance - final part
5
Needles in a Haystack (Inverse wordsearch)
6
Colorado Carl and the Lazurite Lizard - Part Two
11
The Ultimate Deusovi Honeypot
24
12 hidden clues in just one paragraph!
13
One code to rule them all
9
Weather or not?
20
PSE Advent Calendar 2021 (Day 24): The Witneys - Your Comfy Puzzles