I have a friend who is a self-proclaimed cryptobiologist. Okay, maybe I don't, but if I did, I like to think she would have presented me with this puzzle:

The message is the answer to "What is my favorite recently established (though somewhat contested) idea in biology?"

Also, this "friend" of mine is a much better biologist than she is a cryptologist. In fact, she is just about as novice in the "cryptology" scene as one can get.

None of this is required in order to solve the puzzle, but it will probably help.

She told me "You silly chemist, to get you started, consider the elements hydrogen, nitrogen, oxygen, and the halogens; apply their strategy in your strategy. Or consider the behavior those nucleobases you're talking about.

Do you notice any pattern in the numbers? It's small, but it's there. Each number by itself won't mean much.

lateral-thinking number-sequence knowledge science
Share
Improve this question
edited May 4 '16 at 20:59
SendersReagent
asked May 3 '16 at 12:06

The secret message (and answer to the recently established but contested biological theory) is:

The number strings are perhaps better interpreted as doublets (or maybe alleles based on the Punnett square hint). If you break up the numbers into doublets, you could rewrite the string as:

This leaves only four possible doublets, 11, 13, 22, 44. Possibly those could map to A, C, G, T. But given the others hints, it looks like some sort of bonding may need to be used. And a Punnett square represents crosses between two individuals and the potential offspring they could have, so perhaps we're supposed to cross two individuals with these "alleles" but there are still so many possible directions...

Thanks to the nice work by Element118, we can use:

A Polybius square to translate the pairs of numbers into DNA bases:

Then we need to:

Transcribe the DNA (take its complementary strand as RNA, where A pairs with U and C pairs with G)

And since biology has its own:

Triplicate code for converting RNA sequences to amino acid sequences (see pic below) and since amino acids can each be represented by a single letter (again, pic below), we must then translate the RNA sequence. 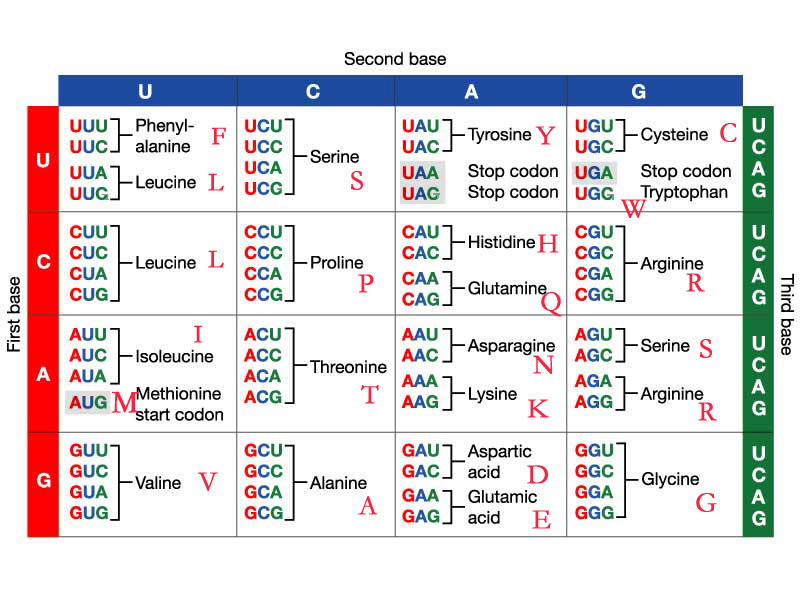 Doing so, we get:

From Dan Russell we have:

Interpreting the pairs as a letter from the above table we have:

I seriously think S should be something else, like T or U.

I suspect the J should be removed from the table, as J does not appear in the periodic table.

Maybe the numbers correlate to

Not the answer you're looking for? Browse other questions tagged lateral-thinking number-sequence knowledge science or ask your own question.

11
A puzzle inspired by “Cryptobiology? Biocryptology?”

11
A puzzle inspired by “Cryptobiology? Biocryptology?”
22
Bob's unnecessary trip to the shops
23
Hacked maps, back in the UK