Game of Billiards: Kill the Planets Too 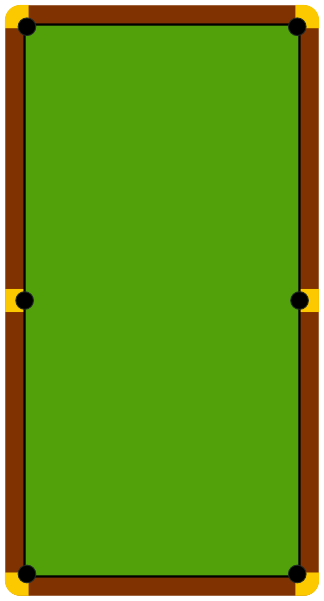 You can place the balls anywhere on the table (except the pockets), but all sixteen of them must be used. Then you will have one shot.

I think you already know what your goal is.

In a single shot, you have to pocket all of the balls except the cue ball.

The cue ball itself must never go down a pocket, not even after the others are pocketed.

Parameters for the table:

You have to provide a mathematically accurate explanation why your solution works.

It's not enough to present some random arrangement and claim that it is correct “because it works in Universe Sandbox 2”, or whatever simulator you prefer.

This puzzle shouldn't take much time to solve, so let's make it a popularity contest. The accepted answer will be the one with the highest number of votes (up minus down) after a week.

You can use a brute force algorithm to solve this puzzle if you want, but I can't even imagine how you could possibly write one.

Since this is already a long answer, I'll refrain from too much math detail. I will use an angular system here where due north is $0$ degrees, south is $180$ degrees, etc. Also, I will use a cartesian coordinate system where the bottom left of the table is at $(0,0)$ and the top right is at $(48, 96)$ in inches. note that I'm assuming the answer to my question in the comment I made is 'yes'.

The idea is to shoot the white ball so that it just skims each of the $15$ balls in the arc. The initial direction of the white will be at an angle of $360 -q$, where $q$ is some small number, such that the white barely contacts the first ball on the right hand side and imparts a very small amount of momentum to it in the $270$ degrees direction (towards the left middle pocket). The white will then reflect off the first ball at a slight angle and barely hit the second ball, imparting a small amount of momentum to it in a direction which has a slightly bigger angle (e.g $270.001$), and so on for each of the $15$ balls. Then the white will head towards the top cushion at a small positive angle, bounce off the top cushion and head towards the lower right corner. It will then hit the last ball head on, the white will stop dead and the last ball will go in the pocket. After this, the rest of the balls will still be gradually moving in the top half of the table.

Since each of the $15$ balls has a slightly bigger angle than the ball below it, and because angle of incidence = angle of reflection, none of them will ever collide. In fact they will be gradually diverging. The balls which don't go in the left middle pocket will bounce off the left cushion, then the right cushion, then left and so on until they eventually make their way to one of the top corner pockets. Since each has a tiny angle, they will all end up in one of those pockets, the top ball of the arc first, then the next one down and so on. Since the entire arc at the beginning could be moved to the left or right, that means it will be possible to choose it's position such that the white stops dead upon hitting the last ball.

EDIT: A rough demonstration of what happens in the upper part (with a very large curvature), made using this program:

4
Find the magnet among the two rods
15
Bars in the river
5
The Random Rube Goldberg Messup
0
The driver and the chickens
3
Figure out the ? in the figure below
11
In which direction does the water flow?
9
Breaking Balance (Part A)
6
The Resistor Game Show